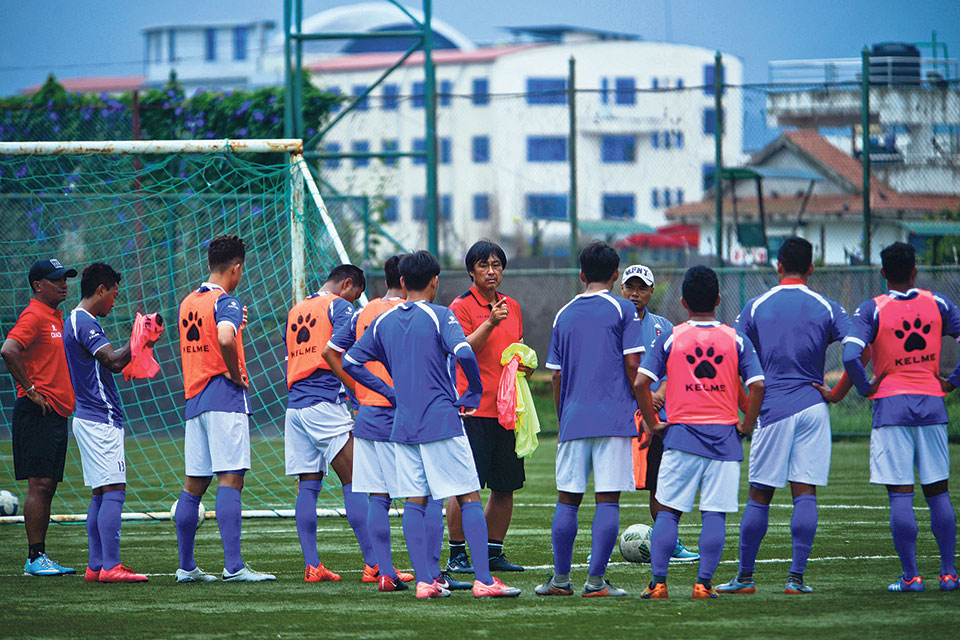 Nepal national team head coach Koji Gyotoku instructs players during a training session at the ANFA Complex in Satdobato, Lalitpur on Wednesday. Nepal will leave for Thailand for a 10-day training camp on Friday, where it will play against Thailand U-23 team and an A-division Thai outfit before leaving for Indonesia to participate in the 2018 Asian Games. Photo: Bijay Gajmer

KATHMANDU, Aug 3: The Nepal national football team has aimed at winning the SAFF Championship, also known as the SAFF Suzuki Cup, which will be held in Bangladesh from September 4 to 15 after the Asian Games, in which it targets to at least reach to the second round from a group which consists of Japan, Vietnam and Pakistan.

Nepal is leaving for Thailand on Friday for a 10-day camp for the preparations of the Asian Games which will be held in Jakarta and Palembang in Indonesia from August 18 to September 2.

Nepal will play two practice matches against the Thailand U-23 team and an A-Division club of Thailand before the team travels to Indonesia.

Nepal is pitted in the Group A of the SAFF Championship and will take on the host Bangladesh, Bhutan and Pakistan, while India, Sri Lanka and Maldives are in Group B.
Senior team captain Biraj Maharjan said that the target is to win the SAFF Championship and the Asian Games will help in the preparations for the Bangladesh’s edition of the tournament.

“It is very important for a national player to play in international games and it is entirely up to us in what we do in the Asian Games. Even though most of the junior players will be participating in the Asian Games, it will help us in the preparations of the SAFF Championship,’’ Maharjan told Republica. “The practice matches will help us a lot in the preparations. We have seen Asian Games as a platform to correct our weaknesses which is very important as we hope to win the SAFF Championship.’’

Maharjan added that the team is going to face strong sides in the Asian Games and they are looking to improve on the previous results.

“Japan is a very strong team, even though it will be their U-23 team, but they played very well in the World Cup too. The other strong side is Vietnam and we hope to at least snatch a point from them and beat Pakistan to get to the second round,’’ Maharjan added.

Nepal has not reached beyond the first round of the Asian Games so far having played 12 games and losing all of them. Nepal made its debut in the tournament on 1982, which was the only time when Nepal scored a goal. Nepal has conceded 52 goals in a total of four editions it has played in past 36 years.

Assistant coach Bal Gopal Majarjan said that Nepal had held a two-month long training camp at the ANFA Complex in Satdotbato for the preparations of the two tournaments and the team is confident in winning the SAFF Championship and wants to at least get to the second round of the Asian Games.

We are targeting to snatch a point from Vietnam and beat Pakistan, but it will be very difficult to defeat a side like Japan, but we will do our best to make it happen.’’
Nepal won its first major title in 23 years after clinching the 2016 Bangabandhu Cup under the current assistant coach Maharjan, and also lifted the 2016 AFC Solidarity Cup under the current head coach Gyotoku Koji which was Nepal’s first AFC title. Also, Nepal won the gold medal in football at the 2016 South Asian Games defeating arch rival India 2-1 in the final.

Also assistant coach Maharjan said, “We will take feedbacks and improve from the performance of Asian Games in the SAFF Championship. Asian Games will be a big help for us. We will go to Bangladesh with an aim to win the SAFF, and defeat every team.’’

As the national team is leaving for the South Asian and the Asian level competitions, some of the key members of the team have said the recently-introduced no-relegation system in the league being held after a gap of five years is going to harm Nepali football.
Captain Maharjan criticized a recent decision of the All Nepal Football Association (ANFA) to organize a no-relegation league saying that such a policy would kill the spirit of competition in players, which is the main beauty of any competition.

“In my opinion, a no-relegation league is a huge loss for a player because there will be no competition when there is no demotion to the second division. The comparatively smaller clubs won’t take the league seriously and they will surely form an average team in the tournament,’’ Maharjan further criticized the league. “A relegation-league is a must in a country like ours and the no-relegation system will not, in any way, help Nepali football correct its weaknesses and grow to international standards.’’

“This system with no relegation will surely cause negative impact in Nepali football. All European league have the system of relegation, and those teams who performed well in the World Cup did so because they came through a relegation system. The system has made their national teams stronger as well,’’ Maharjan said. “Even our neighboring countries like India and Bangladesh have relegation league. They are involved in football all year, with better foreign talents.’’

However, the ANFA President Karma Tshering Sherpa refused to comment on the matter.

“Don’t ask me about this subject. You better talk to the ANFA spokesperson because it’s his job,’’ Sherpa quipped.

Two arrested for raping and murdering a minor
33 minutes ago