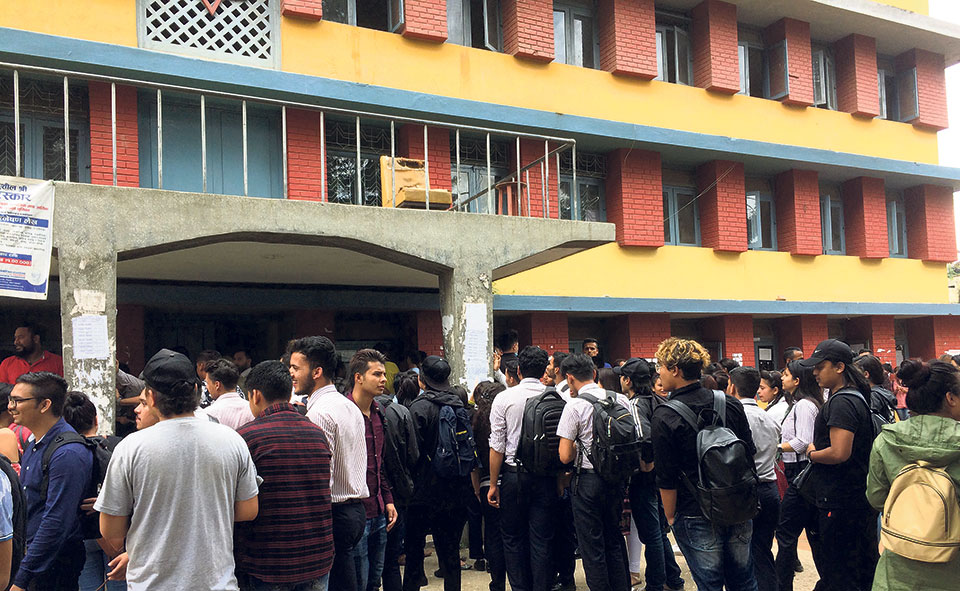 KATHMANDU, Aug 3: Tri-Chandra College, once the pride of Nepal's education, is in dire straits today, requiring urgent renovation to revive its past glory in academic excellence, innovative logistic facilities and other vibrant academic activities.

Lecturers, officials and students said that Tri-Chandra's reputation as the country's first college has been on the wane due to political interference, lack of sound infrastructure and efficient administration. As the devastating earthquake damaged some of its historical buildings, its crisis has further deepened.

Angat Mani Gautam, Nepali teacher at Tri-Chandra says that the campus has been consistently losing its respect and popularity over the years. “When I was first recruited as a lecturer at Tri-Chandra, working here was itself a matter of pride,” he said. “It used to be the best college for courses like the Bachelor of Science (BSc). Today, the quality of education has declined.”

According to Assistant Campus Chief Rajesh Panthi, the number of students in the college is however has been rising annually. According to the latest official records, a total of 12,551 students are currently enrolled at the college. “Facilitating all these students is a challenge but we are doing our best with what we have,” Panthi said. He said that the campus is making best uses of the same infrastructures that were present in 1918 when the college was founded.

Since the inception of the college, Nepal witnessed Rana, Panchayat, Multiparty system with constitutional monarchy and now a republican system and the college produced several ministers but it couldn't get due government attention for the betterment of the country's historical institution, rued an official at the college.

Physical infrastructures at the campus are limited. The April 2015 earthquake damaged college buildings. Class rooms and laboratories are also run-down because of the lack of proper preservation. A campus with thousands of students has no canteen.

Niranjan Timalsina, who did his BSc Physics from the same college, blamed unnecessary political interference and an inefficient administration for the college's sorry state. He says that classes are conducted regularly but aren't managed properly. “Around 50% students don't attend classes regularly,” Timalsina told Republica.

In a recent interview, Professor Dr Pradeep Neupane, Campus Chief of the college told Republica that the college administration alone cannot be squarely blamed for the situation. He said that the government has consistently ignored their pleas to revive the college. “Nominal fees taken from students (Rs. 6,000 annually) can only just cover laboratory expenses,” Neupane said. “Rs 7.5 million provided by the government is just a peanut to run the college.”

Higher education was formally introduced in Nepal with the establishment of Tri-Chandra Campus in 1918. Founded by Chandra Shumsher, it is the oldest institute of higher learning in Nepal. The campus currently has 150 lecturers and 132 staffers.

According to Praladh Khadka, an official there, the college is putting optimum efforts in improving the campus with what limited resources it has. “During the time of establishment, only Bachelor's level courses were available. We now offer masters degrees in various subjects including Geology, Sociology, Microbiology, and Engineering.” He informed that the administration now plans to provide a Master's course in Economics as well. Assistant Campus Chief Khatri said that the institution also plans to develop research laboratories in the future.

Tri-Chandra, located in the heart of the capital is one of the most important assets of Nepali education, and of utmost architectural and historical value. It can still retain its legacy under a proper leadership and serious government initiatives if taken in time.

KATHMANDU, June 7: It has already been 100 years since Tri-Chandra College, the first college of Nepal, was established and from the... Read More...