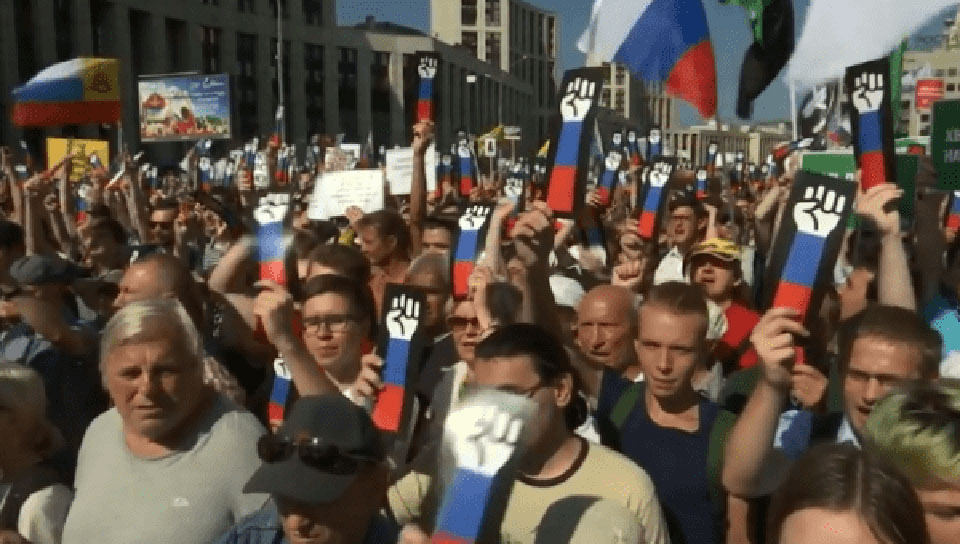 Protests in Moscow against increasing the retirement age for both men and women. Saturday, July 28, 2018 | Photo: Reuters

KREMLIN, July 31: Thousands in Russia protested pending pension reforms over the weekend that would raise the retirement age to 63 for women, 65 for men.

Tens of thousands of Russian protested across the country on Saturday to demonstrate against a controversial pension-eligible age hike in parliamentary debate.

Communist Party organizers said up to 100,000 people showed up to a Moscow rally against the government-backed reform. Observers say the turnout was around 6,000.

Protests took place not only in the Moscow capital but in cities and towns in far eastern Russia and Siberia, says France 24.

Demonstrators in Moscow shouted, "Pension-off Putin!" and carried banners with slogans including, "We want to live on our pensions and not die at work."

So far some 2.9 million Russian citizens have signed a petition against a pension reform bill that would gradually increase the state retirement age from 60 to 65 years for men, and to 63 from 55 for women. The proposal passed its first parliamentary reading last week. If enacted the law would go into effect in 2028 for men, and 2034 for women.

President Vladimir Putin said of the proposal: "Of course this is a very sensitive issue for a large number of our citizens."

He added: "I have faced this question before and I still face it today: which one of the various options [of pension reform] do I like? I like none of those that are connected with an increase in the retirement age. And I assure you that there are few people in the government, if any, who like such options."

The president stated that this is an issue of keeping the pension fund afloat as its expected that there will be fewer and fewer workers contributing to pensions, and a higher number of retirees in coming years.

"Now we have six working people for every five pensioners, but the quantity of the latter will be falling and at some moment the number of workers will become equal to the number of pensioners and then it will fall even further. And at this point, either the whole pension system would go bust or it will be the state reserve fund that we are now using to cover the pensions deficit," Putin explained, according to state media, Ria Novosti.

According to a recent VTsIOM poll, Putin’s approval rating is currently at 64 percent, down from 80 percent in May.

The draft law calls for the pension age to be gradually raised to 63 for women and 65 for men, up from the current Soviet-era norms of 55 for women and 60 for men.

Communist Party leader Gennady Zyuganov said at the Moscow rally that Russian men on average die in their early 60s, Zyuganov said, and "they will all get their pension in their coffins."