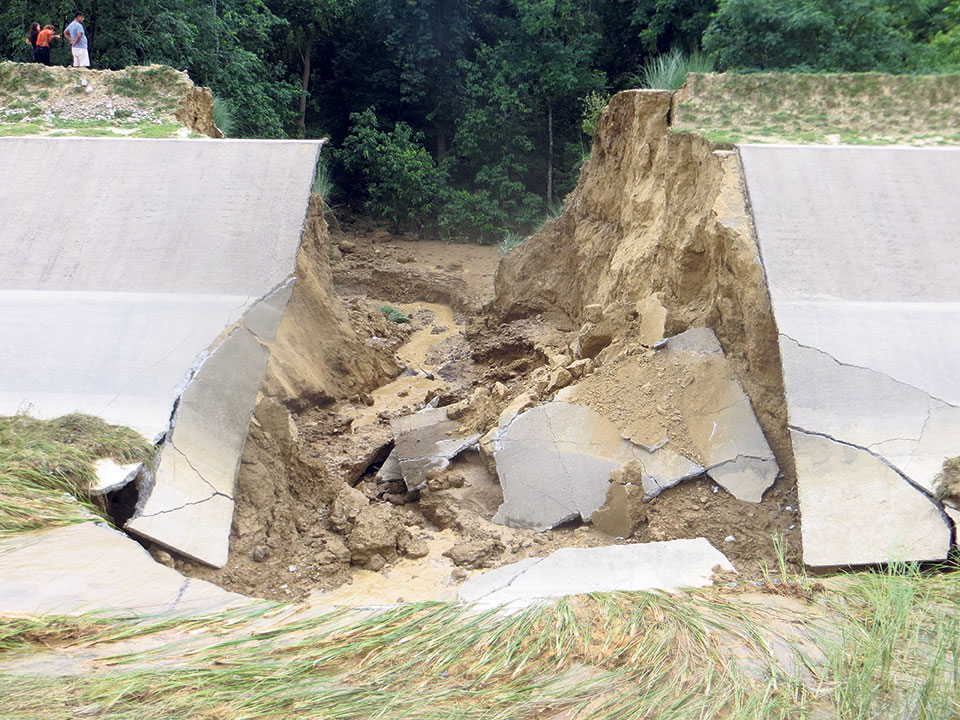 NEPALGUNJ, July 26: Locals have demanded a probe on recurring damage in the main canal of Sikta Irrigation Project.

They made such a demand after one side of the main canal at Changai Khola in Rapti Sonari Rural Municipality gave away during the canal test on Monday. Two years ago also, the canal wall had collapsed near Jhijhari Khola.

Talking to Republica, Shreedhar Upadhyaya, a local, alleged that use of low quality soil in foundation and substandard construction materials were the reasons behind canal breakdown. “The soil used in the canal foundation is dispersible and easily soluble with water. The government should send a high-level probe team to investigate the case,” said Upadhyaya.

He also informed that locals had repeatedly warned contractors to stop weak soil. “But they didn’t listen to us,” he said, adding that their request to the government to prevent the contractor from using substandard materials also feel on a deaf ear.

Mahabir Oli, chairperson of Ward 9 of Rapti Sonari Rural Municipality, urged the government to look into the incident. “People involved in such substandard works must be booked,” he said, demanding that local representatives be included in investigation team.

Kalika Construction, which is owned by former minister for forest and soil conservation, is the contractor of the project.

Locals say Kalika Construction didn’t build the canal on its own. It subcontracted the project to unqualified small contractors, they added.

However, Yubaraj Chhetri, general manager of Kalika Construction, denied the allegation. “We completed the work on our own,” he said, adding: “We have not hired other parties for the work.”

Company officials claimed that the works are still in defect liability period and that the company is accountable for recovery of the damages.

Ramesh Basnet, manager of the project, claimed that the damages are due to use of dispersive soil which is easily soluble with water.

Basnet also informed that the project formed a technical investigation team on Wednesday. “The team has been asked to prepare initial report within three days and detailed report within 10 days,” he added.

The construction of canal had begun in 2004. More than Rs 14 billion has already been spent in the project. However, only 60 percent of works have been completed so far.

KATHMANDU, July 6: The Ministry of Irrigation has a formed a committee to probe defects in the main canal of... Read More...

Only NC has the most acceptable presidential candidate: Karki
6 minutes ago