The city of woe 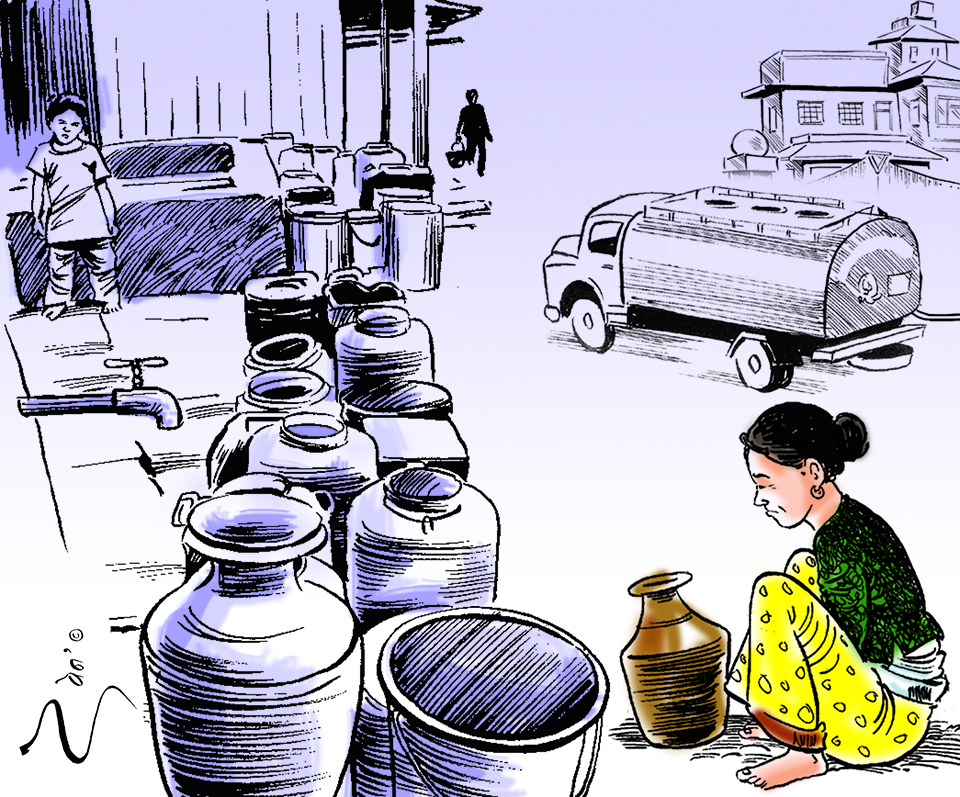 The author is a professor and director of School of Public Affairs and Administration at Western Michigan University, Michigan
news@myrepublica.com

Kathmandu is failing to ensure its citizens access to food, housing, transportation, education, health care, and other basic necessities

One does not need systematic research to conclude that Kathmandu has experienced gross overpopulation. But mixing this plain fact with the process by which this population growth is both generated and accommodated will get us to the core of the problems Kathmanduites are constantly experiencing. This experience includes an unsystematic access to basic amenities (food, electricity, water and sanitation, gasoline, transportation, health care, education etc). While these amenities are nonetheless available, the uncertainty and psychological trauma associated with ensuring their proper access has far reaching implications for life, liberty, and prosperity of its residents.

Population growth is deepening population density, which at 20,288 per square kilometre is one of the highest among major cities in the world, surpassed only by Mumbai and Kolkata (29,650 and 23,900 per square kilometre respectively). One can argue that the high population density should not automatically spell disaster as cities can be structured and managed to meet the needs of city dwellers effectively and efficiently. The most important aspect of this management is physical and social infrastructures upon which city dwellers depend for their well-being, which is where the idea of “organic” growth enters.

In the 21st century, the primary goal of any city (or national or sub-national government for that matter) is to ensure a prosperous and healthy life for all of its residents. That means to enable them to live, move around, work, and raise families with highest possible level of safety, security and freedom. While having a meaningful and fulfilling work, which allows economic security, is an important component of this need, access to food, housing, transportation, education, health care, and other basic necessities is the government’s responsibility. It is only when these arrangements are in proper order that a city can be considered to have served its residents well.

This is precisely where Kathmandu fails in every possible way. Our city planning is perhaps one of the worst in the world. Houses are built without any consideration to safety, security, and other universally acceptable basic requirements. Roads are either narrow or extremely winding, disallowing any outside emergency help (such as police, ambulance, or fire trucks) for the utmost safety and security of residents. Trails conceived as narrow paths to someone’s house are now becoming major roads with the city ordinance imposing almost impossible mandate on these small landholders to expand them to at least 20 feet wide. Open public space considered necessary for the quality of city life is a thing of the past, with almost a third of the Tundikhel spanning Ratnapark to Dasharath Stadium essentially hijacked for a temporary bus terminal and permanent Army headquarters.

While this is the situation, owning cars has become a status symbol of today’s upper-middle class. The traffic congestion and constant need to deal with never-ending breakdown of asphalt and air pollution make today’s aspiring auto-owners question wisdom of their decision to buy automobiles in the first place.

Access to food, water and sanitation, electricity, gasoline, and other consumables is equally troublesome, inconvenient, and unhygienic. Despite enormous reliance on imports for this primarily agro-based economy, food shortage, hoarding, and price manipulation are frequent because of the over-reliance on a few routes leading to other parts of the country or even the neighboring countries. While improving, the water supply and sewer systems are extremely unhygienic and haphazard with the practice of dumping sewage directly into local streams becoming the norm. The dilapidated road infrastructure with never-ending road construction and repair has made movement and life extremely precarious. A dairy, meat, or food-store or restaurant next to a stinky, muddy, and otherwise unwalkable road or sidewalk is now a commonplace for today’s otherwise increasingly educated and self-aware city dwellers.

The economy of this capital city is bustling with stores, homes, businesses, and government offices stacked with foreign goods, from which the government is too busy collecting an extremely high rate of tariff. But the growth in banking and finance, education, and health care services far outpaces almost every other economic activity. While one hears of tightening regulatory environment, the mom-and-pop nature of the almost always for-profit businesses providing these services is making the evolutionary process extremely precarious and painful in the name of competition. Competition is good to the extent that the consumer and producer know full well what is being bought and sold. But this concept is almost dead in Kathmandu as the quality is a rare and sacred commodity that only the sellers know.

One could go on and on with the problems associated with the extremely unplanned and unregulated process of development in Kathmandu (as well as Nepal in general).

These problems could easily be solved had the governments formed after restoration of multiparty system paid attention. Even today, the authorities do not seem much concerned about the chaos in the valley. If today’s process of “organic” growth is not effectively (re)structured, managed, and regulated the situation of this historical city will become even worse.

The author is a professor and director of School of Public Affairs and Administration at Western Michigan University, Michigan

MANCHESTER, March 16: Monaco swept into the Champions League quarter-finals and left Manchester City to pick up the pieces of another... Read More...

STOKE, Aug 20: Sergio Aguero rediscovered his accuracy from the penalty spot in scoring one of his two goals for... Read More...