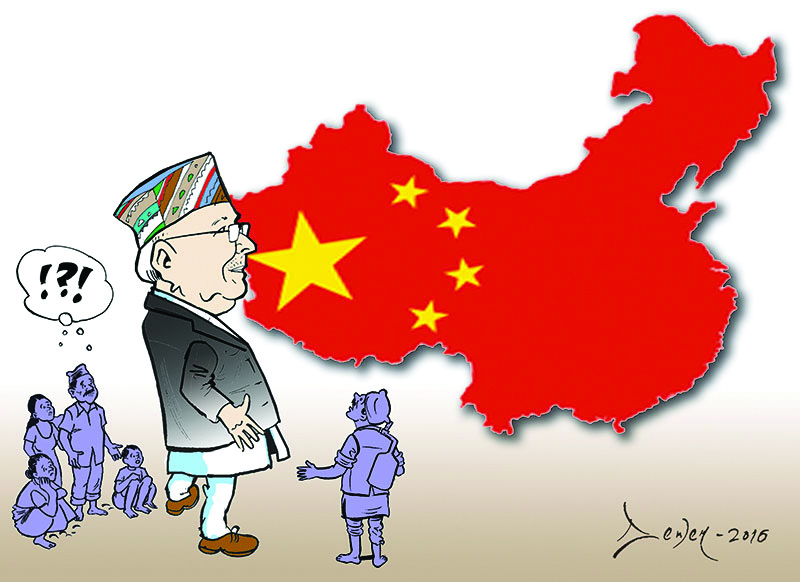 Though China’s presence in Nepal has been growing, it is highly unlikely that it would go out of the way to ‘help’ Nepal by raising India’s heckles

Mith Prime Minister K P Sharma Oli’s two most important foreign visits to India and China over, this is the right time to assess foreign policy implications of the visits. Over the past couple of years, we were bogged down by the blizzard of theories on Nepal-India-China relations mostly loaded with agendas. Following the blockade of 2015 with India’s tacit support, anger and rage were the dominant themes behind such analyses. As pragmatism and reason have finally prevailed, a more balanced assessment can be made.

Nepal’s foreign policy has to be viewed through the prism of changing dynamics of international relations across the world. The world order in medium term is expected to be dictated by mainly two changes: the retreat of US into its own backyard and its ongoing trade war with China.

In a unipolar world dictated by the US, China’s rise in the past decade, almost like a phoenix was bound to make it jittery. Since President Obama era, the US has been trying hard to contain China politically and economically. For instance, one of its strategies was to empower India in the subcontinent and encircle China by using its own and India’s influence on countries like Nepal, Sri Lanka and Bangladesh. But the mercurial nature of bilateral relations among these countries coupled with China’s maneuverability ensured it wasn’t easy to tame the dragon.

Diplomacy is long and arduous process and can be frustrating at times, especially for impulsive characters like President Trump. With the debt level of profligate US rising to an unsustainable level with parsimonious China, it has finally unleashed tariff bomb on China. Though this is expected to hit the US as hard, China is going to feel more pressure since US economy is almost twice the size of China and China’s export to US is far greater than US export to China.

Apart from hitting US with reciprocal tariff, China is in the process of forging trade relations with other countries including India to minimize the losses accruing from trade war. It has already lowered tariffs for more than 8000 Indian products.

The US has also been playing hardball diplomacy with India, which it considered as a natural ally since Bill Clinton era. The raising of tariffs on Indian bikes and steel and the recent postponement of 2+2 meeting with India suggests not all is well between the world’s oldest and largest democracies.

With India and China being the biggest beneficiaries of globalization, both have reached modus Vivendi, though hardly friendship with each other. The informal meeting between Prime Minister Modi and President Xi at Wuhan and the ensuing rapprochement proves both leaders are willing to leave Doklam behind.

Since Zhou Enlai, China has long considered Nepal to be within India’s sphere of influence. Though its presence in Nepal has been growing, it is highly unlikely that it would go out of the way to ‘help’ Nepal by raising India’s heckles at this juncture. What else explains Nepal’s exclusion from Boao and SCO summit?

The joint communiqué between Nepal and China during Oli’s visit clearly shows it is high on optics and low on substance. The landmark Trade and Treaty Agreement signed in 2016 is being dilly-dallied, probably intentionally from both sides. Even though the MoU is signed between the two governments, Chinese railway in present circumstances is a dream deferred as there is no clarity on funding modalities and also most is going to depend upon geological surveys considering the challenges geography poses. Besides, Nepal is yet to select projects for the Belt and Road Initiative (BRI). All these show Nepal is once again back in India’s fold despite Oli’s pre-poll ultranationalist stand. The sad reality is when the global alignment of power takes place, smaller country like Nepal doesn’t have much leverage to negotiate its way.

There is no better way to gauge success of Oli’s China visit than from the recent Nepali media reports. Compared to his 2016 visit which was hailed as a huge success and he was feted as a national hero, this time the mood is relatively somber. The enthusiasm is on the wane and there is a greater realization that India is still our best bet.

Post-blockade, Nepali media cultivated a sense of injury and India bashing became a favorite pastime of few in media. Imaginative theories about how China could be used as a hedge against India were produced on daily basis. Few intellectuals found space in liberal Indian media and in a self-satisfied way used it as a platform to justify how Nepal was veering towards China. One went to the extent of writing how Nepali intellectuals these days go on China-sponsored junkets.

China was painted as above reproach with whom, it was said, Nepal always enjoyed great relations, forgetting willfully the Mustang incident and other instances where Nepal had to toe China’s line. The vehemence with which India was denounced was matched in equal terms by the effusively laudatory references to China. As the news about the dangers of Chinese investment in Sri Lanka, Malaysia and even Pakistan began pouring in those openly inviting China became more circumspect and toned down their rhetoric. With India and China rapprochement on cards, few in media have a tough time justifying their former stance.

In a bid to create political hysteria, media became the purveyor of half-truths and sometimes blatant lies. The space for healthy debate shrunk and media became the disseminator of a particular ideology.

All these denunciations projected with extreme bellicosity lacked conviction. It was clear right at the outset the aim was only to negotiate respectable terms with India. With Oli already finding a way to work with his Indian counterpart, China may have to wait the time when there is a need to prove nationalistic stand by another Nepali leader.

In an interview to Bourke-White after partition, the Quaid-i-Azam of Pakistan, Mohammad Ali Jinnah said in a self-satisfied tone, “Russia is not very far away… If Russia walks in here, the whole world is menaced…” He was stressing on the need for US to pour money and arms in Pakistan to counter Russia. In her book later, Bourke-White attributed the interest of Pakistan’s founder in foreign affairs to the ‘bankruptcy of ideas’ and observed that Pakistan had a policy of benefiting from the disputes of others.

This has a familiar ring in Nepal. Just like Jinnah had no other claim to American friendship than the land of Bolsheviks, Nepal too seems to be on the familiar front vis-à-vis India. With extractive nature of relationship with India, China comes into picture only when Nepal has to maneuver India’s overt interferences and extract higher economic gains. From King Mahendra to BP Koirala to KP Oli, China card is played dexterously by Nepali leaders to prove their nationalistic credentials, while knowing well its inherent limitations.