Main accused in the murder of Ganga Maya’s son surrenders 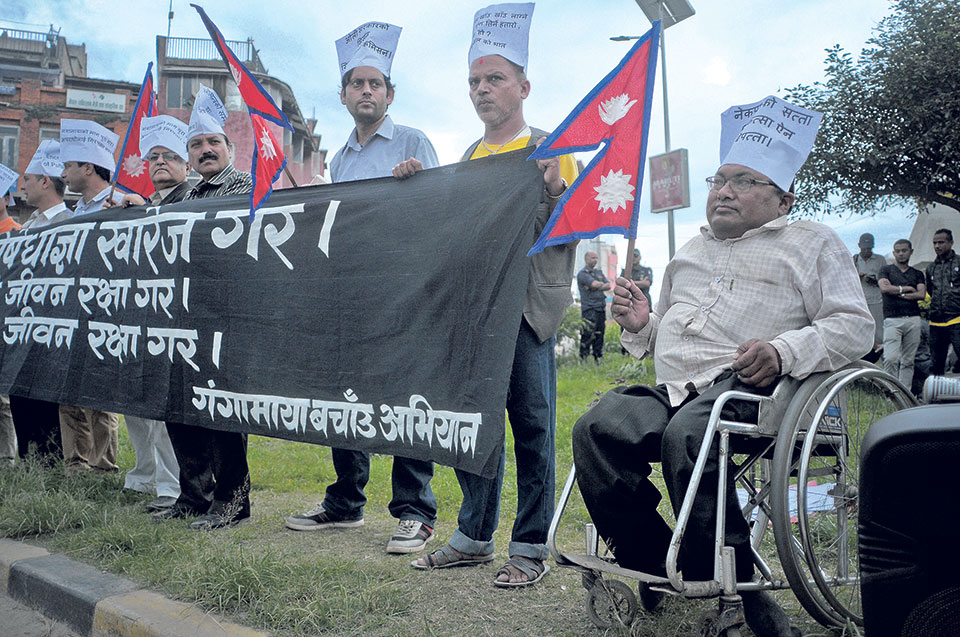 Bijay Gajmer/Republica Activists of the Save Ganga Maya Campaign stage demonstration at Maitighar Mandala in Kathmandu on Sunday. Ganga Maya Adhikari is on a hunger strike at Bir Hospital for over a month demanding justice for the insurgency-era murder of her son by the Maoists.

KATHMANDU, July 9: Government authorities have sent Chhabilal Paudel, one of the main accused in the murder of Krishna Prasad Adhikari of Phujel, Gorkha, to jail shortly after he surrendered before the Supreme Court on Sunday.

Paudel had been absconding since four years after the hearings on the murder case began in 2014.
The surrender comes in the wake of the mother of the deceased, Ganga Maya Adhikari, staging fast-unto-death for over a month, demanding action against the murderers of her son.

According to media expert at Supreme Court, Kishor Paudel, the murder accused Paudel was sent to Dillibazar Prison shortly after his surrender.

Ganga Maya Adhikari has been continuing her fast-unto-death since a long time demanding imprisonment of her son’s murderers. Three years ago, her husband Nanda Prasad Adhikari passed away during his fast-unto-death demanding punishment for their son’s killers.

The 68-year-old murder-accused reached the apex court and submitted a petition to proceed with the case against him by keeping him in prison.

Human rights activists have been demanding the government to grant justice to Ganga Maya by arresting and jailing the killers.

Krishna Prasad Adhikari was murdered on June 6, 2004 in Chitwan, where he had come to meet his grandparents. The then Maoist rebels had taken responsibility for the murder. Just two days after the incident, Krishna Prasad’s father Nanda Prasad had filed a complaint at the district police office, Chitwan, demanding action against those involved in the murder.

A year later on December 11, the brother of the victim, Nur Prasad, had filed a charge-sheet mentioning 13 persons as the murderers at the same police office. Of them, police had arrested 11 persons, seven of whom were released on bail, while the rest were released without bail. Two others are yet to come into contact with the court to face the charge.

Krishna Prasad’s parents had started fast-unto-death, alleging that the government authorities were reluctant to take action against the killers of their son. Father of the deceased, Nanda Prasad, who refused to end his protest, too lost his life on September 22, 2014 in the course of his fast-unto-death. Nanda Prasad’s body is still at the Maharajgunj-based Tribhuvan University Teaching Hospital. The Adhikari family has refused to receive the body until they get justice.

NOC estimates its monthly loss at Rs 4.44 billion due to soaring oil prices in int’l market
22 hours ago