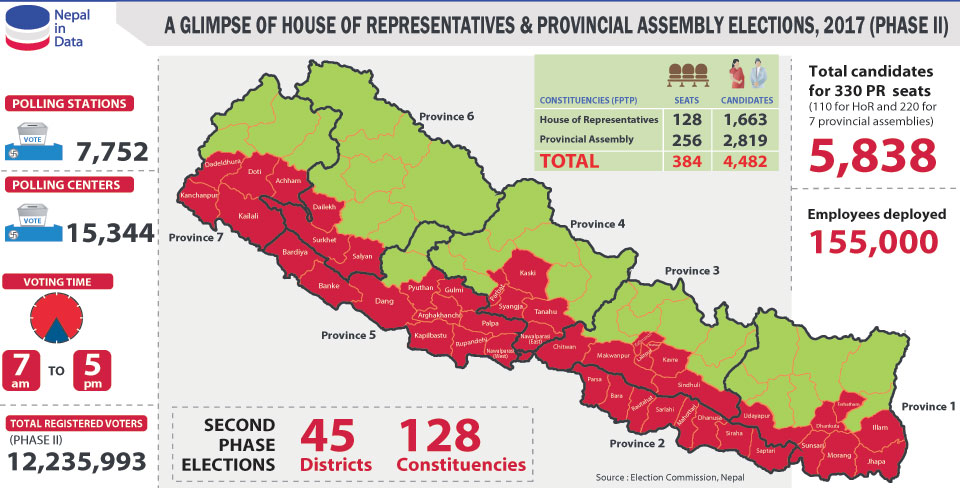 12.2 million voters can participate in the elections

With this, the country will have elected people's representatives for all levels and many expect this will make for greater political stability in coming days. The EC, which has already conducted local polls and the first phase parliamentary and provincial elections in 32 districts, is conducting second phase polls in the remaining 45 districts.

Terming the ongoing parliamentary and provincial assembly elections a landmark in the implementation of the constitution, the election body has urged voters to exercise their democratic right. "These elections will not only establish the federal democratic republic through implementation of the Constitution but also end the protracted political transition," said Chief Election Commissioner Ayodhee Prasad Yadav, adding, "Therefore, EC urges all stakeholders to make the elections a success in order to steer the country towards peace and prosperity."

These elections will not only establish the federal democratic republic through implementation of the Constitution but also end the protracted political transition. Therefore, the EC urges all stakeholders to make the elections a success in order to steer the country towards peace and prosperity.

Heads and members of the 753 local units were elected earlier in the year.  Elected representatives of all levels of government will exercise their executive and judicial powers and collect their own revenue to expedite development activities.

Altogether 1,663 candidates are contesting for parliament and 2,819 candidates for the provincial assemblies under the First-Past-The-Post system. Likewise, 5,848 contenders are in the fray for 110 seats in parliament and 220 seats in provincial assemblies under the PR category. More than 12.2 million voters can exercise the ballot in the second phase.

A day before polling day, the election body gave a briefing on the poll preparations at all polling centers.  People will vote at 15,344 polling locations in the  45 districts. Voting is between 7 am and  5 pm.

Other than security personnel, more than 155,000 poll officials have been deputed for managing the elections.

Issuing an appeal, CEC Yadav has urged all political parties and candidates to foster a conducive poll environment and assist in bringing the ballot boxes to the district headquarters safely.

Two major communist parties -- CPN-UML and CPN (Maoist Center) -- have forged an electoral alliance and promised voters to merge into one party after the elections.

The Nepali Congress also has forged an electoral alliance with the pro-monarchist Rashtriya Prajatantra Party in certain electoral constituencies.

KATHMANDU, Nov 26: After successfully holding the local elections, the Election Commission (EC) is conducting the first round of elections to... Read More...

Oli reaches Bideha of Dhanusha by train
20 hours ago

Govt collected cash fines of Rs 3.53 million from unscrupulous traders in past two months
14 hours ago