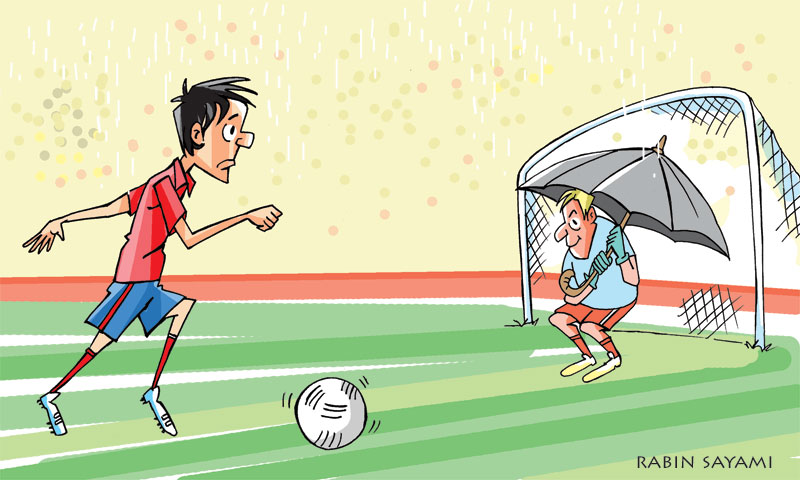 KATHMANDU, Aug 26: Tribhuvan University's football team had travelled to Russia (then USSR) following an invitation to play friendly football matches against the state teams of Russia. Though the Nepali team travelled under TU's banner, it was studded with full strength of the national team. Teams from Tashkent, Samarkand, Naroi and Novosibirsk states were Nepal's opponents.

Nepal was scheduled to play the first match against Tashkent and the stadium was packed with thousands of Russian spectators. Tashkent scored seven goals in the first half. The hapless Nepali team  was completely restricted to its own post for almost the entire first half. There was a sudden downpour soon after the break. With no excitement in the one sided show, all spectators had left the stadium before the break.

After knowing the opponent's level in the first half, the Russian team felt pity to add other goals. Meanwhile, Nepal got a rare chance to take the ball out from its own half to the opponent's half for the first time. And Krishna Thapa was running with the ball. While he looked at the opponent's goalpost, he saw Russian goalkeeper standing in goalpost with a wide open umbrella to protect him from the rain. He even looked reluctant to throw away the umbrella despite seeing the opponent approaching with the ball. Nepal eventually lost the match 7-0, veteran footballer Krishna Thapa recently shared the incident with Republica.

The 61-year old is a prominent figure in Nepali football and has contributed much to the game as player and coach for more than four decades.

Thapa, who wore the national jersey for the first time in 1976 during the Durand Cup in New Delhi was a member of the national squad that won gold in football during the first SAF Games (currently South Asian Games). He scored the opening goal against Bangladesh in Nepal's 4-1 win over the opponent in the final.

He was among the first batch of Nepali players that competed in the World Cup Qualifiers in 1985. The midfielder-cum-forward took part in a 10-month diploma coaching course in India the same year. In 1987, he was offered a coaching job by the National Sports Council.

While he was deployed as coach, a Czech instructor was impressed with his performance and was again called for the national team while he was 29. Thapa's last tournament in the national jersey was during the Third South Asian Games in 1987 in Kolkata. He retired from the coaching job of National Sports Council three years ago.

Of late, Thapa has been one of the harsh critics of the banned ANFA President Ganesh Thapa. He stood in the forefront in the movement against Ganesh Thapa led by Karma Tshering Sherpa. Former president Thapa was suspended for 10 years by FIFA from any football-related activities.

Krishna Thapa, however, has remained mum since Ganesh Thapa's suspension, although there have been many new developments in football administration since then. An election to replace disgraced Ganesh Thapa has been announced for October 24.

As a critic of Ganesh Thapa, coach Thapa was expected to take a side in the election. But he has opted to remain quiet and neutral. ANFA Acting President Narendra Shrestha and Vice President Karma Tshering Sherpa are expected to vie for the top post of ANFA. And Krishna Thapa is aware of the current scenario.

Thapa wishes both the contenders to work hand in hand for the development of Nepali football. “Sherpa played important role to remove Ganesh Thapa from ANFA, he is committed to free the ANFA from corruption and has vision to develop Nepali football. On the other hand, Shrestha has contributed to Nepali football since a long time and has led ANFA successfully since the ban of Ganesh Thapa. Nepali football has witnessed success under his tenure. So, both of them are ideal persons to lead ANFA,” said Thapa, adding, “I want both of them to work together and forge consensus rather than vie for presidential election. The newly elected president will have tenure of only 14 months,” he summed up.

“If they cannot forge consensus, election is the only way out to choose new president. I just want the new president to work with vision for the development of the Nepali football,” he shared.

Thapa, who was also former head coach of the national team and technical director of ANFA, has urged ANFA to form technical body to look after the technical aspect of Nepali football. Technical body should be given responsibility to appoint coaches for ANFA academy, age group teams and national team, according to Thapa.

“ANFA hasn't got enough technical manpower to look at the technical aspects of the organization,” said Thapa, who wished that ANFA gives priority to former national players for technical aspect of football.

Refuting that he is interested in ANFA executive post, he said, “I am technical person and I want to get involved with players' development. Similarly, my skills are suitable for technical aspects rather than being executive of ANFA,” he clarified.