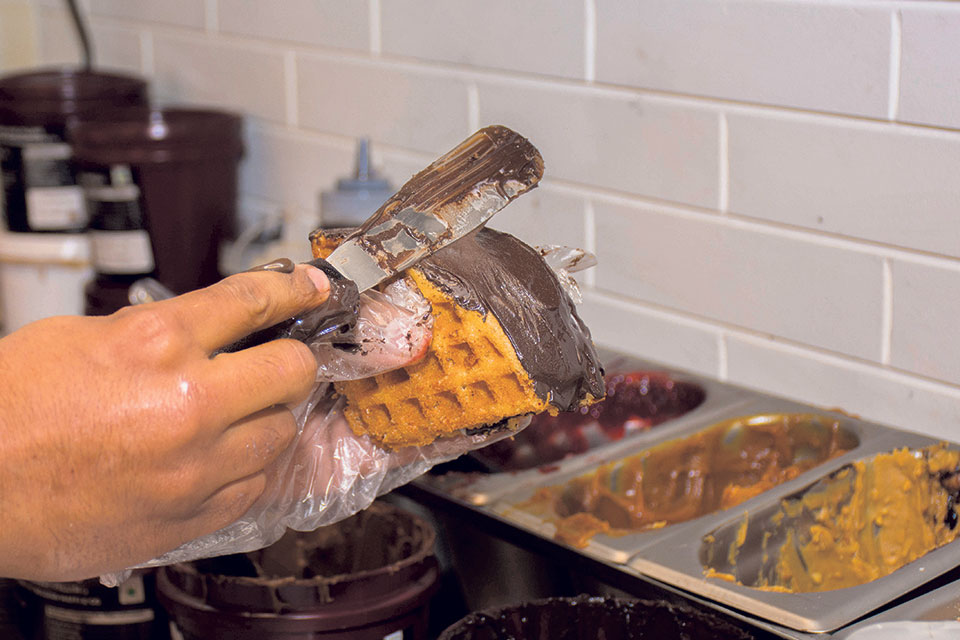 Nestled in a relatively quiet alley at Durbar Marg in Kathmandu is the Nepali franchise of The Belgian Waffle Co. This Indian waffle chain that has over a 100 outlets in India is now branching out and the recent launch of Nepal’s outlet is how they decided to kick start it. And, in just a month, The Belgian Waffle Co has proved to be quite a hit among the Nepali masses.

Ashish Sharma, currently the head executive and distributor for the waffle chain in Nepal, was in Surat in India a few months ago where he tried out a waffle from The Belgian Waffle Co. Sharma says he liked the waffle a lot and wanted Nepalis to be able to enjoy it as well. So he proposed introducing the chain in his home country and fortunately the deal came through and the first outlet of The Belgian Waffle Co opened its doors in Nepal soon after.

However, Sharma says it wasn’t all hunky dory. Opening a reputed brand’s outlet required a lot of hard work and preparation. “There’s a lot than what meets the eye,” he says adding that the staffs were trained for four months prior to the outlet’s launch. “They were taught everything from greeting to etiquettes, and they were taught to make perfect waffles too,” he explains.

Alsha Regmi, marketing executive at The Belgian Waffle Co Nepal, says that the groundwork has definitely paid off as everyone who has come to have waffles has left the store satisfied and happy. Regmi mentions that, till now, there have been no complaints whatsoever. And we think that’s not surprising given the fact that rather than just regular waffles, The Belgian Waffle Co serves waff-wich, which is two waffles served with fillings in between.

Though there are a lot of items listed out on their menu sometimes they cannot serve a few of them because of lack of ingredients or equipments. “Strawberry Creamcheese has been listed in our menu but that’s not available when it’s not strawberry season. We can’t store strawberries for months like they do in India with the equipments we have right now,” says Regmi adding that all the items listed in The Belgian Waffle Co’s menu are 100% vegetarian recipes. The place, in fact, could almost be called vegan had it not been for the Red Velvet Shake and the Cold Coffee that use dairy products. Besides waffles, lemonades, coolers, and shakes are also available at The Belgian Waffle Co.

Right now, The Belgian Waffle Co is not actively promoting their business through social media. They want to publicize their eatery through real time methods rather than through cyberspace. For this, they have been operating stalls during various food festivals that have helped them reach out to more people. According to Regmi, they want to continue with this modus operandi in the future too. “We also have plans of opening more outlets, starting with the launch of one in New Road sometime soon,” she concludes. This shake is a treat for Red Velvet lovers. It has a similar taste to the Red Velvet waff-wich because the same waffle mix is used as flavoring for this shake. It’s a bit heavy though so you might feel full without even finishing half of it. We recommend you take a friend along and share it. This is the most sold item in The Belgian Waffle Co’s menu and just a bite will make it clear why. It’s made with two slices of Red Velvet flavored waffles with white chocolate in between as the filling. The red and white color scheme also makes for a good Instagram picture. This is the waff-wich that you have to order when you are at The Belgian Waffle Co outlet. The waffle in itself has an amazingly chocolaty taste. The white and dark chocolate that fills in this waff-wich blend in very well. We guarantee you will be hooked onto its taste after the very first bite. If you are not a big fan of overly sweet food items, this could be your go-to order at The Belgian Waffle Co. It’s a classic recipe that almost anyone will enjoy. The Belgian chocolate nutella’s rich flavor complements the taste of classic waffles it comes with. 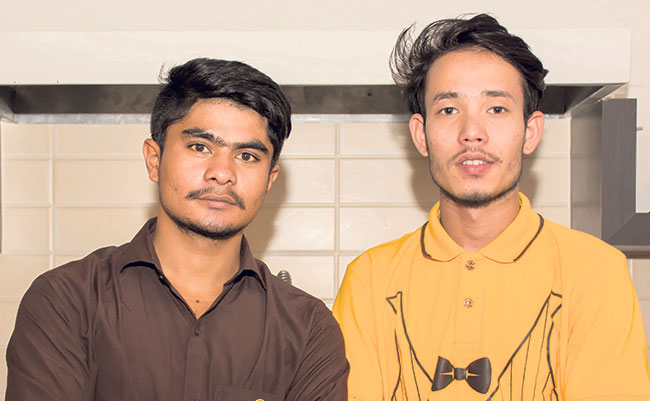 COVID-19 pandemic has devastated the economy. But there is still time to save it from total collapse
9 hours ago

Nepal’s divorce law is unfair to men
4 hours ago

VIDEO: TIA abuzz with passengers after six months  as domestic flights resume on Monday
20 hours ago

COVID-19 pandemic has devastated the economy. But there is still time to save it from total collapse
9 hours ago

VIDEO: TIA abuzz with passengers after six months  as domestic flights resume on Monday
20 hours ago