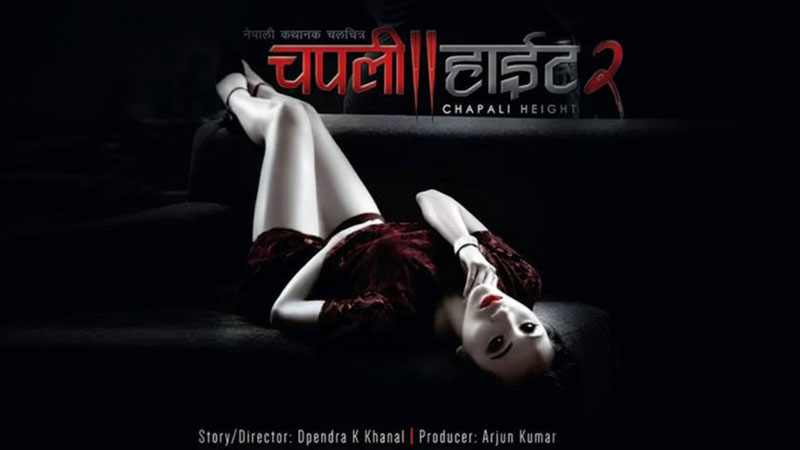 KATHMANDU, Aug 26: ‘Chapali Height 2’ is a new film by director Dipendra K Khanal, who, in recent times, has carved a reputation for being a producer’s darling. With other directors there’s a risk of going over budget but producers have complete trust in Khanal.

He’s someone who can deliver projects under tight shooting schedules and a relatively low production cost. ‘Chapali Height 2’ is his seventh feature film in his roughly eight year long career. No doubt he is a master in handling a film’s logistics but as a filmmaker, he is a lazy storyteller with limited cinematic sensibilities.  In ‘Chapali Height 2’, he has put up an unfocused romantic thriller that never builds any amount of anticipation. Even its climax’s big reveal is something an average viewer can decipher miles ahead.

The film opens inside a moving car. The interior is neon-lit and we only glimpse the driver’s tattooed arms resting on the steering wheel. The car swerves through Kathmandu’s nighttime traffic until it halts in front of an expensive looking club. Only then the driver emerges out but to see his full profile we have to wait. His movement is accentuated with extra slow motion as he gets out of the car, slams the door shut and smirks at a valet.

This sequence is heightened because Khanal doesn’t want to deprive newcomer Ayushman Joshi out of his “hero’s entry” in his very first film.

Joshi plays Abhiman, a rich womanizer. Without wasting time we’re introduced to Abhiman’s sexed up social life. He leers at a girl in a skimpy party dress and couple of minutes later they are making out in a hotel room. But he’s a man with rules. He never sleeps with the same girl twice. “Abhiman doesn’t wear the same underwear twice,” he puts it metaphorically.

Then one day at the same club, Abhiman meets Akriti (Mariska Pokharel). He tags behind her offering to buy her a drink, she declines. He makes advances on the dance floor but she’s not having any of it and decides to leave. An exhausted Abhiman yells at her for ignoring a stud like him.

At this moment, the rejection creates a strange discontent in Abhiman and he’s determined to get the girl. He stalks her on Facebook, finds out where she lives and where she works. Forcefully he scores a date with her which ends up horribly with him getting slapped. And all of a sudden, that simple slap makes a huge impact on Abhiman who makes a complete U-turn of his life. In a flurry of montages we see him buying thick medical science books, watching ‘The Fault in our Stars’ with teary eyes and visiting temples. Seeing these grand gestures Akriti gives Abhiman a chance and the romance is underway.

Writer Shan Basnyat, Khanal’s regular screenwriter, sketches Abhiman devoid of any humanistic shades. There is no dimension in Abhiman that lets the viewers see why he had been a reckless womanizer until now and why this dramatic shift has been caused. His romantic turn towards Akriti feels too mechanical, too implausible. This is just the first half of the movie, where only the breezy romantic exchange between Abhiman and Akriti finds mileage. When the runtime hits mid-point, an abrupt plot twist of a mysterious missing girl (Paramita RL Rana) is thrown in and from then the story ventures into horror territory.

Post interval, ‘Chapali Height 2’ slumbers and Khanal overuses traditional jump scare gimmicks to jolt the audience who try hard to stay engaged. Abhiman stays paranoid for the rest of the movie, popping pills and imagining the ghost of the missing girl. This must have been the meaty portion of the film where Abhiman could’ve investigated into the mystery. However, the plot is so paper-thin that Khanal has no space for an active protagonist.

Ayushman Joshi looks the part, only if the writing of the film had lived up to his charms. He’s made to act so hard that he’s downright goofy than vulnerable in his emotional scenes. And listening to Mariska Pokharel recite her lines in an unchanging tone is a complete downer. It appears as if while dubbing her voice for the movie, she read the dialogues from the script in one take without bothering to put any expressive weight. As for Paramita RL Rana, she’s only there for the scares and an unnecessary song sequence where only her skin glows not her acting chops.

The problem begins with the structure of ‘Chapali Height 2’. Good romantic thrillers grab you in the first few minutes. ‘Gone Girl’, ‘Body Heat’ and ‘Fatal Attraction’ are thrillers that are driven through a coherent tone and a tight script. Each scene builds up naturally towards the climax. Even Vikram Bhatt in his best days knows this fact.

‘Chapali Height 2’ feels like it had been scribbled as a romantic drama and the filmmakers had an afterthought to expand it as a revenge thriller. Whatever may be the situation, the film fails in both counts. Its romantic element is too stale and uninspiring, and in the lack of a coherent script there’s nothing thrilling about it.

When Bidya Devi Bhandari became the first female head of state on October 29, 2015, we had hailed it as... Read More...

KATHMANDU, July 20:The government treasury is now empty following irrational budget distribution at the end of the fiscal year that... Read More...