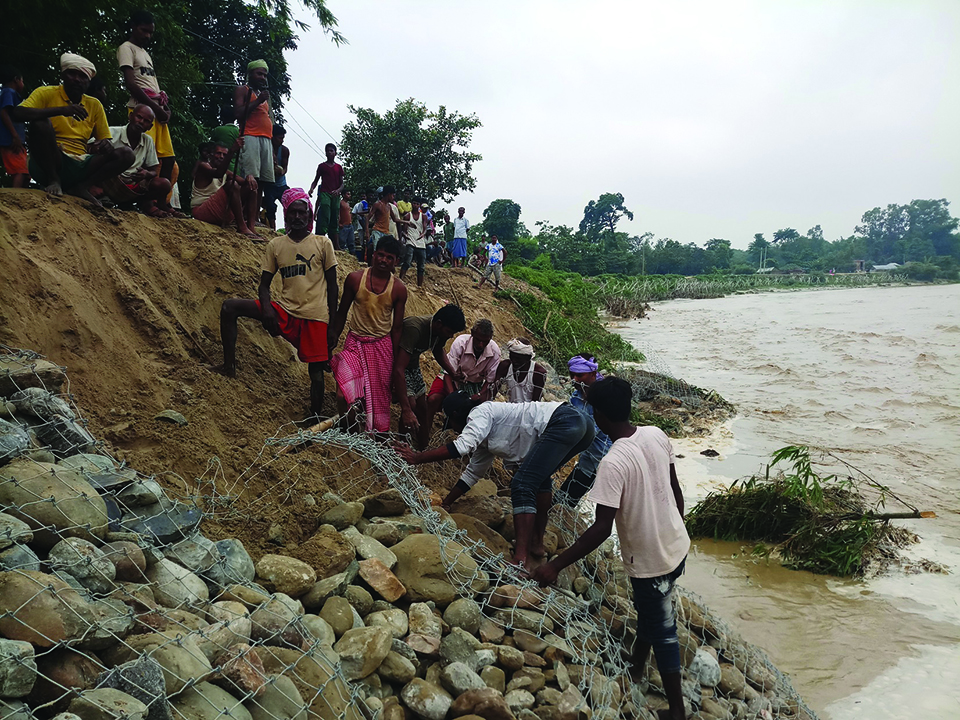 Jitendra Kumar Jha/Republica Workers building a gabion wall on the banks of Khado River in Saptari in this recent picture.

"The dam is very fragile; water has already eroded damn's wall in several places. Last year floods destroyed this whole region and with the dam's wall unrepaired, we fear that it going worst than ever," said a local of Tilathi village, Gajendra Mandal. "Over 10,000 people will become homeless due the floods," he added.

Mandal has not forgotten last year's disaster. Villages were inundated right before his eyes. He was one of the victims.

"In lack of proper preventive measures, flooding affects us every year," he lamented.

Though repairing the Khado dam was kept as a priority this year, so far little work has been done in this regard. On Wednesday, floods have further hit the dam and with that, risk of flooding has increased, Mandal claimed.

Though repairing the Khado dam was a priority this year, so far little work has been done in this regard.

"We can see that the dam is not in a condition to sustain even low volume of water, let alone big floods. In this situation, it is natural for people to feel panicked," says local of Launiya village Dinesh Khanga. He added that locals are attempting to minimize risk but added their measures would not work for big floods.

"We are erecting bamboo and concrete fences to strengthen the dam's walls. However, such measures can help the dam to sustain only in case of low floods. In the case of big floods, such measures will not work," he explained.

According to the office of the Khado River Control Project, the repairing was planned in two phases. But, so far the contractor has not made any tangible progress on it. Kathmandu based, Jay Buland Construction Company had received the contract.

Bishnudev Yadav, chief at the project said that they are working blacklisting the contractor. "The company has done only 10 percent of work, so we are going to blacklist it. We are going in that process," he said. "We are working in coordination with the local administration, police, locals, all stakeholders to repair the dam. At the same time, we are also working on rescue plans in the case of emergency," he added.

He stated the dam has not been repaired despite spending millions of rupees because of the contractor's negligence. The project office informed that it has spent Rs 200 million for repairing the dam and in risk management measures.

Rajbiraj - Kunauli roadway, which connects the headquarters to the southern part of the district and the Indian border side town of Kunauli has been obstructed after the Khado bridge collapsed due to Wednesday's flood. According to Dineshwor Mishra, chairperson of Tilathi Koiladi municipality - 1, delays in repairing the Khado dam and Khado bridge has had seriously affected people's life and businesses. "We must admit that we have failed in this matter. It should have been repaired on time," he said adding that there is not even optional route to the roadblock.

Residents in the area have accused local government for overlooking such sensitive issues and not addressing such pressing concerns on time, Khanga said.

"Businesses have come to a halt, people have been affected, stranded. Now, the loss is going to be huge, hassles are immeasurable," he added. "It is such a sensitive matter which touches life of all the people in this region. We got local government a year ago, yet our miseries remained the same," he added. He urged the government to take all possible measures now to avert floods and loss.

26 villages at high risk of flooding

NAWALPARASI, Aug 14: At least 26 village development committees (VDCs) in Nawalparasi are prone to high risk of flooding in... Read More...