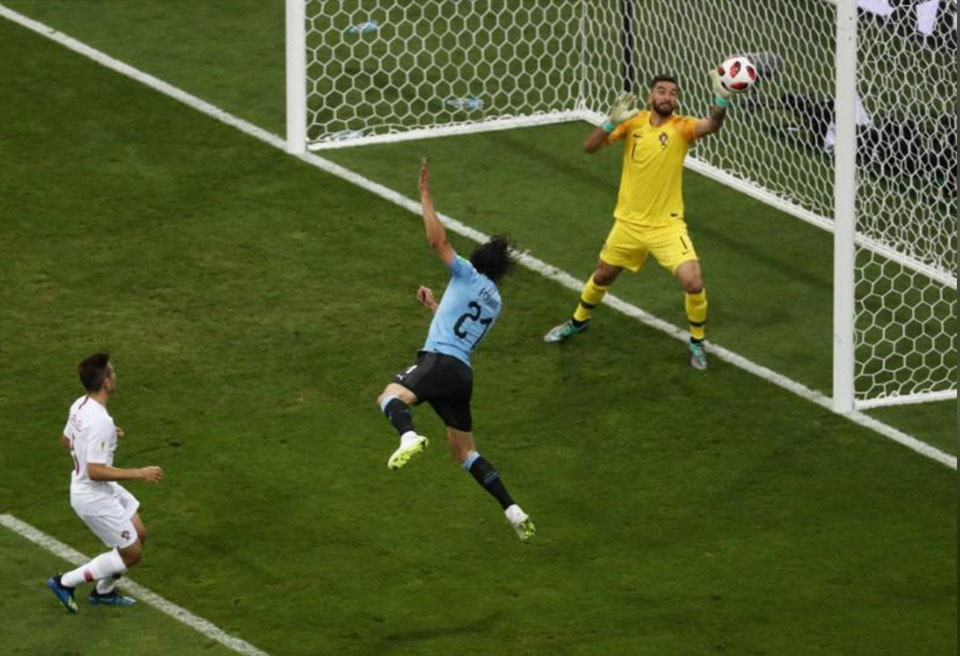 SOCHI, July 1: Uruguay forward Edinson Cavani scored a stunning brace to lead the South Americans to a 2-1 win over European champions Portugal in the World Cup round of 16 on Saturday and set up a quarter-final against France.

Cavani switched play with a long cross to Luis Suarez and continued his run to head home a pinpoint deep cross from the Barcelona forward and give Uruguay a seventh-minute lead.

Portugal defender Pepe made Uruguay pay for sitting back when he leapt unmarked to head in a cross from Raphael Guerreiro following a short corner to level the match at 1-1 in the 55th minute.

That was the first goal the twice World Cup champions had conceded in the tournament in Russia, but another moment of brilliance from Cavani put them back ahead seven minutes later at the packed Fisht Stadium overlooking the Black Sea.

The Paris St Germain forward curled in a first-time right-foot shot from Rodrigo Bentancur’s pass to beat Portugal goalkeeper Rui Patricio before limping off injured in the 74th minute as the Uruguay defence dug in to hold on to their lead.

“Happy for what happened today, I hope we can go further,” Cavani said. “It’s exciting... there are no words to describe this. Really, really, really happy - look at our fans! I want to continue dreaming.”

Uruguay will play France in the last eight in Nizhny Novgorod on Friday and will wait with bated breath on the injury to man of the match Cavani, who has scored three goals in the tournament.

“Cavani sustained an injury tonight and we will have to see how that evolves as it’s not clear at this stage how serious it is,” Uruguay’s long-serving coach Oscar Tabarez told reporters.

“But as always we will bank on the strength of our team as a collective. That is our best chance against any adversary, and we know that France will be very tough indeed.

“We’re here to play all seven matches, right up until the final, and we will see what happens.”

NOT ENOUGH BITE
Portugal, who won Euro 2016 in France, dominated possession but their attack did not have enough bite to break through the steely Uruguay defence twice.

They had 61 percent possession, played more than double the number of passes as Uruguay and had 20 attempts compared to six from their opponents.

“I think there is often a mistaken assumption that possession leads to scoring opportunities,” Tabarez said.

“We have to be strong in defence and we have great qualities and skills, especially in our defensive line. Even if you don’t have a lot of possession you can inflict pain on your opponent.”

Portugal captain Cristiano Ronaldo cut a frustrated figure during the entire match and could not add to his four goals in the first two matches, failing to improve his record of failing to score in all six World Cup knockout matches he has played.

The Real Madrid forward had an opportunity in the first half to score from a free kick about 30 metres out but could only hit the wall.

“In football, there are no moral victories and I would have preferred to play worse and win the match,” Portugal coach Fernando Santos said.

“But I do feel that the second half was very good from us in terms of desire and our determination to score. We tried our best and we played a good game.”

BORMES-LES-MIMOSAS, July 26: Authorities ordered the evacuation of 10,000 people as fires hopscotched around the Riviera for a third day... Read More...