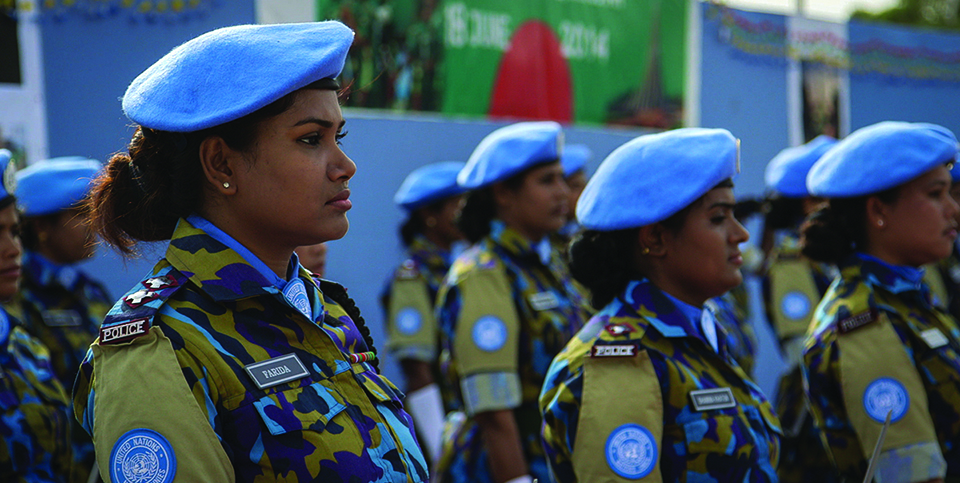 (The author is a section officer at the Ministry of Foreign Affairs, Nepal)
news@myrepublica.com

Amidst emerging global threats and complexities of modern era, humanity suffers the most and our responsibility to serve the humanity and respect the human rights becomes more pertinent. And particularly, the United Nations, the most trusted universal intergovernmental organization mandated to promote international peace and security, its role, responsibility and accountability to protect the most vulnerable civilians, especially women and children, becomes more crucial. To fulfill its aim of saving the succeeding generations from the scourge of wars and maintaining international peace and order, the United Nations deploys the blue helmets or the peacekeepers to the harsh and dangerous conflict zones and countries torn by conflicts to resolve conflicts therein, ensure lasting peace and boost sustainable development.

My head bows with awe and reverence toward the peacekeepers on the ground who selflessly sacrifice and devote their lives in the service of people hit hard by internal or intra-state or regional conflicts. Peacekeepers boldly face risks out of challenging mandates ranging from ‘ceasefire monitoring’ to ‘multidimensional and multifaceted operations’. For peacekeepers, protecting the civilians at danger, saving innocent vulnerable life and promoting human rights are of top priority while assisting the conflict-stricken states transit from conflict to stable peace. Bravery, discipline and dedication define peacekeeping.

The peacekeepers are committed to fulfill their mandates such as facilitate the political process, support local elections, protect civilians, assist in the disarmament, demobilization and reintegration of former combatants; and restore the rule of law through confidence-building measures, power-sharing arrangements and economic and social development. Above all, the peacekeeping missions must respect the principles of sovereign equality, political independence, territorial integrity of all states and non-intervention.

The selfless servitude to humanity by the peacekeepers has constituted peacekeeping into a flagship activity of the United Nations successful to achieve the Nobel Peace Prize. Over the past 70 years, more than one million men and women have served under this flagship in 71 UN peacekeeping operations. As of April 2018, 91,165 military, police and civilian personnel including about 86,812 men and 4,353 women from 125 countries serve in 14 peacekeeping operations.

Since 1958, Nepal has contributed about 120,000 peacekeepers in 42 peacekeeping missions. Currently 5,522 peacekeepers including over 180 women are serving in 14 missions, making Nepal the sixth largest troop/police contributing country. Nepal has always responded positively to the calls of the UN at a short notice and deployed troops and civilian personnel, without national caveats, even in most dangerous asymmetric threat environments. The world widely applauds the tremendous effort, courage and commitment of Nepali peacekeepers while discharging the duties and responsibility.

Unlike in the past when the peacekeepers were almost exclusively men, the number and importance of female peacekeepers is increasing these days. My respect for women peacekeepers doubles since on the one hand, they have successfully broken the stereotypical roles of women being confined within domestic walls while on the other, their presence fosters trust among local communities while dealing with sexual exploitation and abuse.

Although peacekeeping operations implement the Security Council resolutions on Women, Peace and Security including, women and children do suffer from abuse. In this scenario, the protectors themselves become perpetrators and their immunity turns into impunity. Therein, the involvement of women peacekeepers is essential to build confidence and instill the feeling of security among women and children. This ultimately contributes to gaining more access to useful information. Women tend to believe that only women can speak about women’s trauma and women-related issues with compassion and empathy and that only women can ensure the integration of gender perspective across all peacekeeping functions. In the same spirit, gender advisors work to make sure that the voices, needs and priorities of women and girls are incorporated in peace processes while promoting their political participation and ensuring their protection from sexual and gender-based violence. Sometimes female peacekeepers not only perform the same roles as men, but they also deliver results that their male counterparts cannot.

However, countering abuse should not be a substitute for improving gender balance and equality in peacekeeping operations. Troop/police-contributing countries themselves need to exercise accountability and prosecute sexual violence committed by their peacekeepers. Not only the number of female peacekeepers needs to be increased with robust pre-deployment and induction trainings, these countries must undertake necessary measures for the protection of vulnerable civilians.

Nepal is committed to the protection of civilians in armed-conflict, particularly women and children by supporting the Secretary-General’s zero tolerance policy on eradication of all forms of sexual exploitation and abuse and misconducts by the UN personnel. Nepal believes that every shameful act of peacekeepers must be prosecuted with utmost seriousness and in a case-by-case basis. Nepal has been deploying National Investigation Officers, including women, since March 2016 in each peacekeeping mission to reach the target of deploying 15 percent female peacekeepers. Within its capacity and resources, Nepal is committed to deploy an increasing number of skilled and trained female peacekeepers. Additionally, Birendra Peace Operations Training Centre (BPOTC) also plays an important role in training almost 6000 peacekeepers annually prior to their deployment.

Meanwhile, like the protection of civilians, safety and security of peace personnel should be dealt with utmost priority. While protecting the thousands of vulnerable citizens at the conflict zones enmeshed with grave risk, the peacekeepers face unprecedented challenges including the attacks from criminal or terrorist or extremist groups in hostile environments. Due to lack of sufficient and powerful equipment and instruments as well as quick response and monitoring mechanisms, the peacekeepers sacrifice their lives in the service of humanity. Since the first UN peacekeeping mission, over 3700 peace personnel have lost their lives including 76 Nepali peacekeepers. In 2017, the casualties of peacekeepers reached 132 from 37 countries.

To deal with this serious concern, last December, at the request of UN Secretary-General Antonio Guterres, General Alberto dos Santos Cruz, a former UN Force commander from Brazil wrote a report on improving security of peacekeepers. The Cruz report candidly recommends strengthening the posture, training and capabilities of peacekeeping missions to enable them to more effectively perform their mandates in support of political processes.

Peacekeepers must be fully trained, fully equipped and fully prepared to act amid the most imminent threats. The prominent partners including the Security Council, the General Assembly, the UN Secretariat, host states, financial contributors and regional organizations must renew their commitments for effective protection of civilians and peacekeepers alike.

All peacekeeping missions will succeed only when the peace personnel will be able to protect the civilians successfully. Peace can be lasting and sustainable leading to durable socio-economic development with win-win situation, only when the fully trained personnel will be deployed in fully equipped missions to save the life on the ground and to protect the rights of vulnerable, above and all, with the significant presence of female peacekeepers, both at professional and senior, decision-making positions.

KATHMANDU, March 16: The question papers of the examinations to select Nepali security personnel for deployment in the UN peacekeeping missions... Read More...

KATHMANDU, Dec 28: Minister for Foreign Affairs Prakash Sharan Mahat on Wednesday said that there are no plans of deploying... Read More...