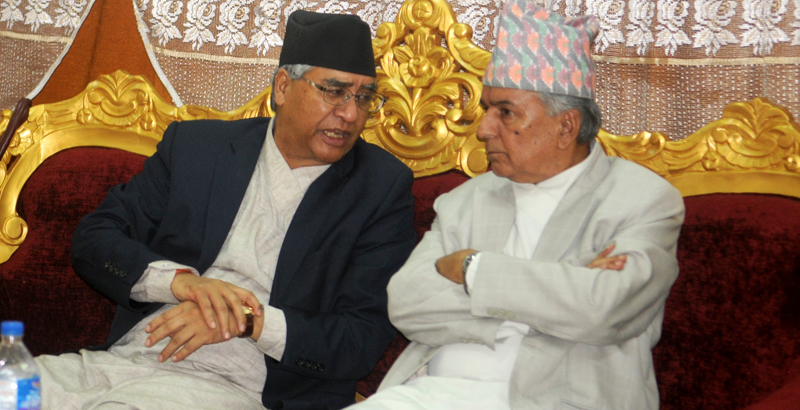 Selections likely today
KATHMANDU, Aug 25: Three weeks after the election of  Pushpa Kamal Dahal as prime minister, major ruling coalition partner Nepali Congress (NC) has yet to recommend names for its ministers in the cabinet.

An hours-long meeting of top NC leaders held at NC President Sher Bahadur Deuba's residence at Budhanilkantha failed to reach any understanding among them on the selection of ministers from the party.

They had earlier announced that they would pick the ministers from the party on Wednesday.

"We couldn't finalize the names at today's meeting as some of the leaders remained unsatisfied even after hours of discussions. So we will finalize the list tomorrow [Thursday]," NC leader Prakash Sharan Mahat told Republica late  Wednesday evening.

Deuba is most likely to finalize the selection on Thursday as he is scheduled to leave for Singapore on Friday for a health check up.

According to party leaders present at the discussions, NC President Deuba couldn't select the ministers as the rival faction led by Ram Chandra Paudel expressed  dissatisfaction over the number of ministerial positions alloted to the faction.

The party's leaders said Deuba is for selecting four ministers from the Paudel faction. This panel includes leaders from the Koirala family.

Earlier, the Paudel faction had decided not to join in the process of selecting ministers, to protest Deuba's 'unilateral working style'. "The party president asked us to furnish three names for new ministers from the Paudel panel as if he alone owns the NC. A meeting of our faction decided to seek the president's opinion over this matter," said NC leader Bal Bahadur KC of the Paudel panel.

Some leaders close to Deuba have pressed the party president to recommend ministers only from his camp. They accuse Paudel of not cooperating in the cabinet expansion.

NC lawmaker Sita Gurung said that they have suggested to Deuba to finalize the ministers by Thursday even if Paudel does not provide a list from his side.

"It has already been three weeks since the formation of the new government. Further delay in sending the new ministers from our side will irk ruling coalition partner Maoist Center," said Gurung.

According to sources close to Deuba,  possible leaders likely to be inducted in the Dahal government from NC include Balkrishna Khand as minister for defense, Prakash Saran Mahat as foreign minister and Arjun Narsingh KC as education minister. Also, Farmullah Mansoor, Jeevan Bahadur Shahi, Bhisma Raj Angdembe, Keshav Kumar Budhathoki, Mahendra Yadav and Ambika Basnet are likely to be inducted in the government. These are from the Deuba side.

KATHMANDU, Oct 13: As a part of his plan to reshuffle the cabinet and relieve the ministers representing CPN (Maoist Center)... Read More...

Paudel cross with Deuba over nominations