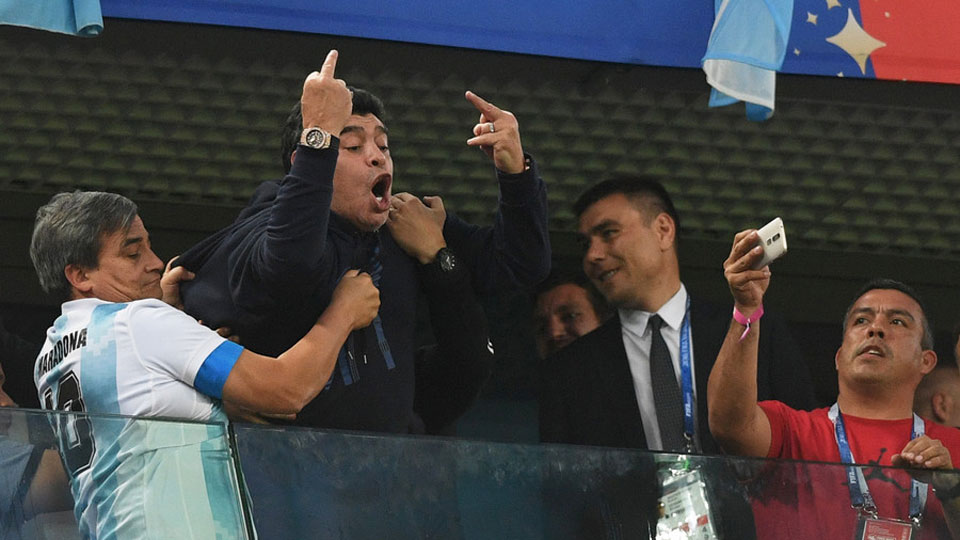 ROSTOV-ON-DON, June 27: Diego Maradona sensationally gave a double middle finger salute to the crowd after Marcos Rojo scored a dramatic late winner to send Argentina through to the knockout stages of the World Cup with a 2-1 win over Nigeria.

Maradona had already made headlines when he reacted as though possessed by an other-worldly force when Argentina captain Lionel Messi put La Albiceleste in front with his first goal of the tournament on 14 minutes, with a deft touch and then precise right foot finish.

In the second half, Nigeria found an equaliser when Javier Mascherano brought down Leon Balogun in the area. Spanish referee Antonio Mateu confronted VAR before pointing to the spot, to allow Victor moses to coolly slot home.

When Rojo side-footed home a winner with just four minutes of normal time remaining, Maradona's catalogue of emotions bubbled over, kissing his companion sat beside him before leaning over a partition to give those below a double middle-finger salute.

Predictably, social media went into meltdown at the 1986 World Cup winner's actions at St. Petersburg Stadium. Some likened it to Robbie Williams' actions during his performance at the opening ceremony.

The result meant that Argentina qualified from the tournament's 'group of death' in second place, setting up a last 16 fixture with France in Kazan, which will go some way to relieving some pressure on under-fire manager Jorge Sampaoli and many of the players - including Messi himself - after an abject start to the tournament.

SC puts off hearings in Karki case for last time

KATHMANDU, Dec 2: The Supreme Court could not conduct scheduled hearings on Thursday on a writ petition against the appointment of... Read More...

NC needs to be made free from factionalism: Prakash Man Singh
23 hours ago