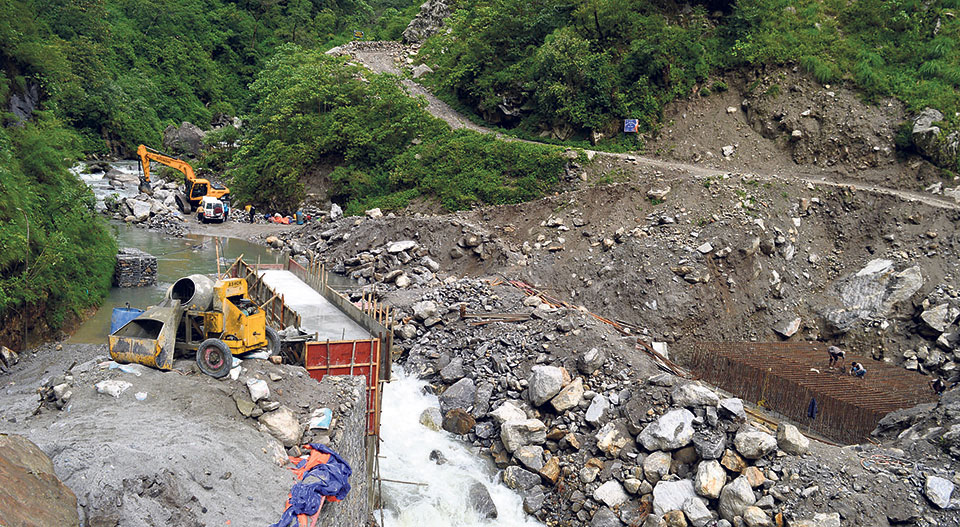 Construction of concrete bridge over Mardi River along the Beshisahar-Chame road section is underway in this recent photo. Photo: Kisan Sangeet Nepali/Republica

LAMJUNG, June 27: Construction of a concrete bridge over the Mardi River along the Beshisahar-Chame road section is being is being escalated to complete before the end of current fiscal year. Road Division Office (RDO) in Damauli confirmed the report.

“Almost 60 percent of the construction has been completed. Within a few days, blocks and pillars of the bridge will be in place,” said Bhanu Joshi, chief engineer at the RDO.

According to Rishi Koirala, field technician supervisor of the RDO, rest of the work is expected to complete by mid July.

The 24-meter long and nine meter wide bridge was supposed to complete few months ago. However, due to several reasons, it was delayed, Joshi informed. “It would have been completed a bit earlier. But a huge rock that was not accounted for earlier, delayed the project. It took time to blast it off,” he said.

He shared that the bridge, built at an estimated cost of Rs 15 million, might come into operation by August.

Construction of bridge over Mahakali river within five months

RSP meeting to continue today at 11 am
11 minutes ago