Nepal-China agrees to promote cooperation in all fields 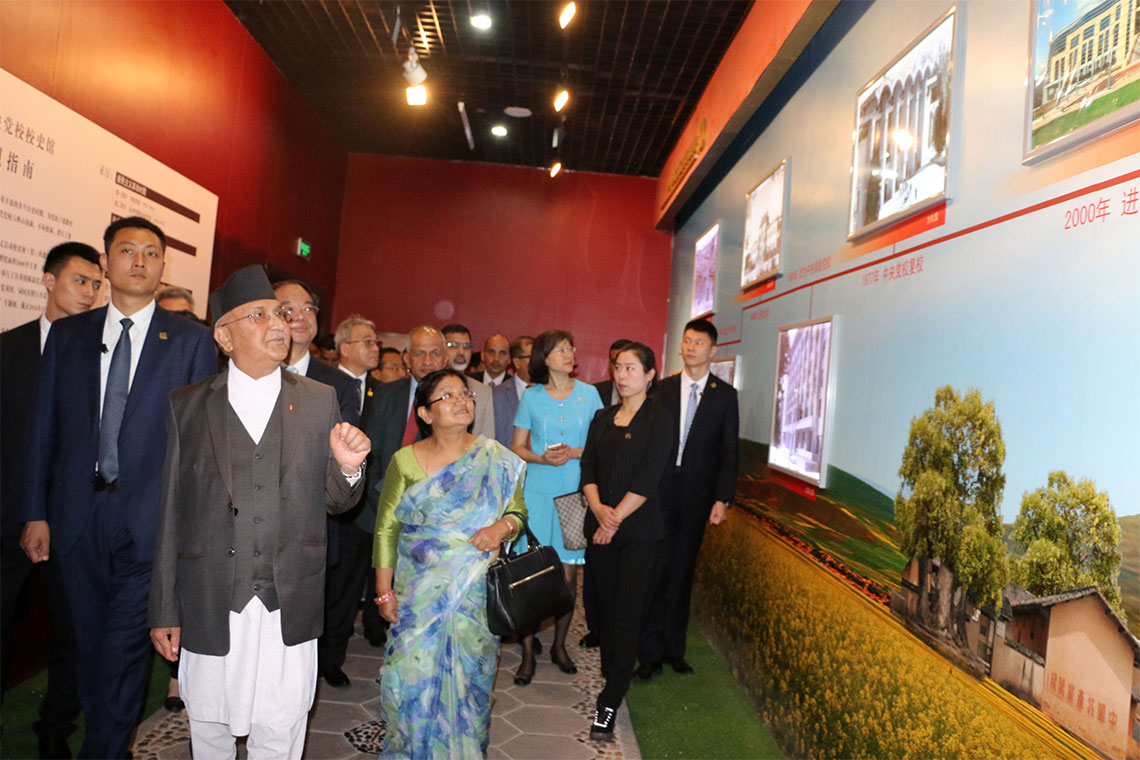 BEIJING, June 22 : Both Nepali and Chinese sides have agreed to intensify implementation of the Memorandum of Understanding on Cooperation under the Belt and Road Initiative to enhance connectivity.

The Nepali side conveyed its readiness to facilitate more Chinese investment in infrastructure building and in other productive sectors.

"Both Nepal and China expressed satisfaction over remarkable achievements made in various areas of cooperation since the establishment of diplomatic relations between the two countries in 1955, and believed that the bilateral relationship maintained the momentum of healthy development on the basis of the Five Principles of Peaceful Coexistence, which sets a model of harmonious coexistence between countries of different size and social system".

During the visit, Prime Minister Oli called on Xi Jinping, President of the People’s Republic of Chia, held official level talks with Premier Li Keqiang and met with Li Zhanshu, Chairman of the Standing Committee of the National People's Congress of China.

On the occasion, the Chinese side congratulated Nepal and her people on the historic and epoch-making political transformation and beginning of a new era of political stability and economic development.

It expressed happiness over the successful holding of elections to three tiers of the federal setup and the formation of governments at all three levels.

It also expressed confidence that the government under the leadership of Prime Minister K P Sharma Oli would be able to realize the goal of “Samriddha Nepal, Sukhi Nepali” (‘Prosperous Nepal, Happy Nepali’) and achieve political stability, social harmony and economic prosperity for the people of Nepal.

The Chinese side expressed its full commitment to assist Nepal in realizing its development goals within its capacity.

The two sides reiterated their firm commitment to respect each other's independence, sovereignty and territorial integrity, and respect and accommodate each other's concerns and interests.

The Nepali side reiterated its firm commitment to the one-China policy with Tibet and Taiwan affairs as being China’s internal affairs, and the determination on not allowing any anti-China activities on its soil. The Chinese side reiterated its firm support to Nepal's independent choice of its social system and development path, and the efforts made by Nepal in upholding its sovereignty, independence, territorial integrity, national unity and stability.

Both sides believed that high-level contacts are of special importance to the development of bilateral relations.

"The two sides agreed to maintain the momentum of high-level mutual visits, and to have meetings between the leaders on bilateral and multilateral occasions to share views on issues of common interest", the joint statement added.

The two sides agreed to make full use of existing mechanisms, including the Bilateral Consultation Mechanism and the Joint Economic and Trade Committee meeting, to expand exchanges and cooperation between government ministries, departments, legislatures and political parties at all levels.

To ensure the inter-connectivity and smooth running of the infrastructures above, the Nepali side will complete the disaster treatment around the Tatopani Port and along the Arniko Highway, maintain Kathmandu-Syaphrubesi Highway in operational condition.

Both sides expressed happiness over the signing of the MOU on Cooperation for Railway Connectivity. They underscored it as the most significant initiative in the history of bilateral cooperation and believed that it would herald a new era of cross-border connectivity between the two countries.

Both sides will coordinate closely to speed up the construction of the Pokhara International Airport so that it would start operation at an early date.

The two sides expressed satisfaction over the successful commercial operation of China-Nepal cross-border optical fiber cable and agreed to further strengthen cooperation on information and communications for mutual benefit.

Both sides expressed happiness over the conclusion of: Agreements on the Reconstruction of Friendship Bridge and Resuo (Rasuwa) Bridge; Protocol on the Utilization of Highways in Tibet Autonomous Region, China by Nepal for Cargo Transport; Memorandum of Understanding (MOU) on Investment and Cooperation on Production Capacity; the MOU on the Establishment of Mechanism for Facilitation on the Implementation of China-Nepal Cooperation Programs and Projects in Nepal between the two Foreign Ministries; MOU on Strengthening Cooperation between the two Foreign Ministries; MOU on Energy Cooperation; Agreement on Economic and Technical Cooperation; and MOU on Human Resource Development Cooperation. The two sides agreed to further deepen cooperation in economy, trade, investment, industrial capacity, post-disaster reconstruction and other mutually beneficial areas.

"Both sides agreed to study through different ways on the possibility of building oil storage facilities in the sites identified by Nepal", stated in the joint communiqué.
The two sides will continue cooperation in the reconstruction of heritages and schools and the Nepali side will positively study on how to fulfill such projects with localized method management.
The Nepali side expressed its willingness to speed up the development of the three North-South Economic Corridors in Nepal, namely Koshi Economic Corridor, Gandaki Economic Corridor and Karnali Economic Corridor in order to create jobs and improve local livelihood, and stimulate economic growth and development in those areas. Both sides agreed to further study on the possibility of cooperation on the above corridors.

The Chinese side agreed to take positive measures to facilitate Nepal’s export to China and consider providing technical and financial assistance for product development and post-harvest technology in agro-products.

The Chinese side will consider providing necessary technical support for the establishment of laboratory and quarantine facilities in Nepal in order to facilitate the export of Nepali agricultural products to China.

Both sides agreed to open additional trade routes between the two countries through mutual agreement and encourage financial transactions through banking channels.

Underlying the importance of generating a win-win situation for both countries, the two sides will constructively engage in finalizing the joint feasibility study on China-Nepal Free Trade Agreement (FTA). The two sides will strengthen cooperation both at central and local levels to promote establishing cross-border economic cooperation zones as per the MOU signed between the two countries.

The Nepali side will provide its full support and comprehensive cooperation to the construction of the two frontier inspection station projects. Both sides agreed to develop other dry ports at mutually agreed Nepal-China border points.

Both sides attached importance to the cooperation on transit transport in line with the Agreement on Transit Transport signed between the two countries in 2016. The competent authorities of the two sides will expedite negotiations on the Protocol for an early implementation of the Agreement.

The Chinese side would encourage local governments, Chinese enterprises and social groups to tap the potentials with the Nepali side on production capacity cooperation, building economic and trade cooperation zones and strengthening cooperation in areas that Nepal has resources and advantages, such as construction materials, water conservation and hydropower and organic agriculture and herbs.

In order to facilitate and promote trade, tourism and investment between the two countries, the Chinese side agreed to support the Chinese funded banks to open branches in Nepal in accordance with relevant policies and regulations.

In this context, the Nepali side agreed to provide necessary policy and regulatory support for such banks to enter into Nepali markets.

The Chinese government will continue to provide assistance to Nepal’s economic and social development within its capacity and wishes to see that grant assistance to Nepal and mutually agreed projects for post-disaster reconstruction will be delivered on time.

The Nepali side will provide full support and cooperation to the implementation of all China Aid projects as specified in the Exchange Letters.
Both sides agreed to study on the possibility to establish the Madan Bhandari Institute of Science and Technology. Both sides agreed to negotiate the financing modalities of the projects on road connectivity, railway connectivity, hydropower and transmission lines, among others, proposed by Nepal.

The two sides agreed to strengthen cooperation between the law enforcement agencies on information exchanges, capacity building and training. Both sides agreed to negotiate the Treaty on Mutual Legal Assistance in Criminal Matters and Treaty on Extradition, in order to strengthen cooperation on the administration of border areas and fight against illegal border crossing and transnational crimes. Both sides will increase exchange of visits of civilian and security personnel for training, disaster relief and mitigation as well as capacity building.

Both sides also agreed to enhance cooperation on border security and management, and negotiate the Agreement on Boundary Management System.

The Chinese side agreed to give serious study on the proposal of the Government of Nepal to establish a Consulate General in Chengdu. The two sides agreed to promote exchanges and cooperation in education, culture, tourism, media, think tanks, youth, and people-to-people relations. Both sides agreed to encourage the establishment of sister city relationship between different cities of the two countries.

The Chinese side agreed to encourage the Tibet Autonomous Region as well as Sichuan, Yunnan and Qinghai and other provinces to enhance cooperation in the areas of trade, tourism and investment, among others.

The Chinese side welcomed Nepal's participation in the China International Travel Mart (CITM) this year, and would continue to help arrange Chinese media and travel agency delegations to visit Nepal and encourage relevant Chinese agencies to further promote Nepal in China in view of upcoming Visit Nepal Year 2020.

The Chinese side agreed to continue providing Chinese language training in Nepal for Nepali tourism professionals to help promote Nepal’s tourism industry. The Chinese side also agreed to provide around 400 training opportunities in human resources development and more government scholarships every year to Nepal.

The Nepali side reaffirmed its full commitment as specified in the MOU in 2014 between the Ministry of Education of Nepal and the Chinese Embassy in Nepal, for facilitating the teaching program of volunteer Chinese language teachers in Nepal.

"The two sides agreed to strengthen cooperation in the United Nations and other multilateral forums and to safeguard common interests of developing, least developed and landlocked developing countries in particular", the joint statement adds.

The Chinese side attaches importance to the aspiration of Nepal’s obtaining the Observer Status in the Shanghai Cooperation Organization, and will consider it on the basis of consensus with other Member States.

The two sides expressed firm commitment to the rules-based multilateral trading regime under WTO and work for a more open, inclusive and balanced economic globalization with special preference to the LDCs and LLDCs so that its benefits are shared by all.

The two sides expressed their satisfaction over the outcomes of Prime Minister Oli’s visit, and agreed that the visit was of great importance in promoting the China-Nepal comprehensive cooperative partnership featuring ever-lasting friendship.

At the invitation of Premier Li Keqiang of the State Council of the People's Republic of China, K P Sharma Oli, Prime Minister of Nepal is on an official visit to China from June 19 to 24, 2018. Besides Beijing, Prime Minister Oli is set to visit Lhasa, the capital city of the Tibet Autonomous Region. RSS

KATHMANDU, August 25: Management Association of Nepal (MAN) and the PHD Chamber of Commerce and Industry (PHDCCI) of India have... Read More...