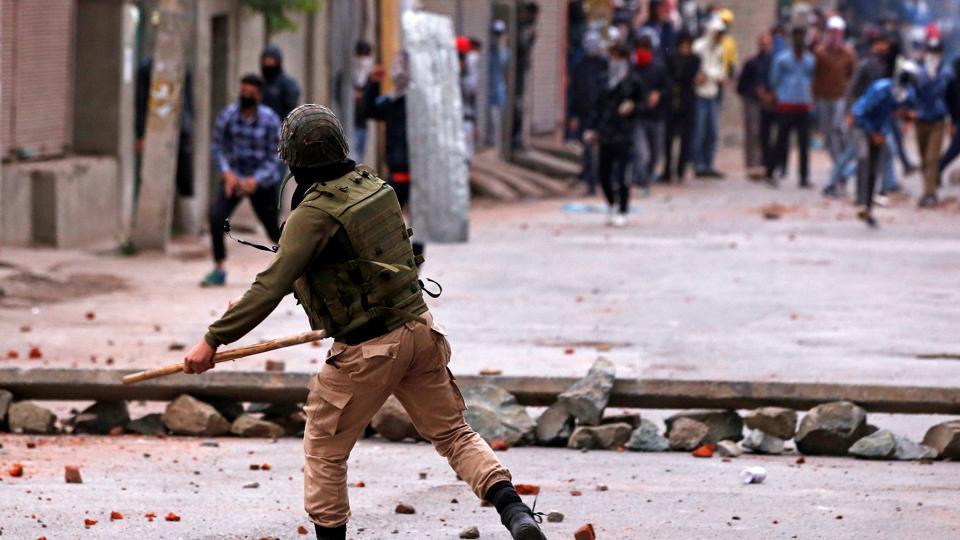 A first-of-its-kind UN report on alleged human rights abuses in Jammu and Kashmir provoked a strong reaction on Thursday from India, which described it as “fallacious, tendentious and motivated” and a violation of the country’s sovereignty and territorial integrity. In the Kashmir Valley, a separatist leader welcomed the report as did the Pakistan foreign office in Islamabad.

The report by the Office of the United Nations High Commissioner on Human Rights, titled ‘Report on the Situation of Human Rights in Kashmir: Developments in the Indian State of J-K from June 2016 to April 2018, and General Human Rights Concerns in Azad J-K and Gilgit-Baltistan’, sought an international enquiry into the alleged abuses.

“India rejects the report. It is fallacious, tendentious and motivated,” external affairs ministry spokesperson Raveesh Kumar said, questioning the intent behind the publication of such a report, which he described as a selective “compilation of largely unverified information.

“It is overtly prejudiced and seeks to build a false narrative,” he said, adding that it violated “India’s sovereignty and territorial integrity.”

The report also sought repealing of the Armed Forces (Jammu and Kashmir) Special Powers Act, 1990 “urgently” and also the immediate removal of “the requirement for prior central government permission to prosecute security forces personnel accused of human rights violations in civilian courts.”

Moderate separatist leader Mirwaiz Umar Farooq shared a link of the UN report summary. “Welcome the first ever UN report on HR violations in #Kashmir recognition of the grave HR violations by the state taking place in Kashmir for past 30 years in particular and calling for inquiry into them was long overdue. UN has a moral obligation towards the people of Kashmir,” the Mirwaiz wrote on Twitter.

“This report is historical & symbolically a huge step leading to an acknowledgement of Indian government’s role in massive human rights abuses. After UN resolutions on Kashmir, this report is an important addition,” Parvez wrote on Facebook.

Pakistan welcomed the UN High Commissioner’s proposal for a commission of inquiry on human rights violations in J&K, saying Islamabad had made several calls to this effect since 2016. The foreign office said in a statement that the report reaffirmed Pakistan’s allegations of killings, arbitrary arrests and systematic violations in the state.

Pakistan also backed the report’s call for a final political solution of the Kashmir issue through a meaningful dialogue that includes the Kashmiris. “The lasting solution of the Jammu and Kashmir dispute is an essential imperative for peace, security and stability of South Asia and beyond,” it said.

India maintains that the entire state of Jammu and Kashmir is an integral part of the country and Pakistan is in illegal occupation of a part of the state’s territory.

“Pakistan is in illegal and forcible occupation of a part of the Indian state through aggression. We have repeatedly called upon Pakistan to vacate the occupied territories. The incorrect description of Indian territory in the report is mischievous, misleading and unacceptable. There are no entities such as “Azad Jammu and Kashmir” and “Gilgit-Baltistan,” the spokesperson said.

The global human rights body also asked Pakistan to end its “misuse” of anti-terror legislation to persecute peaceful activists and quash dissent. The report said “any resolution to the political situation in Kashmir should entail a commitment to ending the cycles of violence and accountability for past and current human rights violations.”

“The people on both sides of the Line of Control have been detrimentally impacted and suffer from limitations or denial of a range of human rights,” said the UN report, which also referred to the July 2016 killing of Hizbul Mujahideen commander Burhan Wani by Indian forces which triggered unprecedented protests in the Valley.

The Indian statement said the report ignored cross-border terrorism which New Delhi said is the “most egregious violation of human rights.”

“Cross-border terror and incitement is aimed at suppressing the will of the people of Jammu and Kashmir, disrupting its political and social fabric and undermining India’s integrity”, the MEA spokesperson said.

He termed it “disturbing” that those behind this report have chosen to describe “internationally designated and UN-proscribed terrorist entities as “armed groups” and terrorists as “leaders”. “This undermines the UN led consensus on zero tolerance to terrorism, “ Kumar said.

The spokesperson said the report was “motivated” and deliberately ignored that “fundamental rights and freedoms guaranteed under the Constitution to every Indian citizen, including in the state of Jammu & Kashmir, are protected also by an independent judiciary, human rights commissions, free and vibrant media and an active civil society.”

“Our protest and views in the matter have been conveyed unequivocally to the Office of the High Commissioner for Human Rights. We are deeply concerned that individual prejudices are being allowed to undermine the credibility of a UN institution”, he said.

He said such reports cannot “undermine the will of the people and the Government of India to take all measures necessary to protect the sovereignty and territorial integrity of the country from cross border terrorism.”

The UN report cited documented evidence of militant groups committing a wide range of human rights abuses, including kidnappings and killings of civilians and sexual violence.

“Despite the Government of Pakistan’s assertions of denial of any support to these groups, experts believe that Pakistan’s military continues to support their operations across the Line of Control in Indian-Administered Kashmir,” the report said.

“The report overlooks the central reality in Jammu and Kashmir — that Indian forces are battling a terrorist movement aided and abetted by Pakistan,” strategic affairs expert Brahma Chellaney said. “Worse still, the report is based not on any on-the-spot investigation but on the basis of media and other accounts that have been picked up selectively to reach a predetermined conclusion. It reads more like the report of an activist NGO with an agenda than that of a UN organisation. India must do more than merely condemn the report. It should seek to shame and penalise those behind this misleading, one-sided report.”

An opportunity has come to punish those who dissolved parliament: Minister Chaudhary
23 minutes ago