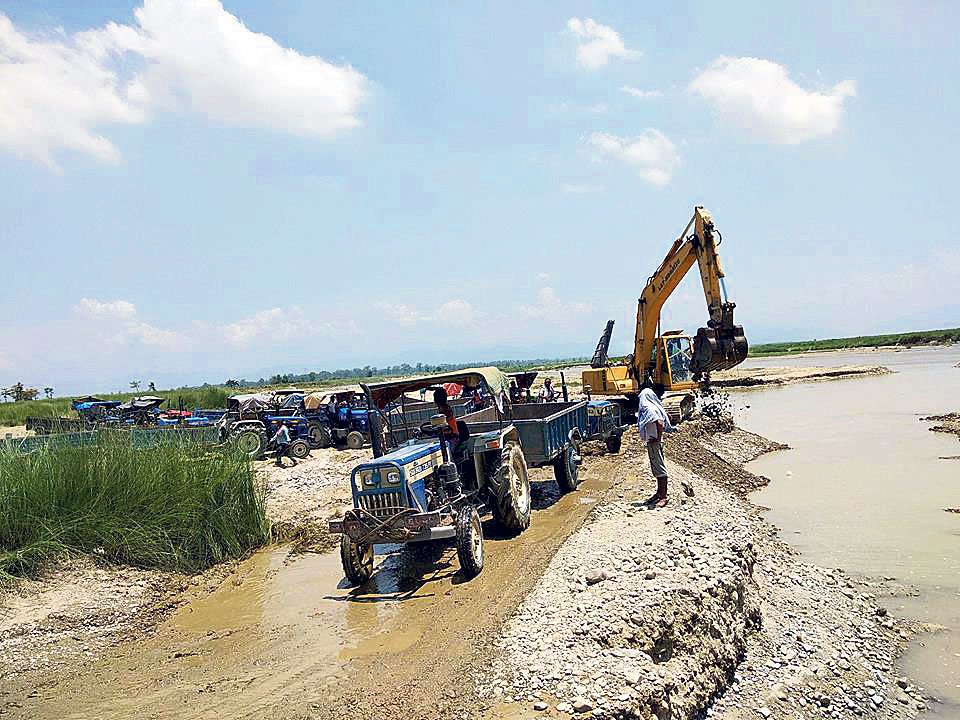 An excavator operated by Shiv Shankar Crusher loading tractors with sand and stones from a riverbank in Ramauli square of Brindaban Municipality, Rautahat in this recent picture. Photo: Madan Thakur/Republica

RAUTAHAT, June 11: Locals of Rautahat are alarmed with the weather forecast of the Meteorological Forecasting Division. The division has stated that monsoon this time would be more active than earlier years. People living near riverbanks have lost their peace of mind. In night, they hardly have sound sleep, as the fear of flood looms large.

“This has happened every year. Floods displace people. And in case of severe floods, it claims many lives as well,” said Rampukar Raya Yadav, local of Gadhimai area. “But this time, we are even more alarmed. According to media reports, people living near rivers like us are more vulnerable to floods this monsoon,” he added.

Hundreds of people who were displaced due to floods in the past are yet to return to their normal life yet. In lack of effective resettlement process, the flood victims continue to live miserable life.

“There are dozens of people in my village, who lost everything they had to flood in the past. Since then they have been struggling to build back their lives. It’s impossible for them to return back to normal life. Flood victims will always remain poor as the government does not support them,” Yadav lamented.

Although floods are not a new phenomenon in the Tarai belt, prevention measures are hardly taken to avert or minimize crisis.  In lack of such measures, hundreds of people are affected by floods every year. According to locals, even their lives are not harmed, flood and rain damage their crops every year.

“Flash flood and torrential rain are very dangerous. For farmers living near rivers or elsewhere, monsoon often brings loss. Uneven or torrential rain mostly destroy crops,” he elaborated.  For several years now, varying amount of rainfall and duration of monsoon has affected productivity of farmers in the Tarai region, Yadav claimed adding that such trend has raised a lot of concerns among the farmers.

“In our parents’ days, they could figure out to some extent that rains would fall within certain time period or in certain months. However, nowadays it has become very unpredictable. So is the case with floods. We have to be on our guard every hour. There have been times when the river swells overnight and inundates the entire village while you are sleeping,” he reported.

The sight of crusher plants operating unchecked in the riversides are a common scene in Rautahat. This has deepened fears of flooding among the locals that are living nearby rivers.

“Villagers understand that changing climate patterns, unpredictable rainfall is because of the deforestation and rampant mining of sand and stones from river beds. Crusher plans carry pebbles and sand from the river banks round the clock and we are concerned that it will change the course of the rivers and flood surrounding areas,” Yadav said. He added that many a times, locals have even tried to intervene, but were unsuccessful in restricting them.

In the name of road construction, the government has allowed construction companies to collect materials from rivers. But in lack of monitoring from the authorities concerned, crusher plants have been mining sand and stones unchecked.

“Crusher plants have to follow certain rules, provision while taking out sand and pebbles from rivers. But there isn’t any authority to ensure that they are abiding by those rules and regulations. The local administration is weak and so is the government,” noted Yadav.

Locals accuse that the excavators, which operate day and night are not doing so without ‘permission’ from the concerned officials. Due to reckless activities of crusher plants, Bagmati River has become ugly in the recent years, said Yadav.

“Staffs, officials of Gadhimai and Brindaban municipalities are working in collusion with the crusher plant mafias. They act as if they do not know anything and let mafias collect stones and sand as they please. This has damaged rivers and the surrounding environment,” Yadav stated.

Due to unregulated mining of sand and stones from rivers, rivers have changed their course which in turn has been a major factor in the flooding of settlements, Yadav argued.

“When stones and sand are extracted from the river banks in excess, path for the floods to enter out settlements is prepared. The crusher plant owners are not affected by floods so they don’t care. It’s poor people like us who are affected and therefore the government should intervene,” said Yadav.

“When the monitoring part is very weak, mafias boom. They share the profit among leaders, officials, and they carry on with their illegal works,” Yadav said adding that such unrestricted excavation is going unabated even in restricted Chure zones.

Following the reports of illegal mining of sand and stones from rivers, CDO of Rautahat, Govinda Prasad Rijal had directed local police force to take actions. However, this has not been followed so far, Yadav shared.

When will the undeclared Chinese blockade end?
15 hours ago