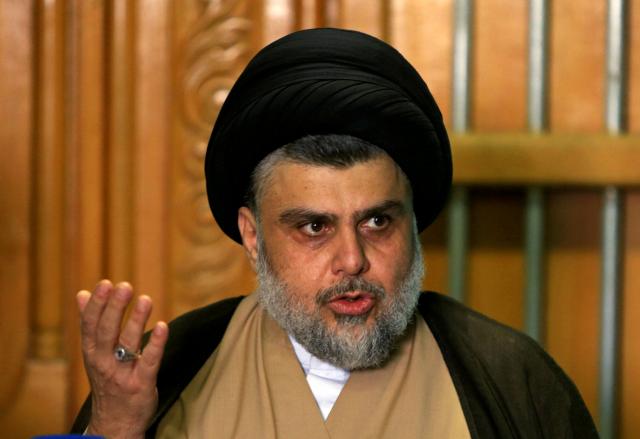 BAGHDAD June 9 : Iraqi cleric Moqtada al-Sadr called on Friday for a nationwide disarmament campaign and announced his Baghdad stronghold would be first to disarm just two days after an ammunitions cache exploded there and killed 18 people.

Sadr, whose political bloc won Iraq’s parliamentary election in May, called on all armed groups to hand in their weapons to the government and declared Baghdad’s Sadr City district would be a weapons-free area later this month.

“Everyone must obey the orders and not stand in the way of this initiative. Everyone should hand over their weapons without any discussion because the blood of Iraqis is more valuable to us than anything else,” he told his supporters in a statement.

The move appeared to be aimed at easing tensions between Sadr and the government.

At least 18 people were killed and over 90 wounded as a result of the detonation of an ammunitions cache in Sadr City just hours after parliament mandated a nationwide recount of votes for the May election, a measure rejected by Sadr’s bloc.

Sadr had urged his followers to remain calm after the explosion and ordered his office to investigate the incident.

Prime Minister Haider al-Abadi, whose bloc came in third, said storing ammunition in a residential area was a crime and ordered the Interior Ministry to investigate the incident and take legal action against those who had done so.

Some of Sadr’s political opponents had suggested the ammunitions cache belonged to his Saraya al-Salam (Peace Companies) militia.

The Interior Ministry released a statement on Friday thanking Sadr for his announcement.

Sadr, a nationalist who opposes the involvement of both the United States and Iran, scored a surprise victory in the May 12 vote by promising to fight corruption and improve services.

Parliament passed a law on Wednesday ordering a nationwide manual recount of votes in the election, after Abadi cited serious violations.

The move could undermine Sadr, who has in the past mobilized tens of thousands of followers to protest against government policies. One of his top aides expressed concerns that some parties were trying to sabotage the cleric’s victory.

Sadr has always been seen as a wildcard in Iraq’s turbulent politics, which is often driven by sectarian interests.

His militia, previously known as the Mehdi Army, staged two violent uprisings against U.S. occupation forces after the invasion. Iraqi and U.S. officials described him at the time as the biggest security threat in Iraq.

He stressed on Friday that the disarmament campaign should be directed at all armed groups and warned that his followers must not be its sole target.

“The Sadrist bloc must not be targeted using this initiative or else there will be negative consequences,” Sadr said.

“It must also be enacted upon official security forces that use weapons without permission or mercy; these forces are still young and need rehabilitation,” he said, referring to the mostly Iran-backed Shi’ite militias collectively known as Popular Mobilisation Forces (PMF).

Iraq’s military and police dislodged Islamic State militants who took over a third of the country with the help of both a U.S.-led coalition and the militias, many of which are linked to political groups.

Family of missing Dutchman announces a bounty of Rs 500,000 to find his whereabouts

BABIYACHAUR (Myagdi), June 29: The family of a Dutchman named Christian Wilson, who had gone missing from the Dhaulagiri base... Read More...