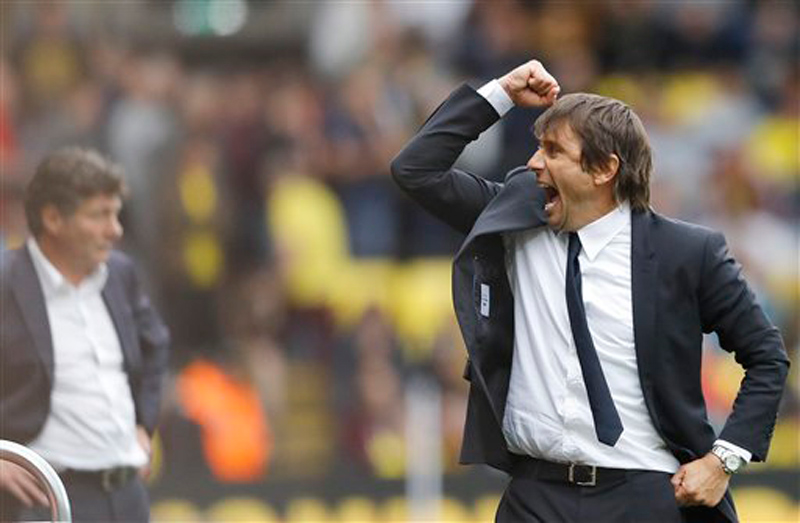 MANCHESTER, Aug 22: The established order is fighting back in these early days of the English Premier League season — and there are some familiar names atop the scoring charts, too.

Manchester City and Chelsea both won Saturday to join Manchester United in achieving back-to-back victories at the start of the new campaign.

Sergio Aguero scored two first-half goals — one from the penalty spot — to set City on its way to a 4-1 win at Stoke, continuing the team's impressive start to life under new coach Pep Guardiola.

Like Guardiola, Chelsea coach Antonio Conte also is in his first season in English football and has begun with consecutive 2-1 wins, the latest coming at Watford. Diego Costa scored an 87th-minute winner at Vicarage Road, five days after an 89th-minute clincher against West Ham.

City, United and Chelsea all failed to finish in the top three last season, capping an unpredictable campaign that saw 5,000-1 shot Leicester win the league in an upset for the ages. The chastened trio has spent a combined $500 million in the offseason to avoid a repeat and early results suggest it is unlikely to happen.

As for Leicester, the champions are still searching for the first win of their title defense after a 0-0 draw at home to Arsenal, in a game between the top two teams from last season. Both sides are on one point.

The only other team on maximum points from the opening two games is Hull, which comes as something of a surprise.

The northeast club has started the season with only 13 fit senior players, no permanent manager, no new signings and with owners looking to sell up. But Hull followed up the win over Leicester by beating Swansea 2-0 away on Saturday, through late goals by Shaun Maloney and Abel Hernandez.

Also Saturday, Liverpool lost 2-0 at promoted Burnley, puncturing the optimism generated from its win at Arsenal on the opening weekend. Everton came from behind to win 2-1 at West Bromwich Albion, and Tottenham beat Crystal Palace 1-0 thanks to a first goal for the club by new midfield signing Victor Wanyama.

Aguero has three league goals already this season, along with Man United's Zlatan Ibrahimovic, while Costa has also scored in his first two games. That trio is likely to be competing for the Golden Boot come the end of the season.

United has eased to its two wins under new coach Jose Mourinho, and City followed suit with only its second win at Stoke in nine attempts in the Premier League.

There's plenty of change at City this season but one constant remains — Aguero as a regular supply of goals. Counting the three he scored against Steaua Bucharest in a Champions League playoff match on Tuesday, the Argentina striker has six goals in three games so far.

He failed to score off two penalties against Steaua but stayed on spot-kick duty against Stoke and slotted away his effort in the 27th after Ryan Shawcross was punished for pulling back Nicolas Otamendi. Aguero's second was a header from Kevin De Bruyne's free kick.

Bojan Krkic also scored a penalty for Stoke, but Nolito made the game safe for City with tap-ins in the final minutes after coming on as a substitute.

Chelsea's win was harder to come by at Vicarage Road.

Watford looked on course for its first Premier League victory over Chelsea since 1999 when Etienne Capoue smashed a left-footed shot into the top corner in the 55th.

Watford goalkeeper Heurelho Gomes was partially at fault for Chelsea's equalizer in the 80th, failing to hold Eden Hazard's long-range shot and allowing Belgium striker Michy Batshuayi — one of Chelsea's two offseason signings — to score from the rebound.

Costa then ran onto a brilliant through-ball from Cesc Fabregas and shot past Gomes.

Victory of Mahindra Raya Yadav against Rajendra Mahato establishes politics as game of possibilities
14 hours ago
Why is Climate Finance a Focus Area for Nepal?
5 hours ago