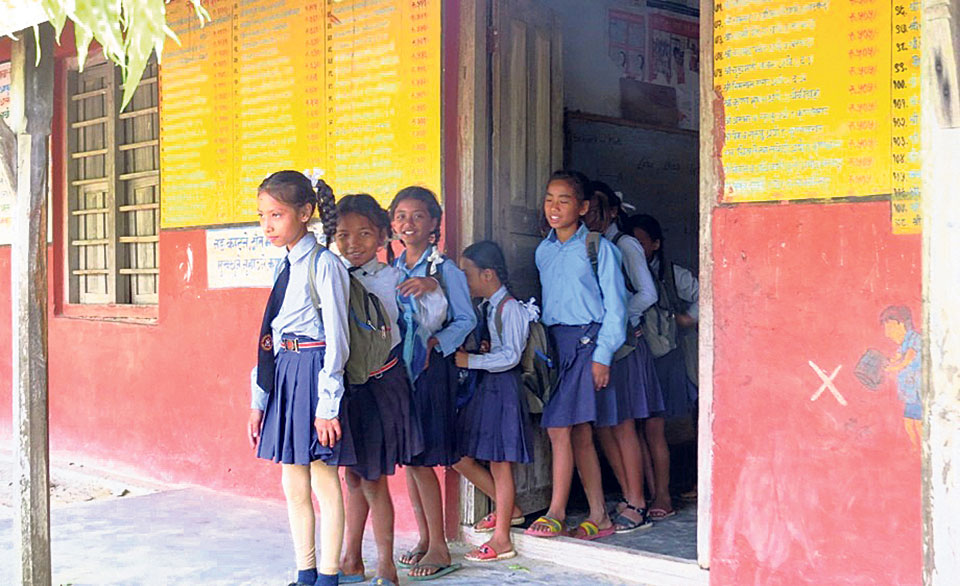 Students of a community school in Madi Municipality of Chitwan in this recent photo. Photo: Sabita Shrestha/Republica

CHITWAN, May 29: Disproportionate tea-cher-student ratio, lack of infrastructures and poor management committees are common problems of community schools in Madi. However, Madi Municipality is now set to change this. With an aim to ensure quality education in schools, the municipality office has decided to merge them.

“Two things are very important. Infrastructure and teachers,” said Mayor of the municipality Thakur Prasad Dhakal. “To ensure quality education you need to have good classrooms, all necessary stuffs to teach students, enough space to play and roam around. And there should be teachers proportionate to the number of students,” he added.

According to Dhakal, 11 out of 45 community schools are set to undergo merger. The decision to merge the schools was taken to ensure adequate quota of teachers in view of the number of students and also to provide better infrastructures.

“Our municipality is not in a position to bear the burden of all the existing community schools. If we want quality education, we have to merge them wisely,” he noted.

“The schools which are going to be merged are located within a distance of around two kilometers. The school management committees have already agreed for this process,” said Pravin Bhandari, information officer of Madi Municipality.

Bhandari added that there will be transportation facility to address the problems of students coming from far distance.

“Bus service is going to be provided for students coming from distance. When schools are merged, some children might really have problem,” Bhandari said. “The schools themselves had proposed bus service during a meeting. They are aware of inconvenience to the students. That’s indeed a practical problem and therefore there is no option to vehicle service,” he added.

Quality education is one of the major goals of the municipality, according to Dhakal. The office allocated Rs 12.5 million for the current fiscal year to improve education standard in the municipality. From the same budget, the office provided free counseling and tuition classes for students appearing for the SEE examination, Dhakal informed.

“We had allocated certain budget to improve the quality of education. Students of SEE examination were provided with tuition and counseling classes for free,” Dhakal said.

The classes were joined by students of six secondary schools. The municipality office informed that Rs 1.3 million was invested for the purpose. And rest of the budget is being invested for infrastructural development of schools, the office informed.

Dhakal stated that five of the primary schools in Madi are going to be shaped as model schools. Investment in those schools is going to be significant, he said.

“Our focus is on primary schools. And then one from among the secondary schools is going to be developed as a model school. Slowly, others will follow the change,” he shared the plan.

“Some schools are purely vocational but most of the schools do not have such classes. But now, we are going to prioritize such practical learning,” Neupane said. “There are schools also for differently-abled students. The municipality is aware of the special need of such children, too,” he added.

There is only one school for different-abled or mentally challenged children in the municipality. Similarly, the municipality boasts of three community learning centers, one college that offers Bachelor level classes and one plus two college.