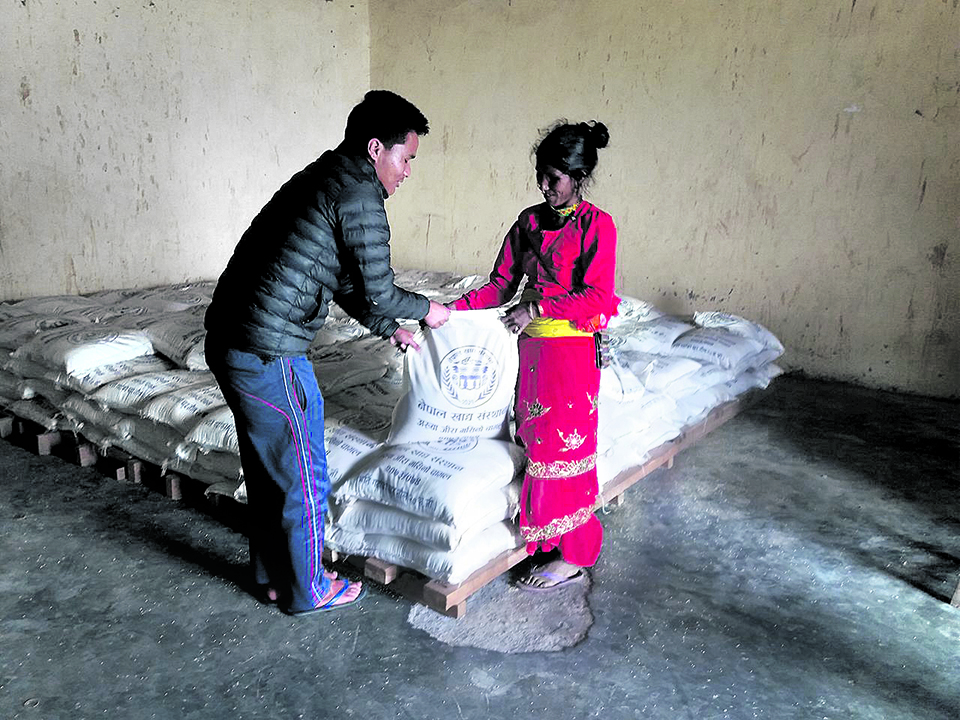 KALIKOT, May 28: Dozens of villages in Kalikot district have been hit by food crisis. Scarcity of rice has bothered the locals a lot. However, this food crisis is purely an “artificial crisis” created by the authorities.

According to contractors who are responsible for transportation food to the villages, the crisis is due to the “commission game” and government officials are to blame for it.
“I am not able to transport rice to my depot as the government officials are asking for commission,” said Kamal Gurung, a contractor for Thripu Depot. “I am not ready to give commission. But he insists on getting commission. So we are stuck in this uneasy situation,” he added.

Food crisis is not a new thing in Patala and other villages of Kalikot. Despite government plans and policies to ensure food security in this region, such crisis has time and again surfaced here. Even this time, it is going to get severe, locals lament.

According to Gurung, the chief of Surkhet District Division of Nepal Food Corporation Bhim Bahadur Thapa has denied giving permission to transport food without first getting his portion of commission. “The chief wants commission. We are not giving it. So, rice has not been transported,” he reiterated.

Not transporting food stuffs to Thirpu Depot on time means that many villages of the district will face food crisis. However, the matter is not going to be settled unless the officials are given commission, says Gurung.
Gurung, however, did not reveal how much commission the chief had asked for. He only said the ‘culprit’ is the chief. “The problem has been prolonging due to their attitude,” he stated.

Thapa he did not receive calls when Republica tried several times to get his version regarding the accusation.

Meanwhile, Surendra Bista, chief of the central office of Nepal Food Corporation, Thapathali, admitted that ‘some wrongdoings in Surkhet have been noticed’.
“We have heard that something wrong is happening there. Or else, food grains should have been transported to the depot without any hassle,” Bista said. “This matter must be investigated,” he added.

The office informed that there are a total of 27 depots in Karnali region and the overall demand of food for this fiscal year is 92,000 quintals.
According to Laxman Bam, chairperson of Patala Rural Municipality, there is severe food crisis in the municipality. Even after demanding food from the center, it has not been supplied, he complained.

“We are unaware why they are doing this. We had sent a letter regarding this. If food does not come here on time, we are going to starve,” he lamented.
Rural municipalities and municipalities estimate the needed quantity of food and inform it to the central office of the food corporation. After the center certifies it, food distribution committee takes the responsibility of its transportation to the destinations.
“We have not been able to contact the officials responsible for this. We are wondering why it has been delayed,” Bam said. He added that it is the responsibility of the food corporation office to monitor food distribution and ensure that it reaches the destinations on time.

Scarcity in village, excess in headquarters

Even though the rural areas are hard hit by rice crisis, the same is not the case in the district headquarters Manma. According to a local of Manma, Sundar Budha, there is no scarcity of rice in the headquarters.

“Rice is in abundance here. There is no problem. The problem is only in the villages,” Budha said. “Problems are always in rural areas. Nobody cares about the people there,” he added.
In the headquarters, there are stocks of 632 quintals of rice, according to officials at the office of the food corporation in Manma.

Budha said that food crisis in villages will force the people to come to the headquarters to get it and that becomes very costly for them. “When they do not get to buy rice there in their village, they come over here. It takes many days and they have to spend much time, energy and money for it. And due to lack of proper transportation service, it is not possible to take home huge quantity of rice either,” he elaborated about the hassles of the villages.

Budha added that the problem of food crisis is not going to be solved until and unless there are better roads.

“The problem of the people of Karnali is the lack of roads. Until and unless transportation service is there, people will continue to suffer. The government does not care,” he said.

BAJHANG, SEPT 17: As many as 18 VDCs adjoining Chainpur, the district headquarters, are suffering from scarcity of food items while... Read More...

JAJARKOT, Oct 5: The festive mood in Jajarkot district has been dampened as the rice depot in the district has run... Read More...

Can kids be harmed wearing masks to protect against COVID?
9 hours ago

Ethics of Accounting Profession
11 hours ago