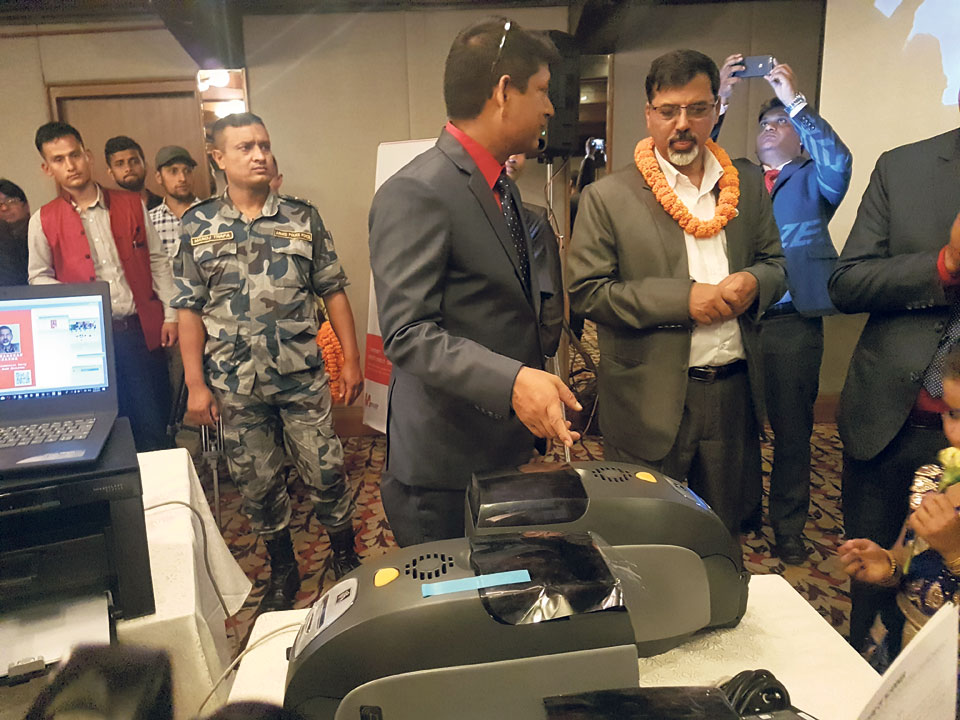 KATHMANDU, May 26: There is a piece of good news for over a million who have passed the driving license test and are waiting to get their smart driving license for over nine months. Malika Incorporate Pvt Ltd, a Nepali company, has launched smart card printing machines in Nepal, along with its international partner Zebra Technologies.

At an event organized by the company, former Minister of Home Affairs and leader of the Nepal Communist Party, Janardan Sharma launched the new printers that are capable of printing smart license and other types of identification cards or Automated Teller Machine (ATM) cards.

Speaking on the occasion, the company's president Tika Ram Joshi stated that if distributed to all fourteen branches of the Department of Transport Management, the 1.1 million driving license that test takers are yet to receive can easily be printed within three months in Nepal itself.

“We will be able to manufacture up to 10,000 cards daily and it will take up to three months to print all the driving licenses, for which so many people are waiting,” He said. “With the machine, other types of cards such as national ID cards, student ID cards and also ATM cards can be printed instantly. This will be especially convenient for those costumers of banks who had to wait for days and even months before they received a debit or credit card.” Joshi further stated that utilizing this technology, bank customers can get a new ATM card in just a click of a button -- instantly.

Atul Mishra from Zebra Technology stated that the machine can also produce student identity cards equipped with digital signatures such as QR codes or barcodes which can give access to important information to parents about their children including academic performance, homework, and attendance.

Mishra added, “These cards can be used in hospitals as well giving all the information about the patient's health and conditions along with test reports. This is an effort to make hospitals more paper free and digital.”

Speaking on the launching event, former minister Sharma stated that such technology as the card printers will play an important role to establish a digital society.

“I believe that the scope of these smart cards in such a different sectors of the country including banking, transportation, health and education is phenomenal and moreover I also believe that one more field that these cards could be used for is agriculture. I believe we can use the card to look into the production, distribution and monitoring of agricultural products,” said Sharma.

He further stated that he was told to wait for several days before receiving an ATM card when he started a bank account. And expressed his happiness that technology to curb this problem has arrived in Nepal so that bank users can receive these cards without delay.

According to an official of Malika Incorporate, the printer of Zebra Technology costs around Rs 150,000 and the production cost of each card is Rs 35. According to the official, the same printers are being used to print Adhar Cards and driving license in India as well.