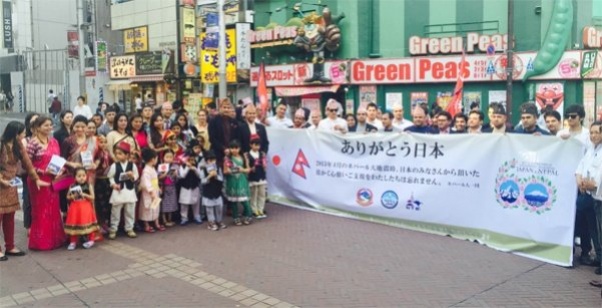 TOKYO, May 30: Nepalis in Japan thanked the Japanese government and Japanese who extended support to Nepal in the aftermath of the last year’s devastating earthquake.

They took out rallies from different places and extended invitations to Japanese for Nepal visit.

At the functions jointly organized by Nepali Embassy in Japan, Nepal Tourism Board and Non-resident Nepali Association, Japan Chapter some 30,000 invitational postcards were distributed.

The postcard has photo of Mount Manalsu and other photos that depict Nepali’s religious, cultural and social identities.

At the event, a Japanese man remarked that he turned emotional the way Nepalis thanked for the support.

Speaking at the function, Acting Nepali Ambassador to Japan, Gehendra Rajbhandari thanked the Japanese government and Japanese for the support during difficult times.

Kathmandu, April 5: Vice President of the Bundestag, the parliament of the Federal Republic of Germany, Claudia Roth, is scheduled... Read More...