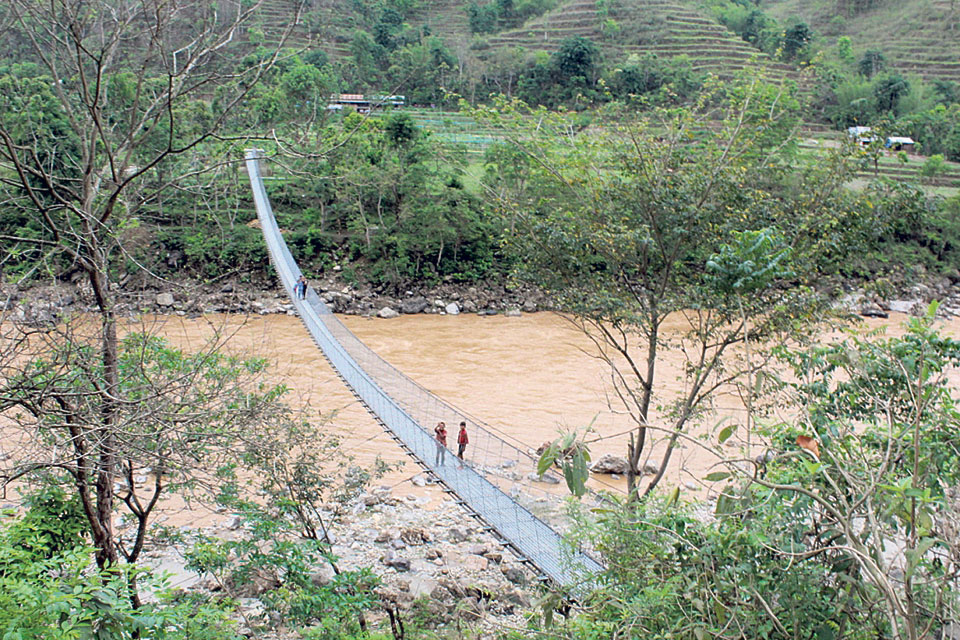 Sarita Shrestha/Republica Newly constructed suspension bridge over the Trishuli River near Benighat and Siddhalek villages in Dhading in this recent picture.

DHADING, May 21: Roaring Trishuli River has sent shivers down his spine several times while crossing the river. Many a times, he even had nightmares in which he trips off the tuin (a makeshift cable crossing) and drowns in the river. Despite such fears, there was no option other than to use the tuin to cross the river for Ram Sharan Sedhai and his fellow villagers of the Siddhalek village.

“I used to be scared to cross the river by using the tuin since my childhood days. I would become even more fearful after hearing about accidents on the tuin,” said Sedhai. “But now, we are very much relieved. It’s a matter of great happiness,” he added.

The reason behind Sedhai’s newfound joy is the newly built suspension bridge over the river making tuin a matter of past. With this, the fear to lose life during every trip over the river has vanished too.
“Many people have died while trying to cross the river. The rope used in the tuin was very fragile and was kept together through many knots. No one paid attention to replacing the rope. We all were using the same decaying tuin for years,” shared Sedhai. “The bridge has given us a different feel. We are so safe,” he added.

Reflecting back, he shared that the tuin had not only scared him to the core but had affected his studies. He dropped out of school to avoid to crossing tuin every day for going to school.

“I am literate but could not continue my studies as we didn’t have a high school in our village. To reach the high school in other village, we had to cross the river using tuin. Out of fear of tuin, in instead dropped out of school,” he reminisced.

When the tuin was constructed over the river near the border of Benighat-Salang village in 1978, it had brought immense happiness to people’s life. Through it, they could connect to the outer world.
“In the last four decades, many things changed in this country, but our tuin remained the same. Our life remained equally risky. We reached to the local administration during this time several times to complain about it, but our grievances always fell in deaf ear. We have lost some of our near and dear ones to the unsafe journey,” he lamented.

“During his visit two years ago, Prime Minister Oli had promised to replace all tuins with bridges within a year. Though it took around two and half years, we can see that he is delivering the promise. Tuins have almost disappeared from Dhading,” noted Sedhai.

In Chauradi, people are still dependent on the same old tuin. They carry goods and vegetable on their back and cross the river over the tuin. Apart from the risk, tuins are also inconvenient for transporting goods across the river. Farmers complain that lack of transportation facilities has been severely affecting their productivity.

“We are now living a different life. But for the residents of Chauradi, it’s still the same. During medical emergency, it is very much problematic to take the patient to hospital by using the tuin,” Sedhai said while sharing that he too was carried in basket on a villager’s back who crossed the river through tuin.

According to Kushal Ale Magar of Kumpurtar village, farmers in his locality have started reap benefits of the new suspension bridge. A farmer himself, Ale has several times lost his vegetables to the river while carrying them to the market using tuin.

“Every time, it was like risking your life. If you come alive, you had to consider yourself lucky. Yet we used to take vegetables to market. Many times my vegetables have fallen into the river, incurring huge loss to my family,” Magar reported. “The bridge has relieved us of such concerns. Now we can carry out farm produce to the market safely,” he added.

Vegetable and milk products produced in Kampurtar village are sold in the nearby Gajuri market these days. Farmers have felt that the new suspension bridge has brought prosperity to their village.

“There is no count of how much of our cargo we have lost to the tuin. It is not just me whose things have fallen into the river while crossing the river using tuin. Almost everyone would tell you the same story. Now people are so happy,” he summed up.

Even elected representatives use 'tuin' to cross Karnali River

HUMLA, April 6: Although KP Sharma Oli, during his first stint as prime minister in 2015, announced that the 'tuin'... Read More...

KATHMANDU, Sept 28: The World Bank on Wednesday approved US$ 133 million credit to Nepal to help the country build... Read More...

Here's who could replace Wenger in Arsenal

The Arsenal board drew up a five-strong shortlist to send to Stan Kroenke in the event of Arsene Wenger’s departure,... Read More...