A road is changing life of Jumla residents 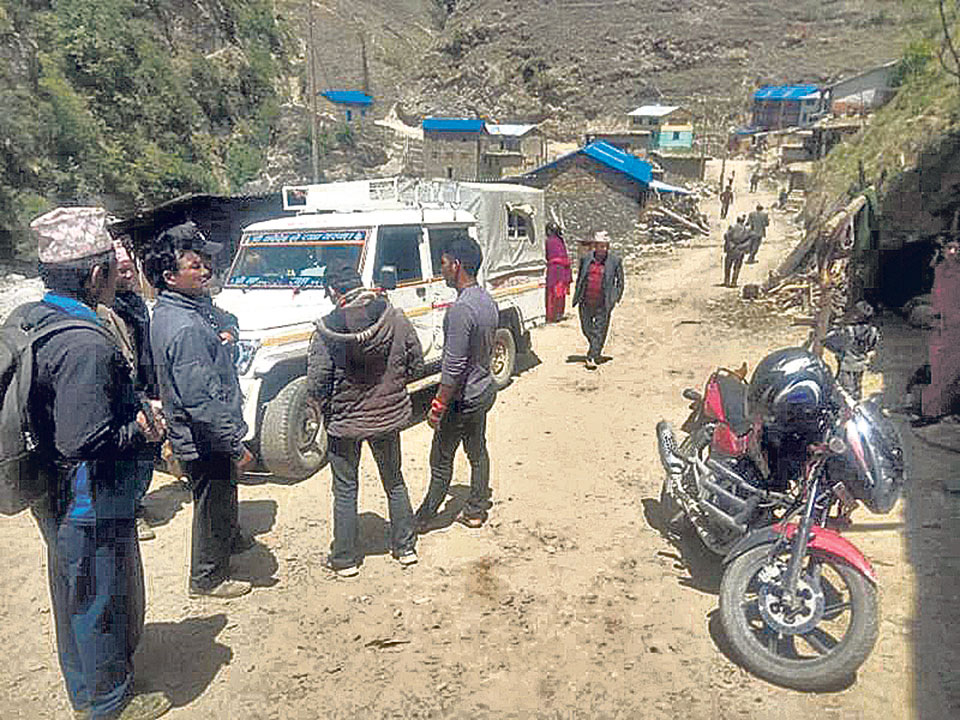 Db Budha/Republica A vehicle passes through a local market along the Kudari - Tamdi road at Kayarkot in this recent photo.

JUMLA, May 20: Dhanbahadur Rawat, 64, long wished of seeing vehicles in his village. A resident of Tatapani Rural Municipality- 7 however never ever believed that such a wish would come true one day. Two years ago, villagers told him that a road was under construction and that it will pass from near his patio. He recalls telling them ‘they have gone mad’. Now he is awestruck. All big and small size vehicles pass through the road that indeed has touched his patio.

“I cannot believe my eyes. It has been quite some time since the road has come into operation and vehicles started plying. Yet, sometimes I ask myself, whether it is real,” Budha shared while expressing excitement over the development. He said that he used to feel that it would take decades for a remote place like his to develop or to have a nice road. “I never ever imagined that this would happen in my lifetime at least,” he added.

The new Kudari-Tamdi road touches Jajarkot district. Just like Budha, locals are overjoyed with the road. “This has brought prosperity to us. Life has become far easier,” Budha stated.

The construction of the new road has increased access to markets for farmers of Tatapani and surrounding villages. Because of the connectivity, they have been able to get better returns on their produce.

“Earlier our produce would rot if we did not get buyers on time. Despite working hard, we were not able to get good price of our produce. With improved access to market, we are now able to earn by selling almost anything we produce,” Budha reported.

He has increased the numbers of cattle including sheep and goats. He shared that compared to past, nowadays he gets better prices of the livestock. Along with that road has increased their access to health facilities for themselves and their livestock.

“Earlier, we had to give up hopes if our cattle were ill. Even humans had to compromise if we could not afford air lifting patients to better hospitals,” Budha narrated. “Now things have completely changed due to just one road,” he added.

Locals are happy about the road also because house construction materials like rod, bricks, sand and aggregates are now transported right at their doorstep. This has let them construct necessary infrastructures.

“Constructing houses with such materials has been a far - fetched dream for many of us in the past. Only very rich people would somehow manage to have proper house. Now you can get such materials in cheap rates and the moment you need them,” Budha informed.

Owing to the road, several local markets have opened up along the road. According to a local of Kudari village, Deepak Rawat, people’s movement and monetary transactions have increased dramatically of late.

“Our biggest problem was the lack of access to health centers. It was very difficult and too much costly. Now that problem is no more there. Now we have new health centers, new markets and other crucial services,” Rawat said. “Road is indeed a door to all kinds of development,” he added.
Locals in this part of the district had to pay unreasonable price for even necessities like salt, sugar, oil or rice. “It would take over a week for us to transport those things to our home. Life was just miserable,” Rawat reminisced.

People of Kudari, Tamdi, Tatapani and other villages used sheep to carry goods. Many a times, Rawat has seen sheep falling off the cliff while carrying loads. “Even humans have died by falling off the cliffs with their loads. This road has come as a boon to us,” he said.

Apple, beans, herbs and potato, among other productions have grown in Jumla according to Rawat. Traders come at doorstep offering good price to farmers, he said.

“Earlier, reaching market was a matter of days or weeks. Now it takes just an hour,” Rawat stated. “This has changed all our routine, lifestyle,” he added.

New local markets at Kayarkot, Paatarsaghu, Nuwakot, Daarim and Topla, among other areas, have added to the burgeoning economy. At least a dozen of good carrier ply through the road, Rawat informed.

“Tractor, jeep, bus has different transportation rates. But that’s not expensive,” he said. “We are getting pretty good price for our apple and other productions,” he added.

Along with the Kudari-Tamdi road, several smaller roads connect remote settlements of the districts. With new buildings and infrastructures, villages are now fast becoming
prosperous.

Differences grew between the couple after engagement
12 hours ago

Construction of transmission line connecting China in limbo
5 hours ago

Statue of Bhrikuti unveiled at Bhrikuti Fun Park
4 hours ago