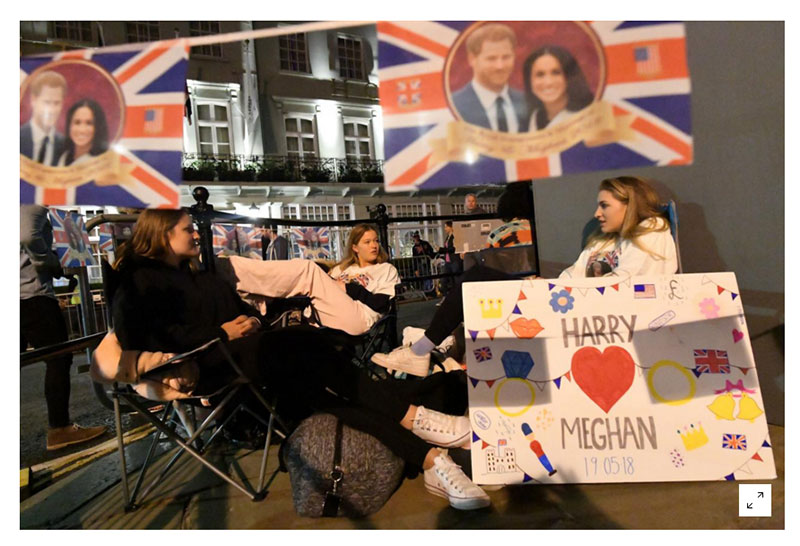 Fans of the royal family camp outside Windsor Castle prior to the wedding of Prince Harry and Meghan Markle in Windsor, Britain May 18, 2018. (REUTERS)

WINDSOR, England, May 19: Prince Harry weds U.S. actress Meghan Markle on Saturday in a lavish ceremony that unites the pomp of British royalty with Hollywood glamour.

Hundreds of millions of people across the world are expected to tune into watch the wedding of Queen Elizabeth’s popular grandson and the American star of the TV drama “Suits” at the 15th Century St George’s Chapel in Windsor Castle.

More than 100,000 fans will cram the narrow streets of the town 20 miles (30 km) west of London, dominated by the oldest and largest inhabited castle in the world, a home to 39 English monarchs since 1066.

“I love all the regalia, all the hoo-hahs, the procession with the cavalry,” said Jane Tofolo, 50, from southwest London, who shook hands with Harry when he held an impromptu walkabout with his brother and best man outside the castle on Friday evening.

“It will be spectacular because us Brits do all that very well.”

Harry, 33, is sixth in line to the British throne. Markle, 36, is a divorcee whose mother is African-American and father is white.

For many, the wedding is a fairytale. For some black Britons, it illustrates the breakdown of barriers in modern Britain.

To others, it is an irrelevance. Polls have suggested that most Britons will not bother tuning in to watch the event.

The bride will arrive at the church with her mother, Doria Ragland, 61, with whom she was spending Friday night at a luxury hotel. Harry was staying at another hotel with elder brother and best man Prince William, whose daughter Charlotte and son George will be among the bridesmaids and page boys.

Harry’s father and heir-to-the-throne Prince Charles will walk his future daughter-in-law down the aisle after Markle’s father pulled out due to ill health.

Thomas Markle, 73, a lighting director for TV soaps and sitcoms, told the U.S. celebrity website TMZ he had undergone heart surgery on Wednesday. Confusion over his attendance marred the build-up to the wedding, which had been carefully choreographed for months by royal aides.

On Friday, Ragland met the 92-year-old monarch and her husband Prince Philip, 96, who will be among the senior royals in the 600-strong congregation. It will also include a smattering of celebrities, including fellow cast members of Markle from “Suits”.

The service will be conducted by the Dean of Windsor with Justin Welby, the Archbishop of Canterbury and the spiritual head of the Anglican Church, overseeing the exchange of vows. A black U.S. bishop, Most Reverend Michael Bruce Curry, will give the wedding address.

Educated at the exclusive Eton College, a stone’s throw from Windsor, Harry, the younger son of the late Princess Diana, gained a reputation as a royal wild child.

He admitted smoking cannabis, getting drunk when underage in a pub, scuffled with paparazzi outside a London nightclub and drew outrage by dressing as a Nazi officer at a party.

Harry issued a public rebuke to journalists when they were dating, accusing some of sexism and racism. The prince has long had a testy relationship with the media. His mother’s limousine was being chased by paparazzi just before her fatal crash.

WINDSOR, May 19: Thousands of fans gathered in the English town of Windsor for the lavish royal wedding of Prince... Read More...

LONDON, Sept 7: US actress Meghan Markle, the girlfriend of Britain’s Prince Harry, has said they are in love and happy... Read More...