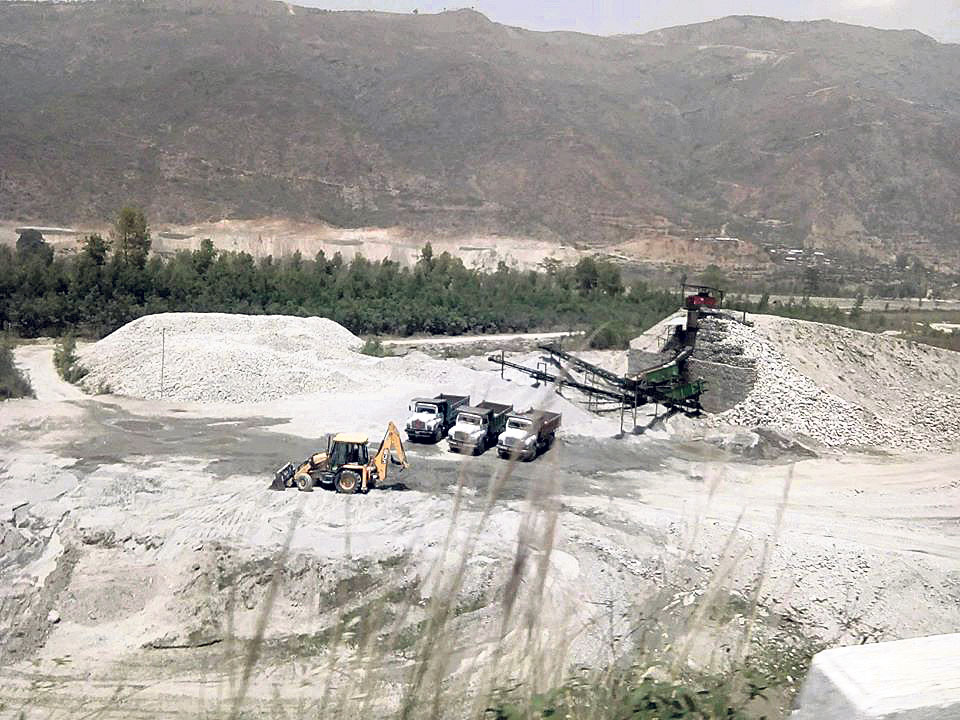 Excavators operating illegally on the bank of Sunkoshi River in this recent photo.

SINDHULI, May 16: Illegal extraction of construction materials has increased rampantly in Sunkoshi River in Ramechhap and Sindhuli districts in the last one year. A large number of entrepreneurs have been running crusher companies to excavate materials from the river. The excavation of sand and stones starts from the banks of Sunkoshi River in Khurkot of Golanjor Rural Municipality all the way down to various places of Sunkoshi Rural Municipality.

The river banks which looked beautiful until two years ago have now become an eyesore due to rampant excavation. There are large dug-up holes in the river which have not just diverted the flow of water but also affected its natural beauty.

Meanwhile, the locals have claimed that the excavation began after the formation of the local government. Manoj Dahal of Sunkoshi claims that large machines have been used for extracting construction materials from the river. According to him, if this is not controlled Sunkoshi will 'dry up' in a few years.

"Instead of formulating rules to increase tax and revenue for entrepreneurs, rural municipality should concentrate more on protecting the river from excavation," said Dahal.

Some of the locals have dared to raise their voice against the illegal excavation. But they lament that the local authorities have turned a blind eye to this issue despite being informed about it time and again. According to Kapil Koirala of Dumja in Sunkoshi Rural Municipality, the entrepreneurs have been neglecting the environmental effects while extracting construction materials.

Relatives of the local representatives are running crusher companies unabatedly by taking advantage of their ties with the authorities. Tourists have long been using Sunkoshi River for rafting purpose which is in threat as the crusher industries have been draining water by using 'hume' pipes.

Entrepreneurs have obstructed the flow of water in the Sunkoshi River near BP Highway for the movement of tippers which are used to carry excavated materials. "They have been extracting the construction materials by breaching the law and they have been backed by the elected representatives," accused Deepak Mishra, a Nepali Congress leader. Until a year ago, there were very few crusher companies in Nepal but the number has reportedly increased significantly in the last one year.

According to Mishra, it is really sad that the excavation done along the highway, which is regularly used by leaders and government officials, has failed to catch their attention. Deepa Bohora, chairperson of Sunkoshi Rural Municipality, has urged the entrepreneurs of her local unit to extract materials as per the government set standards. Kapil Koirala, one of the locals, informed that only six crusher and cement factories of the rural municipality have got permission to send three/four tippers for excavation but in reality there are dozens of tippers in the river.

The rampant use of excavators has made Sunkoshi's water muddy and polluted. That has ultimately resulted in the disappearance of aquatic animals as well.

BARA, July 22: Local representatives and provincial assembly members representing Kalaiya have been agitated in Bara over the government's decision to... Read More...

GORKHA, June 3: Newly-elected representatives of the local units in Gorkha have criticized the National Reconstruction Authority (NRA) for the delay... Read More...

Fugitive arrested from his house in Jumla
26 minutes ago