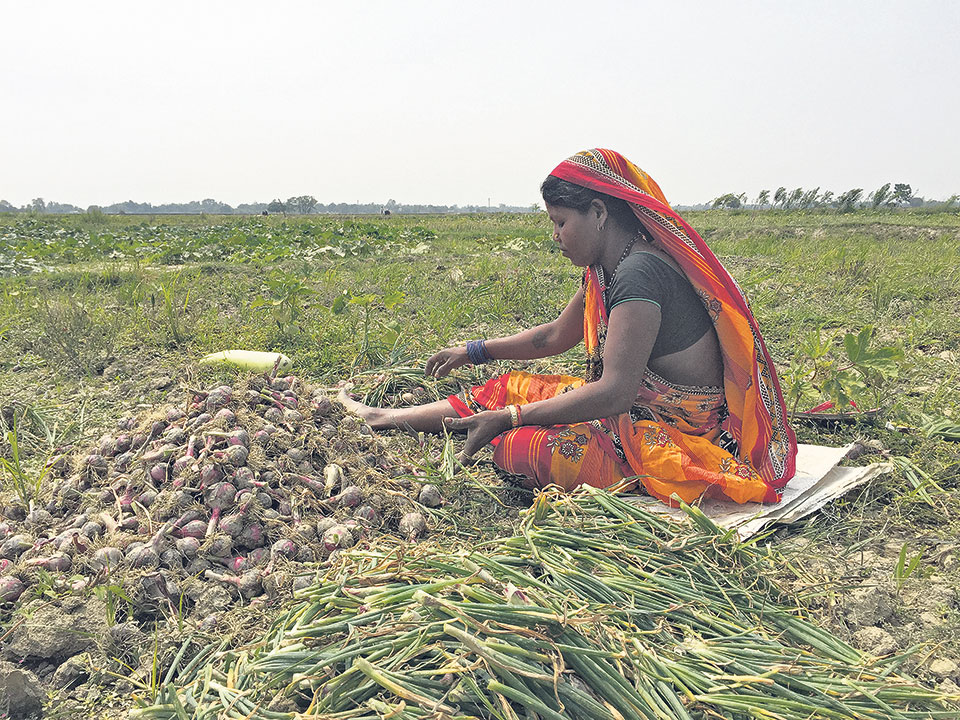 SIRAHA, May 16: Like a scene of an arid desert, hundreds of acres of arable lands in Siraha district wear desolate looks, either fully forsaken by the landowners or just awaiting the approaching monsoon for paddy plantation. However, a few kilometers from Lahan Municipality via Postal Highway, some plots of farms managed by a small squatter community belonging to the underprivileged Musahar group in Bhagwanpur Rural Municipality-1 stands out.

What one can witness there is a living story of transformation – the problem of water scarcity that posed barrier to agriculture has been solved with solar irrigation system so the once barren lands are now filled with lush green vegetables of different varieties. More significantly, the impoverished community that used to be fully dependent on daily wage labor for livelihood now has a stable source for self-sustaining means of income generation.

In a recent afternoon under the mild tarai temperature, Dukni Devi Sadaya dug grown onions from her farms and sat down in the field to cut off leaves from the onions. Her seven-member family would consume some of it while the most of it would be sold in a nearby market. Her family grows vegetables in two ~Ikathha~I of land that they recently leased from a landlord.

“Life is always difficult for the poor. But making a living has been much easier now for us,” said Dukni, a mother of two children. “Just a few years ago, we had barely any saving. Now after getting into vegetable farming, our family collectively saves Rs 2,000 per month and around Rs 25,000 per year after deducting all the expenses,” she added. Her two-year-old daughter just joined kindergarten while her son, 13, recently dropped out of school to go to India’s Delhi for menial labor works.

The Mushahar community in Bhagwanpur-1 consists of 40 households. Due to lack of other options, they have been traditionally working as farmhands for local landlords or daily wage laborers in nearby brick kilns and cement factories. They claim that they have been largely neglected by the government and deprived of progressive opportunities but slow and steady changes have been observed in the community after four NGOs collaborated to implement ‘Right to Food’ project in the area.

Since Musahars do not have a strip of land to call their own, the project leased four ~Ibighas~I of lands to 40 squatter families for a period of ten years or until December 2024. ‘Dalit Women Farmers’ Group’ was formed by including a female member from each of the household. The project then provided the members with trainings on vegetable cultivation, technical assistance for growing food crops, seeds and support in constructing fish ponds, among others. All of these gradually enabled the community to make small stride towards commercial farming, increase food security and uplift their living standards.

The NGOs – Care Nepal, National Farmer Group Federation, National Land Rights Forum, and Local Initiatives for Biodiversity, Research and Development (LI-BIRD)- teamed up in April 2015 to implement the project in Siraha, Udayapur and Okhaldhunga districts. Project officials shared that the project started with an objective to demonstrate new ways of addressing food scarcity and advocate policy responses through engagement with the local government, per information of project officials.

A visit to another Dalit settlement in Govindpur of Lahan-17 also provides an inspiring example of the efforts to adopt Climate Smart Agriculture (CSA) technologies, through which the community has managed to combat drought problems and increase agricultural yields. Women in the village are empowered to lead the project and improve livelihood from an array of options including fish farming, traditional crops and vegetable farming.

Under the project, the villagers have been using solar-powered irrigation for a measly sum of Rs 50 per hour and a tractor to plow field for Rs 250 per hour. The lands left barren by landlords have been leased to the villagers and are now filled with varieties of crops and vegetables throughout the year, including potatoes, onions, cabbages, tomatoes, pumpkin, bottle gourd, spinach, wheat and paddy. Whenever they need seeds, villagers visit the community-owned seed bank at Lahan-18, which is also supported by the Right to Food project.

Likewise, most of the households in Katari-5 of Udayapur district are built on unregistered lands as the locals own no real property. Living below poverty line, the community has learnt innovative ways to overcome their everyday struggles and work towards enhancing food security.

“I used to grow only pumpkin in my two kathha of garden. Now I have learnt to sow verities of vegetables including spinach, coraider leaves and potato, which helped me to cut household expenses,” said Mina Nepali of Sokla, one of the settlements of the ward. “I have also fenced the garden to prevent animals from destroying the vegetables.”

The project has also provided water tanks of 1,000 liters capacity to four households of Sokla to collect rainwater and ground storage for harvesting grey water. Seeing the apparent benefits in addressing chronic water shortage in the village, many households outside of the project’s target groups have replicated the technique to overcome their own everyday struggles.

While such efforts have obviously empowered and improved livelihood of many landless and mid-income farming communities, they still have a long way to go in terms of uplifting their standard of living. For instance, many households in the Musahar community of Bhagwanpur still lack proper toilets. Likewise, farmers in Siraha-13 have yet to find a way to prevent wild boars and nilgai (blue bull) from destroying their crops and vegetables. Nonetheless, the farmers said they are sensing the changes in the air and that their fate can only get better.

DOTI, April 21: Until a few years ago, the lush green fields and high agricultural output earned Mauwa the recognition of... Read More...

UN provides US$ 4.8 million for flood affected communities in Nepal