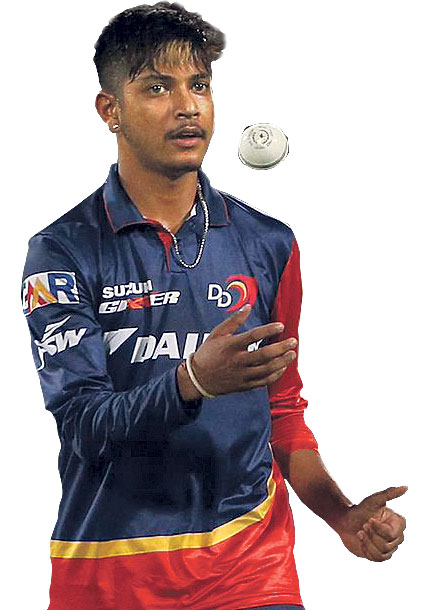 KATHMANDU, May 14: Sandeep Lamichhane bowled 8 deliveries to AB, conceding 10 runs including that mistimed six that could easily have fallen in the fielders’ hand any other day. On the other hand, he also delivered 8 deliveries to Kohli while conceding 7 runs. His best came against Patel when he dismissed him LBW. Moeen faced the other two deliveries scoring a run. No extras were delivered. He registered the match figures of 1-25 in four overs defending 181 for Daredevils whilst delivering 16 of his 24 deliveries to two of the best batsmen of T20 cricket in the world.

It was a debut to remember for the 17-year-old leg-spin sensation from Nepal. He definitely was helped by the fact that Delhi Daredevils, amidst all the turmoil in the ongoing season, has always backed the youngsters to do well to lead from the front by Captain ShreyasIyer and flamboyant Rishab Pant. The inclusion of Prithvi Shaw and Abhishek Sharma has hinted about the things to come next season rebranding the fresh fearless brand of cricket from young guns. Among the abundance of youth talents that has come up in IPL this season, Sandeep Lamichhane just well be the next big thing.

The pictures of Sandeep Lamichhane getting the maiden cap for Delhi Daredevils appearing on television screens before their match against Royal Challengers Bangalore imploded the Internet in Nepal. He has been in the thick of things leading almost every sports news headline in Nepal’s online and print media in recent times. From crafting his skills in Campa Chaur to playing arguably two of the best versatile batsmen of this era Virat Kohli and AB de Villiers in Feroz Shah Kotla, the journey has been beyond magic and it has only started for Lamichhane.

It was only yesterday when Indian Prime Minister Narendra Modi, during his 2-day Nepal visit, had batted for cricket and highlighted the role of Indian Premier League (IPL) in strengthening people-to-people ties between India and Nepal. Modi pitched for more sports engagement in the future to connect the two countries. And it happened. Rather coincidently that Delhi Daredevils had nothing to lose moving further in the tournament and were willing to give opportunities to all the fringe players in the squad.

It was calm, disciplined and acquitted debut by Lamichhane representing ‘millions of dreams’, as quoted by former captain and current coach Binod Das, back home. Like that kid from the school who always does his homework, for his first match and for most of the bowlers guilty of doing in brutal format of T20, Sandeep did not try too many variations. He stuck to his strength bowling accurate. Safe to say, he was not intimidated by the reputation of batsmen he was bowling at or the occasion as big as IPL.

Much credit to the management at the helms of Delhi Daredevils, Sandeep Lamichhane looks part of the setup as much as any foreign player in that squad at this point of time. The a fresh and fearless brand of youth cricket is taking over IPL, be it Mujeeb Ur Rahman for Kings XI Punjab of Shubman Gill for Kolkata Knight Riders, these youngsters are here to stay and have a say as IPL head to its second decade. Lamichhane will bear the flag for Nepal in these years.

SOME FACTS
-    Best bowling economy on IPL debut for Associate nation bowlers. (Broke M Nabi’s record of 1-28 in 4 overs for SRH against KXIP in 2017)
-    Bowling under lights for the first time.
-    Bowled against Virat and AB in tandem.
-    No extras concede in his 4 overs.
-    Delivered 2 overs in powerplay. Registered 1 wicket conceding 7 runs.
-    Didn’t concede a six in his first 22 deliveries before AB mistimed one on the leg-side boundary.

2nd over: Confidence was flowing when Lamichhane gave flight to his first delivery of second over to Kohli. Lamichhane takes his first wicket of IPL dismissing Indian veteran Parthiv Patel for a plumb LBW. The left-handed batsman has more than 20,000 professional runs in cricket and is touted as one of the best players of spin in India. It was a great start for the debutant from Nepal. He conceded only seven runs and registered his memorable maiden wicket.

3rd over: So far impressive Lamichhane earned respect from two of the very best in the trade, Virat Kohli and AB de Villiers, who played cautiously without taking any unwanted risks against a rookie bowler -- an unknown entity given full attention and respect. It was a scintillating stuff from Lamichhane.

4th over: Almost dismissed AB as the batsman targets the short boundary in the leg side. It was the first six of Lamichhane’s bowling. And it was close call. With a dot ball in his last delivery he capped an excellent spell of bowling in his first outing.