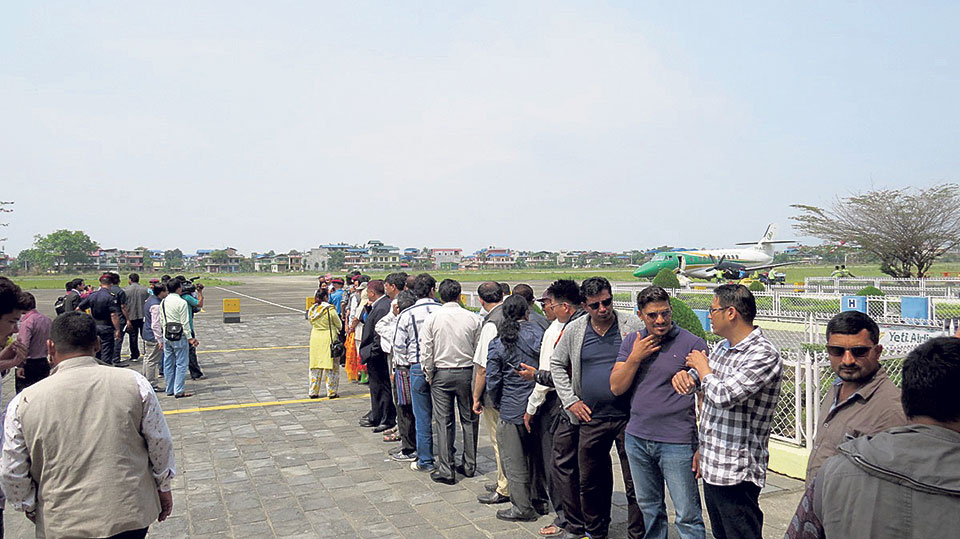 CHITWAN, May 14: Amid high flow of VIP and VVIPs, lack of security measures at Bharatpur Airport has been a matter of concern for its administration. According to the airport manager Pawan Kumar Gautam, the airport has not been facing difficulties in controling crowd during visit of such dignitaries.

“People get to the runway without any restrictions. Huge crowd gathers when a leader or minister lands here. It has become very challenging for ensuring security at the airport,” he said. “Families, friends, followers, and party cadres do not listen to us and it creates a lot of hassles in running normal operations,” he added.

With the country going federal, movement of dignitaries across the country has also grown. And Bharatpur Airport has become busier, too, according to Gautam.

“Following the implementation of federalism, political leaders visit have also increased exponentially. For most of them, Bharatpur has been both a destination and transit,” he elaborated.

A guideline regarding crowd regulation in the airport was prepared in April. However, the implementing it has been difficult owing to, what Gautam described as the ‘courtesy’ culture.

“People gather to welcome the dignitaries; they carry garland, and shawls. Amid such an atmosphere, we are finding it really difficult to bring the guideline into implementation,” he said. He added that the guidelines were supposed to come into effect starting May.

The airport administration is presently gearing up to restrict visitors flow into the airport through issuing entry passes. Once the entry passes come into action, we expect to control the crowd and thereby ensure security at the airport, Gautam said.

“Our major concerns are not the commoners or that there is a lapse in security arrangements at the airport gate. They are mostly the people who come to  receive dignitaries.  In some cases, the crowd is so overwhelming that some of them sneak inside the airport and reach onto the runway with garlands,” he narrated.

Chief of Nepal Police of Chitwan district, Deepak Thapa, has no different reading. The flow of VIP is almost regular but security mechanism is not very effective, he admits. “We work under extreme pressure, we try our best. But yes, it is challenging,” he said.

In the last 10 months, from the Nepal month of Srawan till Baishakh now, 83 VIPs have come to Chitwan through Bharatpur airport. Just in the month of Baishakh, eight such leaders made their way to Chitwan, according to the data of the district police office.

“We work very hard to ensure proper and secure reception. But the flow of the dignitaries is so high that we are always under pressure,” Thapa reported.

Police force provides security to VIPs from the airport to their destination. So, huge number of police force is used for this. In the view of the increased flow of such VIPs, no additional security personals have been added in the district.

“When VIPs come to Chitwan we get busy in making their security and escorting arrangements. While the number of visits of such digintaries have increased very much compared to the period before federalism, number of police personals with us remains the same. So, it’s not easy,” Thapa said.

Gautam compares the airport with a busy train station during such dignitary visits. Of among other leaders, he said that Dahal attracts bigger crowd.

Going by the new guideline, which Guatam hopes to get implemented very soon, only 15 people will be provided pass to welcome or see off VIPs. And limiting crowd to that  limit will make it far easier to ensure security, he said.

“So, we are going to mark restriction zone where no one will be allowed. And similarly, only 15 people will be provided with the pass in order to welcome or drop VIPs. Actually, the provision has already come into effect, but has not been much effective,” he said. “Now, all homework for this is over, we are going to prioritize its effective implementation,” he added.

KATHMANDU, July 5: The trend of categorizing security personnel as “being under vetting” by the UN and various other international agencies... Read More...