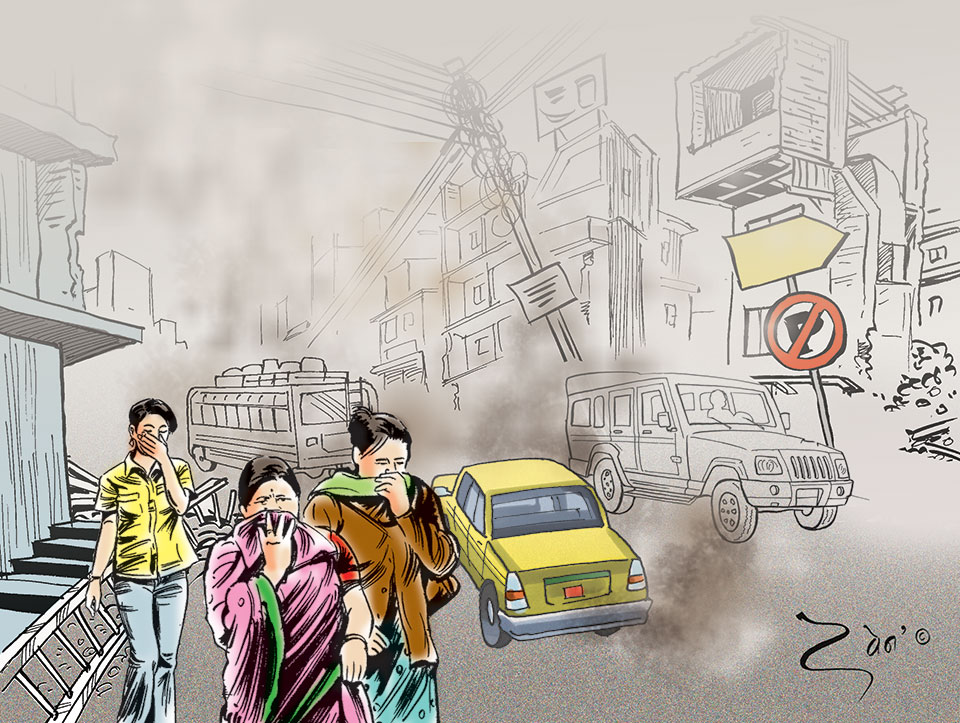 Dwindling water supplies, pollution and changing local climate are all indicators that Kathmandu valley is nearing its carrying capacity

Experts in the environmental field argue that the root of many issues in Kathmandu valley are due to the city’s rapidly growing population coupled with mismanagement. Dwindling water supplies, pollution and changing local climate are all indicators that the valley is nearing capacity.

Generally, the carrying capacity of a region is the maximum amount of individuals that an area can sustain based on resources such as water, food, plants, forest etc. This limit has been studied in animal populations, but humans are no exception. The carrying capacity of a region tends to cap out when a sensitive resource reaches its limit. Once at carrying capacity, a community cannot support itself. Sooner or later, nature will have its way. With an estimated population of three to four million, Kathmandu valley grows by about four percent every year, containing 8.3 percent of the country’s population.

“If you want to look at what is the carrying capacity of this valley, you can’t just look at land. If you want people to settle in this valley, people have requirements.” said Environmental Engineer Bhushan Tuladhar recently.

Tuladhar was referring to various resources needed to sustain urban life: food, water, clean air, housing and waste disposal being the basics. As Kathmandu develops and the standard of living raises, people will demand more of these fundamental needs as well as more sanitation, technologies and luxuries. Other countries have proven that when standards of living increase, so does individual consumption of resources. For example, the average American creates 19.8 tonnes of carbon, while the average Nepali creates 0.11 tonnes. Yet, Nepal’s carbon footprint per person has gone up by 80 percent since 1996.

One simple but vital resource that is coming up in short supply in Kathmandu is water. Biodiversity specialist, botanist and author Tirtha Bahadur Shrestha believes that this sensitive resource is an indicator of reaching carrying capacity.

“We must not have as many people here. Limit the people to the level as much as the water can sustain them. Don’t bring water from the outside” said Shrestha.

Global agenda
Population growth is a global issue but Shrestha argues that it negatively affects people the most in places like Kathmandu. The swell of a growing population is felt much more heavily when combined with poor urban planning. This combination becomes the leading local issue despite other issues placed ahead on the global stage.

“The concept of environment is changing every 10 years. Sometimes we are guided by the international issues, like biodiversity or climate change and pollution. We are guided by the global agenda. That is good, but we tend to ignore the real problem in the field, what happens with the people themselves,” said Shrestha.

The most pressing environmental issues in Nepal have not always matched the international focus. While previously, mass deforestation threatened the natural resources available throughout Nepal, successful programs like community forestry have taken this burden off the country. Now, we are presented with a new foliage problem.

Restoring greenery
Easier to manage than people is greenery. Shrestha calls the valley floor, “unmanaged”, as the floor is paved over with urban dwellings and roadways. He believes that this, along with other problems like pollution, can be managed by limiting growth in Kathmandu valley, while Tuladhar calls for a revival of open spaces.

“The greenery is the key issue right now in Kathmandu. Not only for beautification but actually for pollution control,” said Shrestha.

Greenery placed throughout the city can regulate air quality by absorbing carbon dioxide, the biggest pollutant in traffic-heavy cities, and letting out oxygen. While putting out some plants isn’t going to solve the root problems of pollution, they can definitely ease the effects that pollution has on the people of Kathmandu.

Multiple types of plants can be placed around the city as well as in private residences, such as the rooftops of houses. Plants in the home work as a natural air filter and improve the overall health of the household.

“You have to select them very carefully,” warns Shrestha, as these plants must fit the new climate of Kathmandu to minimize water use. He claims that there are 40-50 trees that are suitable for the valley that have been extensively researched, but not much action has been put in place to plant these trees. These trees include Jacaranda, Celtis, Camthor, Eucalyptus and Populus.

Additionally, open spaces are a key area for greenery. There are 887 designated open spaces in Kathmandu valley, but often spaces are sold off to developers. These spaces are important both for plant and human life, as they are places of interaction in an urban setting.

“Open space is basically a space where people experience a city,” said Tuladhar.

Taking action
So what can you as a citizen of Kathmandu do? While the limit to population of the valley will have to be part of a larger government effort, you as an individual can work with others and independently to limit the effects of overpopulation, like pollution. Taludhar’s advice to the public is that, “people need to be a) aware of these issues, b) raise their voices and c) participate in community level action.”

As citizens of a republic, people can reach out to local representatives to enact change. If the public demands certain actions, government officials are inclined to listen and make adjustments. On an individual level, people can reduce and properly manage their waste. People can limit their own pollution by checking the emissions on their car or motorbike as well as walking and using public transport whenever possible.

As for greenery, the combined effort of government officials, volunteer groups and individuals could plant greenery around the city to bring back some of the natural ecosystem of Kathmandu. There was a time when local communities managed their own parks and open spaces. This too could be revitalized.

All environmental issues have solutions. The question is whether or not we will choose as a society to work towards these sustainable goals, starting with communities like Kathmandu.

The author is an American journalist working with Internship Nepal

KATHMANDU, Nov 23: The body of Santa Bahadur Tamang, a migrant worker who died in Malaysia in the course of... Read More...

KATHMANDU, Aug 20: The police here have returned the vehicles operating on Araniko and BP Highway without road permit back... Read More...