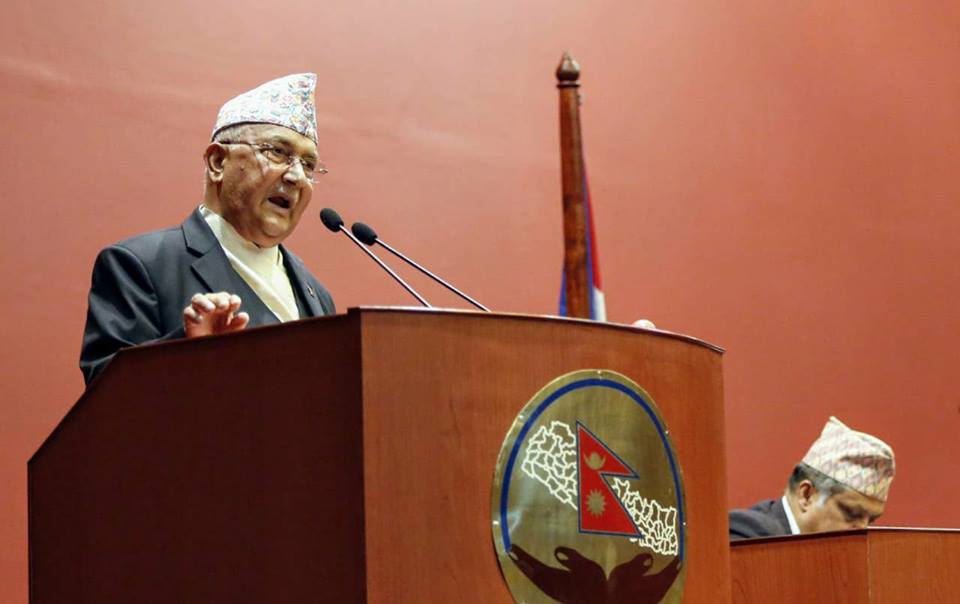 KATHMANDU, May 13: Prime Minister KP Sharma Oli expressed his commitment to work for national interests and priorities by respecting Nepal’s sovereignty with its neighbors based on mutual respect.

During his debriefing session at the federal parliament, Oli said that he along with his Indian counterpart, Narendra Modi had dwelt on numerous issues that prioritized Nepal’s development as per its needs.

“I will take responsibility of any words that are against Nepal and its interests,” Oli said adding that the country could not afford to spend time delaying development and prosperity.

“We are a small country with small economy and population. If we don’t work to propel development, we will always be inferior to the world,” Oli said adding that a lot had to be done to ensure economic prosperity and development in the country.

“We’ve come a long way and now, it is time to materialize our dreams without compromising on our sovereignty,” Oli said. “In this regard, I would like to state no agreements have been made that would affect Nepal and its priorities.”

Oli said that the 1950 treaty was ‘humiliating’ and he expressed hopes to improving it. “The Eminent Persons Group has been reevaluating existing treaties and we hope the humiliating treaty and its issues would be addressed,” he said.

Oli said that his meeting with Modi dwelt to address Nepal’s concerns in the 2014 power trade agreement that provides 51% share to India, expedite and complete construction of Arun III within five years, Pancheshwor projects, Butwal-Gorakhpur transmission line, and improve connectivity through the postal and NH-9 highway.

“As our electricity needs are alternative, we have proposed establishing electricity bank to adjust power supply demands of both countries,” Oli said.

Oli said that Nepal’s trade deficit with India was at its extreme. As a result, he shared that the two prime ministers had directed foreign ministries of both the countries to identify ways to speed up economic development by reevaluating existing treaties.

“We’ve asked the ministries to examine existing treaties and loopholes to come up with measures to reduce the trade deficit within three months,” Oli said adding that one of the ways to reduce deficit was by increasing flow and availability of Nepali products such as tea, cardamom and ginger in Indian markets.

“As we await recommendations from Ministry of Foreign Affairs, we must resolve existing trade issues in agricultural products,” Oli said.

Oli shared that he had directed concerned bodies to conduct feasibility study for four additional air entry routes through Bhairahawa and Biratnagar. At present, international flights enter Nepal through Birgunj only.

Additional air routes mean that Nepal would be able to generate revenue with longer flight durations in the country’s sky.

Oli welcomed Modi’s gestures during his third visit and highlighted his remarks respected Nepal’s sovereignty as it expressed commitment to support Nepal with its needs and priorities.

“We expect continuity of the warm gesture from Indian government as we push for collaborations to develop Nepal based mutual respect,” Oli said adding that the visit by Modi was fruitful for both the nations.

Local authorities decide to enforce odd-even rule for vehicles in Kathmandu Valley from Friday midnight
6 hours ago
99 Nepali workers set out for Israel; labor minister, ambassador reach TIA to see them off
17 hours ago