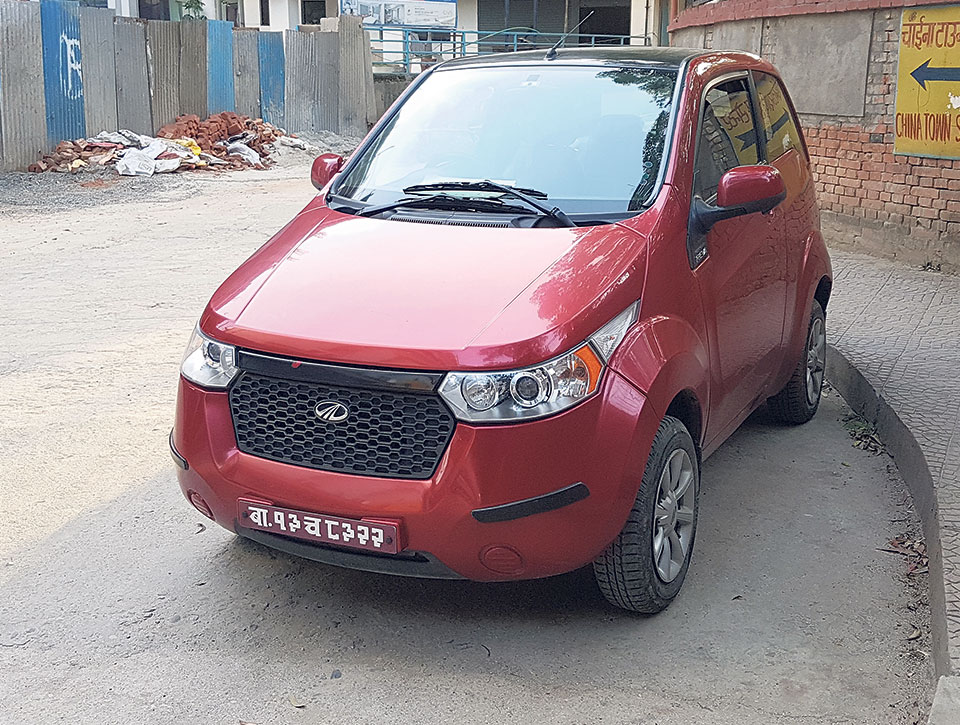 KATHMANDU, May 10: More Nepalis are opting for electric cars in recent months, thanks to improved power supply, traders say.

Electric motor vehicle distributors say that they have seen a surge in sales in recent due to factors like reliable power supply and people's desire for carbon free transportation.

Three electric car brands -- BYD, Mahindra and Kia -- are currently available in Nepal. Distributors of these brands claim that customers are becoming interested toward electric cars as they want to ensure mobility even during shortage of fossil fuel like the country faced during the Indian blockade two years back.

Sales of EVs in the local market may be negligible compared to motor vehicles running on fossil fuel, but they are becoming more visible than ever.

“The craze for EVs is good for the country. Although I do not say that the passion for such cars in the Nepali market surpasses that of China and Scandinavian nations, I would for sure say that Nepali population is more attracted to EVs than that of nations such as the US, UK, Sri Lanka, the Philippines, and Bangladesh to name a few,” Sahil Shrestha, marketing executive at Cimex Inc Pvt Ltd -- the authorized dealer of Chinese EV company BYD in the Nepali market.

According to Shrestha, 26 BYD motor vehicles are running in the streets of Nepal, while 20 more have been ordered.

The BYD e6 SUV, which gives a mileage of 400 km in one charge, costs Rs 6.6 million, while the one with 300 km mileage is available for Rs 5 million. “If 20 percent battery is left, the car can be fully charged within 30 minutes and it will take up to 1.5 hours to fully charge the car from zero percent battery. At this rate, one can drive 400 km for just Rs 400 worth of electricity,” added Shrestha.

He also said that five BYD c6 buses will be deployed at the Gautam Buddha International Airport which is under constructed in Bhairahawa.

Kia has sold 114 Kia Soul EVs in the Nepali market since 2016. “Despite higher price tag, around 15 percent of our total sales come from EVs these days,” said Paramatma Paudyal, manager of the automobile division of Continental Trading Enterprises Pvt Ltd -- the authorized distributor of Kia in Nepal.

While the Kia EV exi is costs Rs 5.6 million, the exii variant is available for Rs 5.8 million, according to Paudyal.

“We were selling as much as five units every month right after the end of load-shedding in Kathmandu and other major cities. Now, the sale has dropped to an average of two units per month. This is mainly due to tightening of automobile financing by banks,” he added.

Banks finance 80 percent of the cost of EV, while such financing for cars running on fossil fuel is only 65 percent.

Sijan Neupane, marketing manager of Agni Group -- the authorized distributor of Mahindra Automobiles – also said that there has been a surge in sales of EVs in the Nepali market in recent months. “We have sold around 300 units of Mahindra e20 cars in the past five years. Sales increased drastically following the economic blockade of 2015,” he added.

The four-door variant of e2o costs Rs 2.8 million. The two-door variant, which is no longer available, used to cost Rs 2.4 million.

The car gives a mileage of up to 150 kilometers in full charge. Full charging takes around five hours, according to Neupane.

He, however, acknowledged that EV buyers are usually those who have at least one fossil fuel car for long drives and rugged roads.