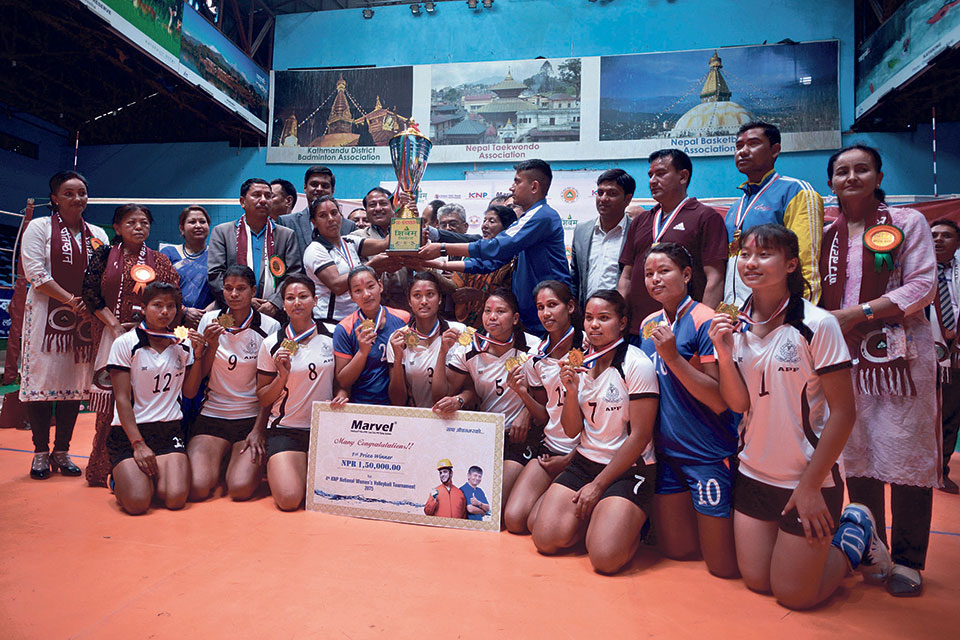 Members of Armed Police Force pose with the trophy after defeating Nepal Police Club in the final match of the KNP Japan Women’s Volleyball Tournament at the NSC’s Covered Hall in Tripureshwar, Kathmandu on Tuesday. Photo: Bijay Gajmer

KATHMANDU, May 9: The Armed Police Force laced with national players has lifted the fourth KNP Japan Women’s volleyball tournament for the fourth consecutive time in as much years of the inauguration of the marquee event on Tuesday. In a final match played at National Sports Council (NSC)’s covered hall, Armed Police defeated the fellow departmental team Nepal Police Club in straight sets.

Armed Police won the first set by 25-12 as there was no looking back from the strong start. Nepal Police further succumbed to sets defeat of 25-19 and 25-17 as Armed Police Force ran away with fourth title in fourth edition.

Armed Police skipper Binita Budhathoki credited the combination play of experienced players to take them past the winning line in all important final match. “We are a very experienced side. Other teams are emerging as strong challengers every time. Nepal Police performed really well but we had a more difficult game aginst New Diamond in the semi-final which helped us access the final match,” said Budhathoki after the final match.

Similarly, the coach of the winning side Gyanendra Bista mulled on the distinct performance of team’s spikers and other experienced players to setup an easy win in the final. “We blocked the shots and counter-attacked accordingly. Our spikers were in top-notch form to give us the win,” said Bista. However, the Nepal Police coach Rupesh Bista rued the lack of experience in countering the opposition’s tactics the main cause of failure. “Our link-up play between receive and spike was poor which cost us the game,” said Bista.

Elsewhere, New Diamond secured the third position in the tournament after overcoming the known rivals Western Volleyball Association in the straight sets of 25-14, 25-16, 25-14. They received the cash prize of Rs 50,000.

The award for Best Spiker of the tournament went to New Diamond’s Pratibha Mali whereas her teammates Shalina Shrestha and Lalita Nath bagged the awards for Best Libero and Best Quicker respectively.

Why was the University Bill introduced, leaving aside the Education Bill?
19 hours ago
Bill on money laundering to be amended through fast track process
3 minutes ago

Gold price increases by Rs 500 per tola
33 minutes ago