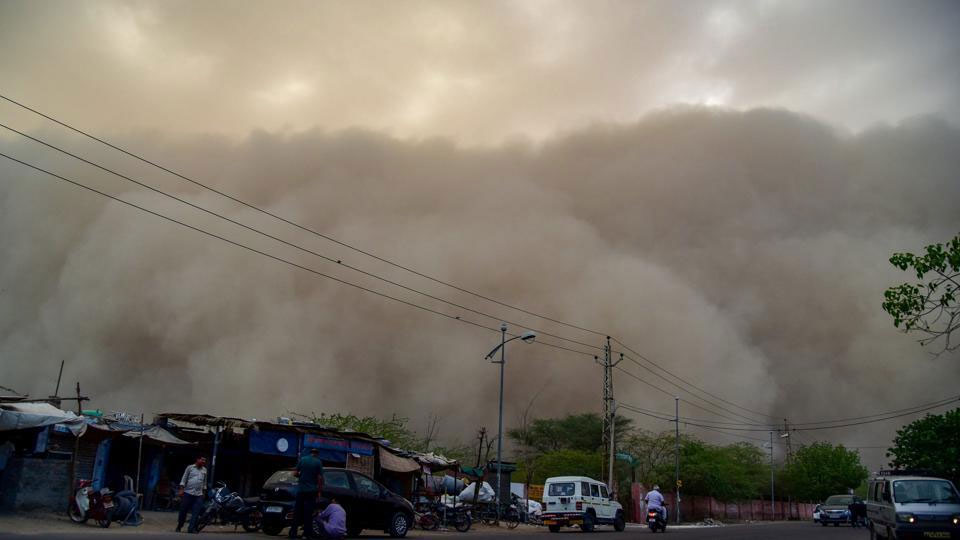 NEW DELHI, May 8: Met office has said a storm is expected to hit on Tuesday towards afternoon and evening. Lightning, thunderstorm, rain and gusty winds, up to 70 km per hour, are expected.

A high-velocity dust storm hit parts of north India on Monday night with a wind speed of up to 70 kilometres per hour, the Met office said adding the squalls are likely to continue on Tuesday too.

“Thunderstorm with squall conditions are expected with wind speeds reaching 50-70 km/hr in some places in Himachal Pradesh and Uttarakhand . Jammu and Kashmir, Haryana, Chandigarh, Delhi and west Uttar Pradesh could also witness these conditions, ” the Met office said.

In a few regions of Punjab, east-Uttar Pradesh and east-Rajasthan strong winds are expected along with thunderstorm.

“The actual storm is expected to hit today towards afternoon and evening. We are expecting lightning, thunderstorm, rain and gusty winds that could reach up to 70 km per hour,” said Kuldeep Srivastava, a senior scientist with the regional meteorological office.

Trees and electricity poles were uprooted in several areas with reports of power outages.

Authorities issued a list of dos and don’ts and shut schools in the wake of the weather department warning. While the Noida and Gurugram authorities have ordered closure of all schools, the Delhi government has closed only the evening schools.

Delhi police received at least 31 calls from people complaining about uprooted of trees, collapsed walls and snapped power lines. One person was injured in Nihal Vihar when a tile fell on him. Power cuts were reported from west Delhi.

The Jaipur district administration has advised people to stay indoors. The Haryana government has cancelled the leaves of all officials in municipalities. Fire and other emergency services, too, are on alert.

The Delhi traffic police has urged people to take precautions while commuting and the Delhi Metro said it was on alert for heavy rain and thunderstorms.

Met officials have attributed the approaching rain and thunderstorm to a western disturbance and cyclonic circulation that are likely to affect northwest India between May 6 and May 9.

“While a western disturbance would hit the western Himalayas and the plains of north India, a cyclonic circulation has also developed over north-east Rajasthan. There is also a trough of low pressure between Rajasthan and Madhya Pradesh. These systems would trigger rain and thunderstorms across north India and Delhi-NCR,” an official said.

Last week, at least 124 people were killed and more than 300 others injured in five states in a powerful dust storm and rain that hit north and west India.

Indian rescue workers picked their way through the last of the mangled carriages of a derailed train on Monday to... Read More...