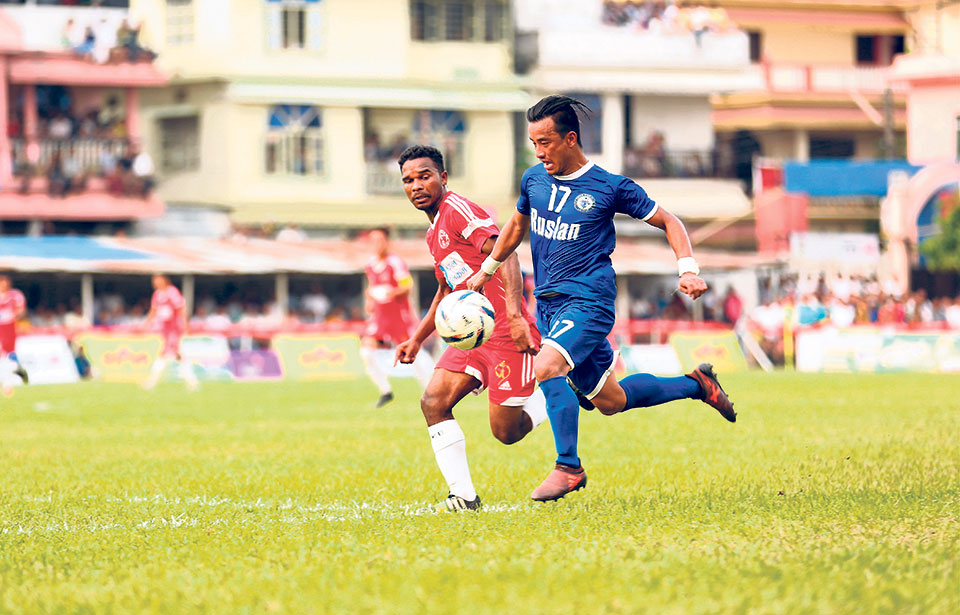 Players of Ruslan Three Star Club (right) and Nepal Police Club in action during a quarterfinal match of the Damak Gold Cup football tournament in Damak on Sunday.

JHAPA, May 7: The pre-tournament favorites of the Damak Cup Ruslan Three Star Club has been knocked out from the first Damak Gold Cup football tournament after going down 1-0 to the departmental team Nepal Police Club missing out on a semifinal place on Sunday.

Police Club’s Abhishek Rijal scored in the 57th minute of the match to send Three Star crashing out of the tournament. Rijal lashed onto a delivery from the corner kick to head in the decisive goal of the match.

The first half of the match ended in a goalless draw after plenty of chances from both sides were either parried away or missed to hit the target. In the eighth minute of the match, Police Club’s Sunil Bal missed a golden opportunity to hit the target from the close quarters of the goalpost. In the 67th minute, Bal again failed to finish as another chance went begging from the close. Similarly, in the 74th minute, Three Star’s shot was blocked by the opposition defender to keep Police Club’s lead intact.
Police Club’s experienced goalkeeper Kiran Chemjong was at the saving end of the many good shots from the Three Star attackers. He was adjudged man of the match for his assuring performance at the Police Club goal. He received Rs 11,000 in cash for the award.