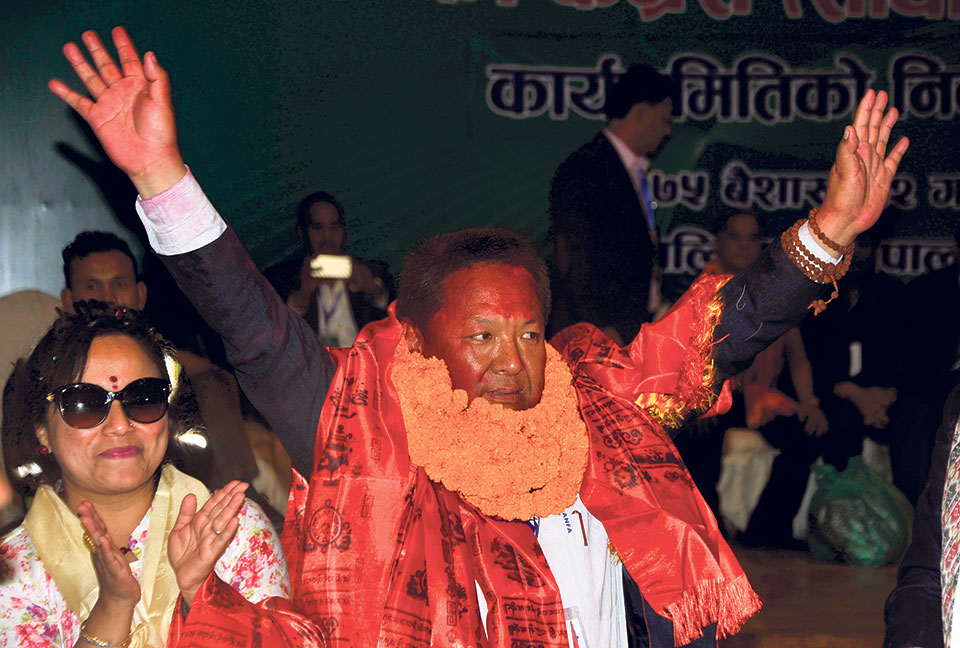 Karma Tsiring Sherpa waves to his supporters as he celebrates after being elected as the president of All Nepal Football Association (ANFA) in Kathmandu on Saturday. Photo: Keshab Thoker/ Republica

KATHMANDU, May 6: Karma Chirring Sherpa has taken over the leadership of the All Nepal Football Association (ANFA) with a big-margin win over Mani Kunwar, who had withdrew from the election process.

Sherpa was declared winner on Saturday though his victory had become certain on Friday as his only rival candidate Kunwar announced his withdrawal from the election process citing that the elections was being conducted in contravention of the statute of the ANFA. But, the election committee followed all the election process as the deadline to withdraw candidacy had already been crossed before Kunwar’s announcement.

Along with Kunwar, vice-presidential candidate from the same panel Ganesh Bahadur Chand, who is also President of the Kanchanpur District Football Association, had announced to boycott the election. Chand said he decided to withdraw from the elections as he was also one of the petitioners to file the case, which is not yet settled.

Of the total 77 votes cast for the presidential post, Sherpa secured 63, while Kunwar got only 12 votes. One vote was invalid.

Nemwang garnered 61 votes, while Singh got 58, Thapa secured 52 and 39 votes were cast for Khadka. Shahi received 33, Rana 24, and Ullah and Chand got 15 and 5 votes respectively, while Rai was without a single vote.

The newly-elected President Sherpa, who is also president of the Himalayan Sherpa Club, has been campaigning against the leadership of the ANFA from a long period of time, said that the ANFA General Assembly voted on the issue they raised. He added that the outgoing President Narendra Sherpa and General Secretary Dhirendra Pradhan gave an appropriate solution for the organization in difficult circumstances.

“We have raised many issues in the past and now the time has come to work on that. It was a democratic election. While moving forward, we will incorporate also the friends who lost the election, according to the spirit of democracy,’’ Sherpa further added, “A capable team has been elected, so it won’t be difficult for me to work for the betterment of the ANFA.’’

Sherpa said his team will soon decide when to organize the national league forming a technical committee meeting. He also committed to formulate policies required to settle financial issues and concerns of employees and players, among other matters within in next three months. He also announced to introduce grassroots programs in 45 districts within a year.

“We will create an environment helpful for the players to survive by playing football. We will also include a provision of insurance for national players. Various other things will be decided in Monday’s meeting,’’ he said.

Meanwhile, former President Ganesh Thapa congratulated newly-elected President Sherpa, who had been challenging Thapa on various corruption charges and “his autocratic rule” in ANFA.
Thapa has remained out of ANFA’s football leadership after he was banned by the world football governing body FIFA on November 16, 2015 on corruption charges.

“There is a lot to do for the development of football. We will introduce programs for that and support from a lot of people is needed for the implementation of those programs. Everyone should unite for good works and new programs will incorporate everyone in the campaign,’’ Sherpa said.

“Our main objective is to create an environment favorable for development of football with good programs and FIFA’s actions in the past have created a strong ground for that. We will work mainly as per our promise to transform the ANFA into a corruption-free organization,’’ Sherpa committed.

KATHMANDU, May 5: Karma Tsering Sherpa has been elected as the President of All-Nepal Football Association (ANFA). ... Read More...