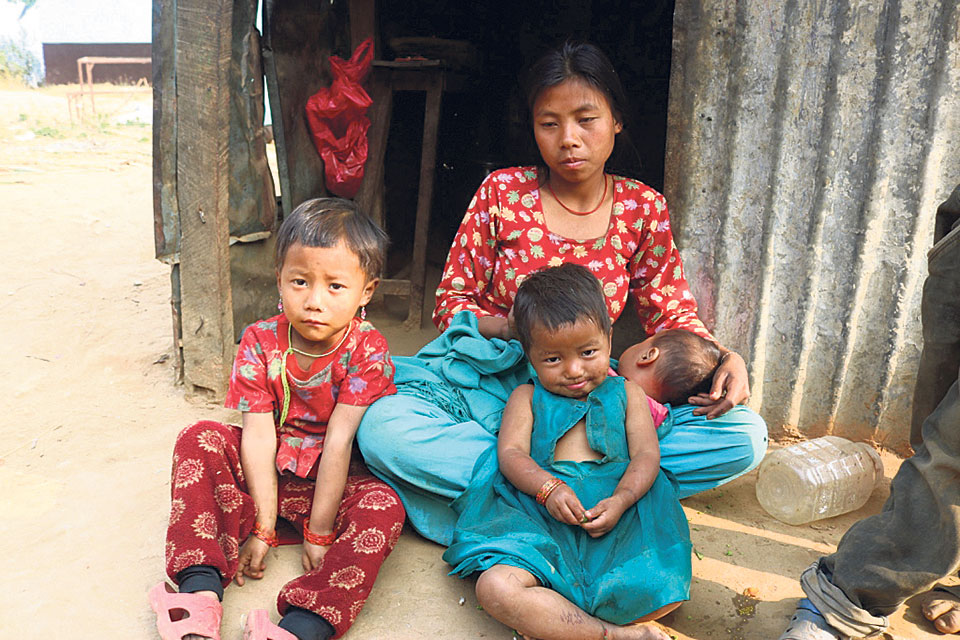 Rita Chepang of Benighat, Dhading with her three daughters at her house in this recent photo. According to doctors all of them suffer from malnutrition.

DHADING, May 3: Rita Chepang, 24, suffers from malnutrition. She came to know about it from a health professional when she visited a health center recently. A resident of Benighat, in Dhading, she was advised to take balanced diet and do physical exercise for improving health condition.

Ironically, that was an advice that she can afford to follow. Along with her, her children are also victims of malnutrition. And Rita is concerned about her children’s health more than hers.

“All my daughters are affected by malnutrition. I came to know about it when I had taken them to a health center recently. The doctor had advised me to provide nutritious food to them. However, we are poor people and as such it is not possible for us to follow the doctor’s advice,” Rita said. “We depend mostly on wild fruits and roots. Yield of crops that we grow hardly feed us for some months,” she added.

Rita got married when she was 18. Within six years, she has given birth to three daughters. The eldest one, Pramika, is five now, Renu is three and the youngest Rajita is just1-year-old.

“I had been to health post even earlier. At that time, I had only two kids, this third one was not born. At the time, doctors told me we were suffering from malnutrition and suggested that we visit a good hospital in Kathmandu for treatment,” reported Rita. “But since I didn’t have the money for the treatment, I instead sought treatment from a Dhami (shaman),” she added.

Rita shared that for some months she tried to save money for consulting a doctor in Kathmandu, but her efforts failed to materialize. The main factor behind it was the family’s struggle to manage square meals. “I gave up the idea of going to Kathmandu for treatment and instead tried consulting a Dhami considering the fact that it would be lot cheaper,” she said.

The delay further deteriorated health of the family members. They became further thinner and feeble. Later, with her community’s help, she somehow managed to travel to Kathmandu and consulted a hospital. Where, as expected, she and her daughters were diagnosed with severe malnutrition.

“Doctors told me that my children were born with malnutrition and continue to suffer from it. They said that they will get better with continued treatment and warned their health would deteriorate if proper care is not taken,” Rita shared.

Rita’s small hut is just next to a cow shed. She has a small plot of land behind her hut where she grows vegetables and crops. The yield from this farm does not suffice to feed the family. “Crops we grow on our farm feed the family for around three months of a year. Rest of the year, we depend wild fruits, berries and roots from the forest,” she said.

Rita’s story is actually very common among Chepangs living here. Poverty is everyone’s ‘destiny’. And finding children with big belly, thin hands and legs with feeble figure is very common.
According to Rita, taking care of children is not her priority. For her the priority always is to find food. If she does not toil hard from dawn to dusk, children have to starve. Stock of food is almost an unknown concept for Chepangs.

“We leave children at home and go out in search of food. If we don’t do that, we can’t feed them. Everyone in our community has the same daily routine,” she reported. Health and hygiene are alien concepts for the Chepangs whose children bothered by flies as they live alone at home amidst filth around their home.  “This is how our life and I don’t know if it will ever change,” Rita wondered.
Early marriage, early motherhood, lack of care and nutrition or medical assistance and shortage of food is very common in the Chepang community. Similarly, lack of education, job, opportunities and awareness keep them almost isolated from the rest of the world. Chepangs lamented that they do not have land ownership certificate either.

“We were born poor and it seems that we will die poor. Sometimes I feel I should not have given birth to these children. There’s only suffering for them,” she stated.

Most of the Chepang girls marry before 15 years of age. By 20, they become mother of more than one child. Most of the Chepang women and children in Busrabang, Chothar, Herang, Chyangli and Barbhanjyang suffer from fragile health.

As per the report of several organizations, 25.2 percentage of the total population in the district is that of Chepang. And nine percentage of Chepang children have malnutrition.

New strategy to save kids from malnutrition

POKHARA, Jan 14: Health Minister Gagan Kumar Thapa has said that a new strategy would be developed in consultation with... Read More...