Educated couple opts for organic farming for a cause 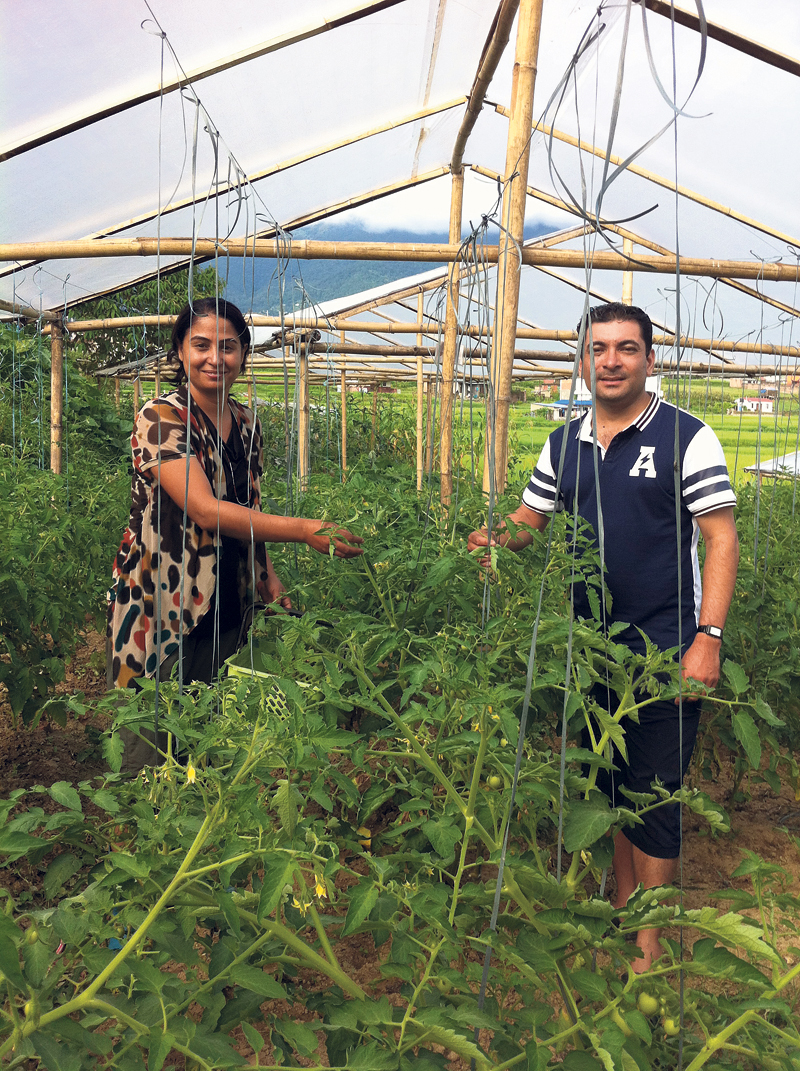 Bimala Acharya and her husband Anim Dahal at their vegetable farm in Gokarna, Kathmandu.

KATHMANDU, Aug 18: Her mother died of cancer caused probably by consuming vegetables contaminated by pesticides. The incident made her determined to do something against using pesticides.

“My mother passed away five years ago due to lymphatic cancer at the age of 55,” said Bimala Acharya, 38. “I was told that the cancer was caused by pesticides or insecticides. Then I decided to create awareness by promoting organic vegetable farming,” she added.

Acharya abandoned her lucrative business of selling goods to security forces to pursue organic farming. She was touched by her mother’s loss and doing something in her memory was more important to her than making money.

“Then I started farming organic vegetables at Gokarna of Kathmandu by leasing three ropanis of land and investing Rs 100,000 five years ago,” said Bimala, who completed her Bachelor’s Degree in Sociology and Culture.

After a year, she could not meet the demands for organic vegetables and she acquired another four ropanis of land on lease to expand her farming. Bimala started selling her products at Bhatbhateni Departmental Store in Kathmandu. The demand of her organic vegetables soared immediately. Then again, she added another seven ropanis of land where she produced salad items, curry vegetables as well as milk by adding two cows.

Now, she sells her products at Big Mart and other places.

Bimala is fully supported and helped by her husband Anim Dahal, 37, who is a Masters’ Degree holder in English. Dahal has worked as a teacher for about two decades in schools and colleges. He also works as an interpreter for UN and BBC world service.

“I am ready to quit other profession. I am so attached to agriculture that I can’t leave farming until my death,” he said.

The couple, who is from Sunsari district, fell in love while studying in campus and got married. They have a eight-year-old daughter and currently reside in Budhanilkantha, Kathmandu.

They left Gokrana and moved to Budhanilkantha a year ago, where they have hired seven ropanis of land at the cost of Rs 20,000 per ropani per year. The couple has given jobs to three persons in their farm and has 200 local species of chicken and two cows.

Smiles on their faces and the vigor with which they work clearly demonstrate how much they are enjoying their work. The couple sells about 15 kgs of organic products every two days, 100 eggs and 15 liters of milk daily, which fetches them some Rs 1.5 million annually.

“We are planning to produce about 20 kgs of vegetables, 500 eggs of local chickens and 20 liters of cow milk with a target of Rs 200,000 profit per month by investing a total of Rs 2.5 million,” they revealed their plans.

“We will provide jobs to at least 10 persons after six months. We are now in need of organic certification process and quality testing mechanism so that we can export our products to the international market,” said Dahal.

“We are also thinking of making our farm a research center for students and international visitors.”

At a time when young generation and educated persons are losing interest in agriculture, they have become an inspiration to all.

“We don’t need to go anywhere but have to have patience, dedication and honesty. And above all we need to work hard,” the couple explained the formula for success in life.

“We use internet sources when we need to learn about knowledge and skills of agriculture, instead of unnecessarily hanging on social networking sites.”

The couple has been awarded with various rewards and facilities for their exemplary works. Only a month ago, they received a grant of Rs 1 million from the government.

Nepal Jaycees rewarded Bimala with National Youth Award for her contribution to organic farming. She has also provided training of balcony vegetable farming for 250 households.
They have formed three community groups involving about six dozen women interested in organic farming.

MAHOTTARI, May 15: Province no 2 Minister for Agriculture, Shailendra Sah, has called for tapping into the organic agricultural technology for... Read More...

INARUWA, Oct 2: A couple died in a road accident in Sunsari district along east-west highway on Sunday. ... Read More...

Govt awards construction contract of flyover in Gwarko, Lalitpur
9 hours ago
Residents can install EVs charging units for their personal use: NEA
20 hours ago

Users of broadband internet on the rise in Nepal
22 hours ago
99 Nepali workers set out for Israel; labor minister, ambassador reach TIA to see them off
5 hours ago