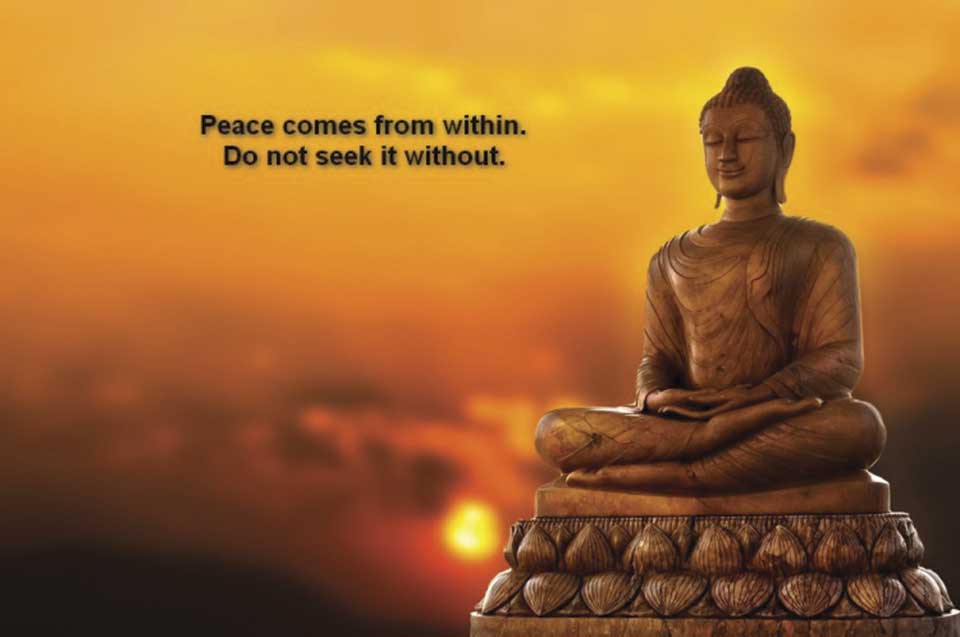 Buddha’s motive was not to create a mass of followers and establish a new philosophy. He just wanted people to come out of suffering.

Suppose a man is wounded by a poisoned arrow and is brought to a surgeon. Imagine the wounded man says he would not let anybody take that poisoned arrow off him unless he knew who shot it, what his caste was, whether he came from a noble or an ordinary family, and what his name was. Imagine him demanding to know first whether his attacker was tall, short, or of medium height, whether his complexion was black, brown, or golden, and from which village he came. If the wounded man says “I won’t let anybody remove this poisoned arrow unless I know the answers to these questions,” who will be a loss? Who will die?

That was the Buddha’s question to one of his disciples, Malyunkyaputra, who at certain stage became skeptical of Buddha’s wisdom and his way of teaching.

He wanted the Buddha to answer some metaphysical questions: Is the universe eternal? Are the soul and body the same or different? Does the Tathagata, the Buddha, exist after death? So on and so forth. He insisted that the Buddha gave him definite answers, and even threatened to quit learning if he didn’t.

But the Buddha had no interest in engaging in metaphysical discussions just to keep a disciple because he knew it would not help him. He knew very well that it was the reaction of the disciple’s doubting mind, who was trying to get his master to confirm to his preconceived beliefs and get some theoretical ideas to hold on to.

Somebody as wise and compassionate as the Buddha would never theorize things that might seem to clear confusion at the first instance, but that would ultimately send the questioner into another form of delusion.

The delusion that would come from theorized concepts would prompt one to take things as absolute. If the Buddha answered such questions a whole can of worms would be opened. People would engage in philosophical discussions and fight over those concepts. People would stop working to purify their minds, and keep themselves mired in sufferings. The Buddha knew it very well.

The Buddha’s motive was not to create a mass of followers and establish a new philosophy. He just wanted people to come out of suffering. For 45 years after his enlightenment, he taught people one simple thing: Know your mind and come out of your suffering.

To Malyunkyaputra, Buddha said: I will not answer these questions. I will not declare whether the universe is eternal or not, and so forth. I don’t answer these questions because they are not connected with the goal, they are not fundamental to the holy life.
“They do not lead you to disillusionment. They will not calm your mind or give you direct knowledge. They are not unbinding, and they will not awaken you,” Buddha said.
The Buddha gave 84,000 sermons until he left his body, but in those sermons, you will not find theoretical and metaphysical concepts.There, you will only find wisdom to work out your own salvation.

Probably the Buddha was the greatest scientist the world has ever seen. He discovered the true nature of human existence. Two thousand five hundred years ago, he saw, with his eyes closed under a Bodhi tree, the truth about the human mind, body, and the entire existence thereof. But he did not formulate theories. Neither did he order followers to obey them. Whoever came to him, he just encouraged them to explore the truth for themselves.
Appa Dipo Bhava—be your own light—was his core message to the people. He never encouraged people to have blind faith in him, or in any other divine being. His sole concern was to help people come out of suffering. In a very scientific approach, he explained the nature and functioning of human mind.

The Buddha did not make absolute statements except for a few. These few statements are fundamental to the human nature, and hence to his teaching. I am not aware of anybody, from any religion or philosophical background, refuting the truth of these statements.

He said suffering was not due to our being ignorant of metaphysics or philosophy, but due to being ignorant of how our mind functions. The opening verses of Dhammapada, an important compendium of the Buddha’s core teachings, tell us: “Mind precedes all phenomena. Mind is their chief; they are all mind-made. If a person speaks or acts with an impure mind, suffering follows him like the wheel that follows the foot of the ox (for an ox-driven cart). And if a person speaks or acts with a pure mind, happiness follows him like his never-departing shadow.”

The Buddha’s teaching was aimed at helping people be in a state of pure mind. Everything else was secondary. Many philosophers from other traditions and his own disciples came to him to discuss different theories. But he would discuss on them or put them aside according to their own merit. Anything that would not help one purify their minds, were unimportant for him.

The Buddha gave this answer because, to him, they were connected with the goal, and were fundamental to living a wholesome life.

There are many Malyunkyaputras among us. Most of us ‘need to know’ whether the soul exists or not, whether there is god or not, and what would happen of our devotion to our own religion if we followed the Buddha’s words. It is quite natural.

As somebody born and raised in a non-Buddhist family, I can understand when people become skeptic of the Buddha’s teachings. Over the years, these teachings have been established as a religion, although he had no intention of starting a religion. It is very natural that we doubt if we need to quit our religions and convert into Buddhism to understand what the Buddha taught.

You can continue to pay obeisance to your own god or gods or goddesses and still benefit from the Buddha’s teaching of developing wisdom and compassion. Becoming a Buddhist or not is your choice, but you can definitely be a light onto yourself. You can be free of your suffering, here and now, in this very life, if you understand your own mind.

Making your own wood fire pizza

This is for those who enjoy hosting a barbeque party for their family and friends. In case you didn’t know,... Read More...