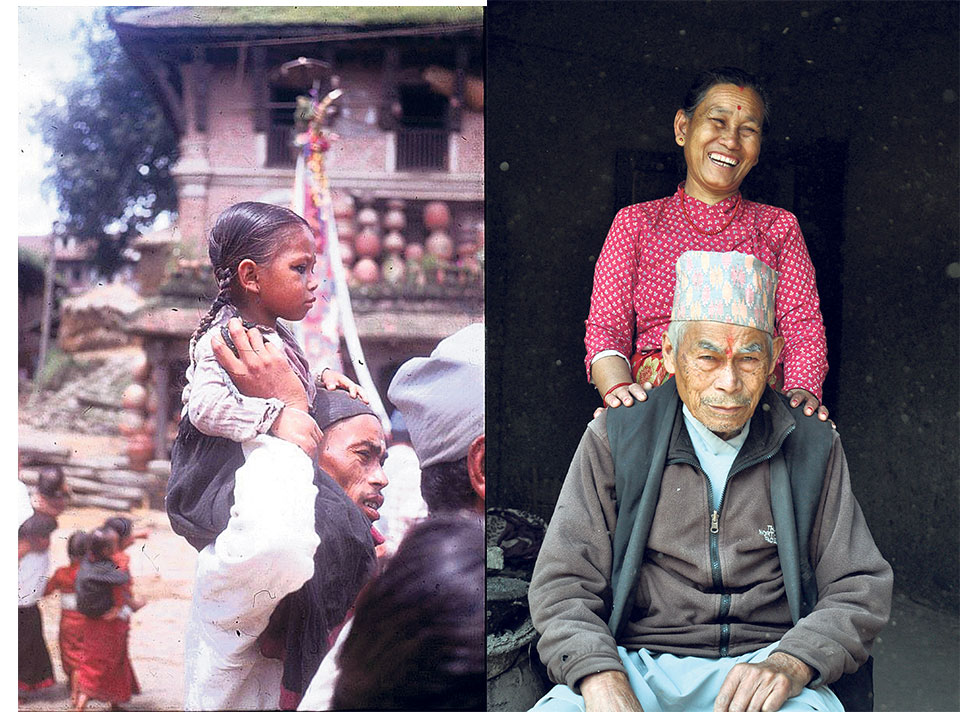 BHAKTAPUR, April 28: A little girl of around 10  rides comfortably astride her father’s shoulders as they watch the merry  crowds  in the historic town of Bhaktapur. A jatra is underway and the ambiance is festive. The touching sight of the child-man bond catches the attention of a passing tourist. He feels moved enough to capture it  in his camera . It was 1968 and the photographer was Jim Coleman. Half a century later, the chance photo has caught up with the father and child, and with Coleman also.

Thanks to digital technology,  the snapshot of yesteryear surfaced  in a website, and the child, who is now a  60-year-old grandmother,  came to know of it.

“Oh my goodness! That was me with my father. I was the eldest among my sisters and the most pampered,” exuded Krishna Laxmi Prajapati. “And the man who took our picture is also alive? It’s wonderful  to know that!” she added while gazing closely at the photo .

The photo was noticed on an internet site by this journalist who was familiar  with the Bhaktapur neighborhood where it was taken. When he traced the family and showed it to them, father and daughter were both  awestruck. The photo appeared in Nagarik on 10 April.

“ We could see him in the newspaper, and it was such a lovely moment,” noted Laxmi’s father Krishna Bhakta. When the photo was taken, Krishna was in his 30s.

“I am old and feeble. I can no longer carry a child on my shoulders,” he said laughing. “My youth is captured in the photo, and I’d love to thank the photographer,” he said, sounding quite grateful.
Meanwhile, Coleman said in an internet chat that he was no less happy to learn about the father and child. For Coleman, the father and the daughter were characters of his photograph 50 years ago, only to become a fond memory that would rejuvinate the family years later.

Coleman, a British national, is a frequent traveller. He has come to Nepal several times, the last time  just a year back. He had posted the photo on the site ‘Old photographs of Nepal’. That was how it was spotted by this journalist.

Jim Coleman in this picture taken in 1969.

“I feel really good about it,” Coleman responded.

Going down memory lane, he said Kathmandu Valley was different then. There were fewer houses and the roads appeared wider.

“We would travel around by cycle quite comfortably. I had been to Bhaktapur that day the same way. Gaijatra was going on. It was awesome. There was a bear dance, and everything was so lovely. But loveliest of all was the child on the man’s shoulders. My instinct said that must be father – daughter. I was so overwhelmed and captured them in my camera,” he narrated.
He clicked the image and went away. No conversation took place. But now, if it comes his way, he’d be happy to meet them,  he said.

Krishna Bhakta  says he is too old and can meet people only if they come to him. “If by chance, he comes, I’d welcome him from my heart.  I’m an old man  and cannot go anywhere  on my own,” he lamented.

In those  days, all gores (fair-skinned Westerners) would look the same to Krinsha Bhakta. But now, this  gore feels special.

“He  feels quite special,” the octogenarian said, laughing heartily.

Wish I could be a father

When I see kids around Playing and talking Caring and calling I wish I could have my own. ... Read More...

KATHMANDU, JULY 11: Federation of Women Entrepreneurs’ Associations of Nepal (FWEAN) celebrated their anniversary for the first time on the... Read More...

NRB flexible on transaction via electronic wallet, while being stern on fee of interbank ATMs uses
18 hours ago
Ruling coalition in Jeopardy
13 hours ago