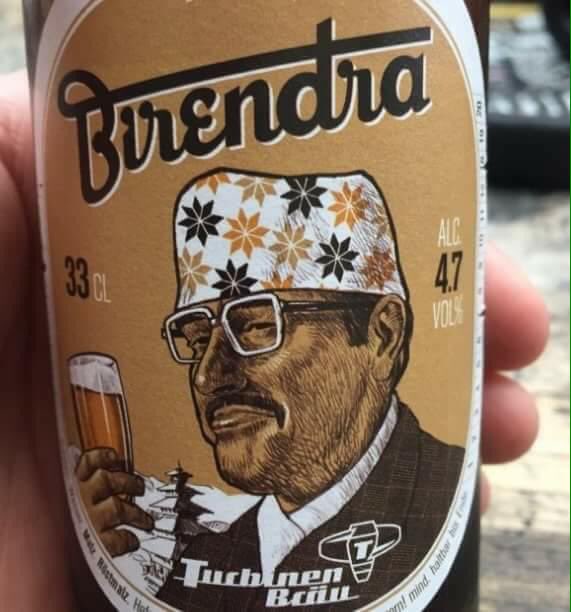 A craft brewery in Switzerland has triggered anger and protests from the other side of the world after it named a new beer after a former King of Nepal.

Because the beer included a Nepalese spice, the Turbinenbräu brewery in Zurich decided to name one of its seasonal beers after King Birendra, who reigned over Nepal from 1972 to 2001 - and whose name the brewery thought sounds like beer.

But the Swiss brewers had inadvertently stumbled on the name of a deeply emotive figure in Nepal whose legacy is still hotly contested despite the overthrow of the monarchy ten years ago.

Last week the brewery was contacted by the Swiss ambassador to Nepal with an urgent request to take down all online advertising for the beer following a furious reaction in the country.

There were unconfirmed reports of protests outside the embassy, and threats of a “hard campaign” from a royalist political group.

The Swiss brewers were stunned that their choice of name has caused such deep offence in Nepal.

“We want to tell a story with beer and not polarise or provoke,” Adrien Weber, the brewery’s managing director, told Switzerland’s Tagesanzeiger newspaper.

“The ambassador told me on the phone on that there are currently tensions against foreigners in Nepal, and that he had to increase security because of our beer.”

Mr Weber said he had chosen the name because the beer contains a spice associated with Nepal. “I was looking for a Nepalese name that does not sound trite, like Everest,” he said.

The brewery settled on Birendra because it sounds similar to beer, he said. The beer is adorned with labels showing the late king enjoying a glass, and promored with the slogans “Beer is King”.

Birendra, a highly popular ruler, was killed in 2001 in a palace shoot-out, the full details of which remain disputed to this day. According to the official version, the king and eight other members of the royal family were gunned down by a mentally disturbed Crown Prince Dipendra, who then turned the gun on himself.

But many Nepalis do not accept this version of events. The massacre wiped out almost the entire royal family, leaving Birendra’s brother Gyanenda to take the throne.

Gyanendra proved a deeply unpopular king, and he was deposed in 2008, bringing an end to the 240-year-old Nepalese monarchy.

“What the Swiss brewery did is disrepectful,” an unnamed Nepalese business man told Tagesanzeiger. “Birendra was a highly respected and popular king. Depicting him with a glass of beer, almost as an alcoholic, is an insult to the Nepalese people.”

“The beer company of Zurich is using the name and photo of our respected humble beloved late King Birendra which is offensive to every Nepali,” RoutineofNepal Banda wrote on Twitter.

Two arrested for raping and murdering a minor
49 minutes ago