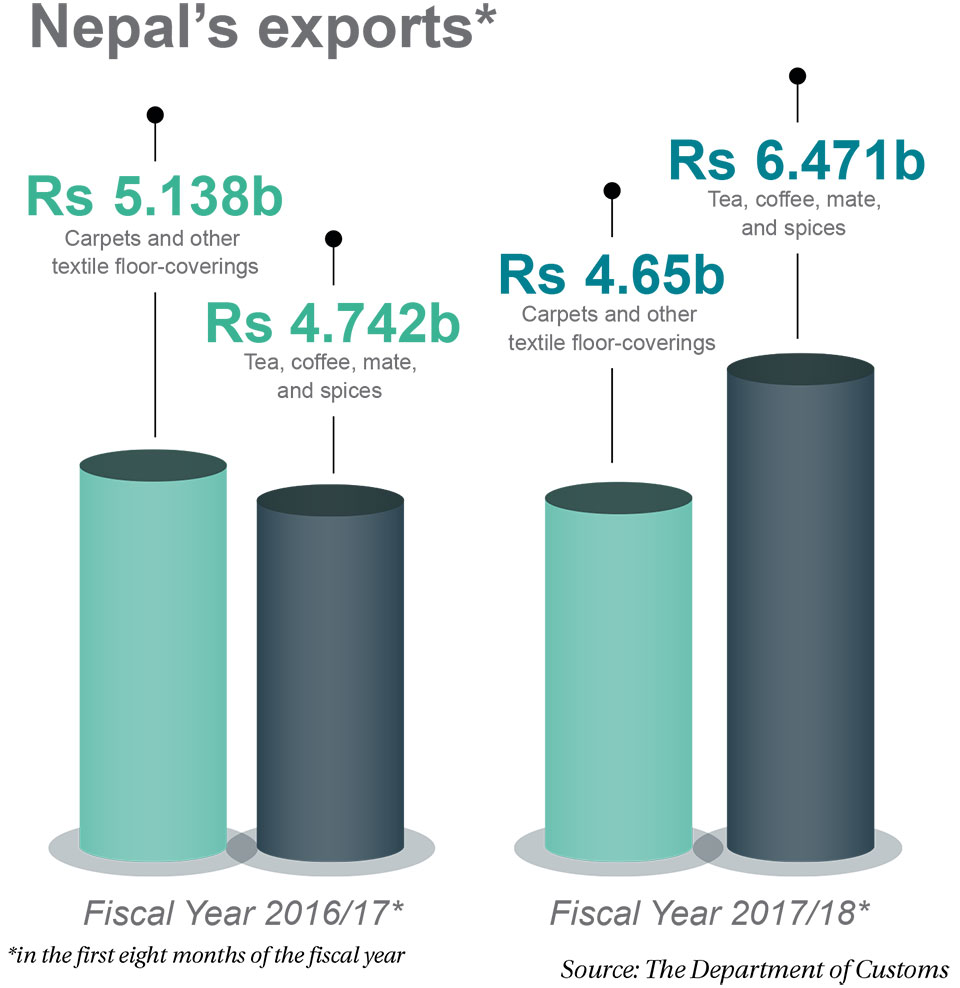 KATHMANDU, April 26: The export of tea, coffee, mate, and spices jumped 36.5 percent to Rs 6.5 billion in the first eight months of Fiscal Year 2017/18 as compared to statistics of last year to top the list of Nepal's exports.

"The surge in demand for tea in India as well as other international markets, as a result of the five-month Gorkhaland riots in Darjeeling, is the chief contributor to the hike in export of tea from Nepal," said Suresh Kumar Agrawal, president of Nepal Tea Planters Association (NEPA).
According to Agrawal, nearly 15 million tons of tea, including both orthodox and CTC tea, is exported from Nepal every year. "While the export volume of CTC tea is nearly double that of orthodox tea, the export value of orthodox tea is higher by nearly a third," he added.

While tea entrepreneurs cite the rise in export of their product to political instability in pocket areas for tea production in India such as Darjeeling, coffee exporters boast of superior quality of Nepali coffee to be the key reason behind the increased demand and export.

"Nepali coffee is among the best in the world. As per the US-based Specialty Coffee Association, a majority of coffee produced in Nepal scores above 85 in the coffee index, which is rare and among the finest in the world," Shyam Prasad Bhandari, chairperson of Nepal Coffee Producers Association, told Republica. "As Nepali coffee is getting recognized across the world, its demand has been soaring and so is its price and export."

Bhandari further added that while the demand for coffee in the international market is increasing, entrepreneurs have not been able to raise their production accordingly. He and stressed that the government should collaborate with private parties to help increase production.

Meanwhile, hand-knotted carpet, which was the country's largest exports in the last fiscal year, dropped to third place in the first eight months of FY2017/18. The export value of carpet and textile floor fell by 9.5 percent to Rs 4.6 billion in the review period of FY2017/18.

The country exported hand-knotted carpet and textile floorings worth Rs 5.1 billion in the first eight months of the previous fiscal year -- FY2016/17.

Speaking with Republica, Ram Bahadur Gurung, president to Nepal Carpet Exporters Association, stated that the fall in export value of carpet is because Nepali handmade carpets are expensive and that these products have not been able to compete with cheaper Indian, Chinese and Turkish alternatives.

"We have neither been able to promote our products as much as our neighboring countries, nor we have adequate manpower to increase production. This has caused delay in production and ultimately delivery of products to our clients," Gurung added.

He also said that provision of concessional loan would have made things much easier for carpet producers.

Gurung demanded that the government increase frequency and scope of such trainings to increase carpet production.

Tea, coffee farming to be expanded in Sagarmatha zone

SOLUKHUMBU, May 7: Three districts of Sagarmatha Zone -- Solukhumbu, Okhaldhunga, and Khotang -- have been found suitable for tea and... Read More...

Nepal's politics is in a serious and sensitive situation: NCP General Secy Chand
4 minutes ago