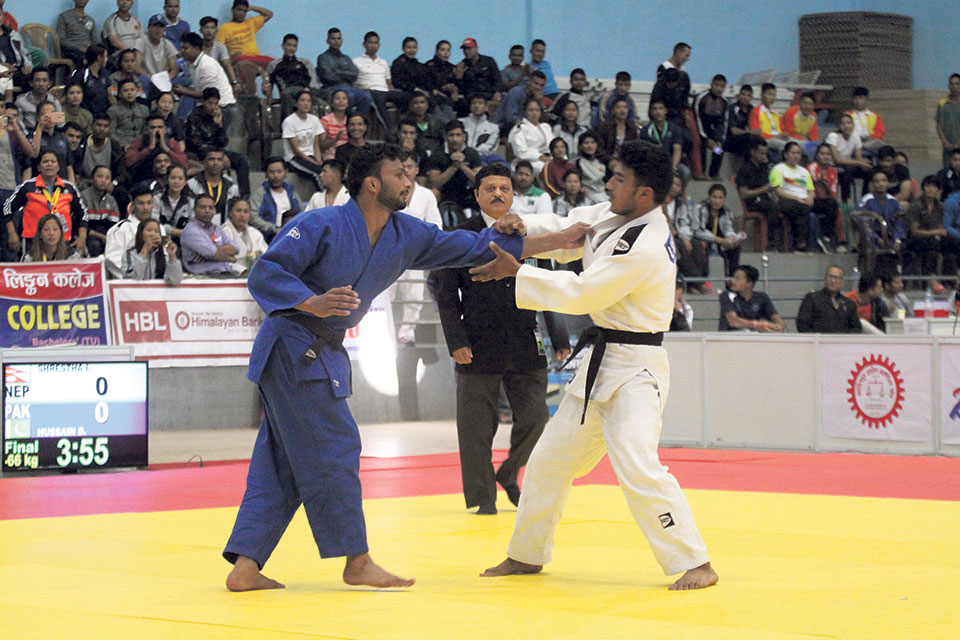 KATHMANDU, April 23: Indra Bahadur Shrestha spared the blushes of host Nepal by winning a gold medal in the ongoing eighth South Asian Judo Championship on Sunday. The nineteen-year-old defeated Babar Hussain of Pakistan in the final to clinch Nepal’s second gold in the tournament, which sealed Nepal’s place in the second position after India in the regional tournament.

Earlier, Shrestha had defeated an Indian opponent in the semifinals, a feat achieved by a Nepali male judoka for the first time in 23 years.

He defeated India’s Ankit Bista in the semifinals of men’s U-66 kg category at the Army Physical Training and Sports Center in Lagankhel.

Shrestha said that his happiness knew no bounds after winning an international gold medal for the first time.

“After defeating India in the semifinal, I was confident of winning the gold medal. India is the strongest opponent in this region,’’ Shrestha, who had won a bronze medal in the 12th South Asian Games (SAG) in Guwahati in 2016.

Other two gold medalists of the 1995 games – Bir Bahadur Rana and Jeet Bahadur Chaudhary - won the medals in the events which were not participated by Indian players.

Another Nepali player Saroj Maharjan had won gold during sixth South Asian Judo Championship held in Pakistan in 2011, but at that time India’s player, Navjot Chana, was absent due to a shoulder injury.

On Sunday, India added six more gold medals to its overnight tally of four to finish first in the championship with a total of 10 gold medals and three bronze medals.

In women’s U-78 kg final, India’s Jina Devi Choangtom defeated Punam Shrestha of Nepal to win the gold. The Indian player won the match after her opponent got three fouls and was disqualified from the match. Until then, both the players played full time without any score. During the golden score, Shrestha was adjudged of committing foul for the third time and was out of the
contest. Bhavana Gharti Magar of Nepal and Beenish Khan of Pakistan stood third.

In women’s U-70 kg final, Garima Chaudhary won all of her four league matches to win gold. She defeated Farina Khanom of Bangladesh, Sunita Magar of Nepal, Samjhana Chaudhary of Nepal and Ruwani Jayarathna of Sri Lanka in the league matches. Farina Khanom of Bangladesh secured second position while Ruwani Jayarathna of Sri Lanka and Sunita Magar of Nepal finished joint third.

MCC should be passed after revising some provisions: Thapa
15 hours ago