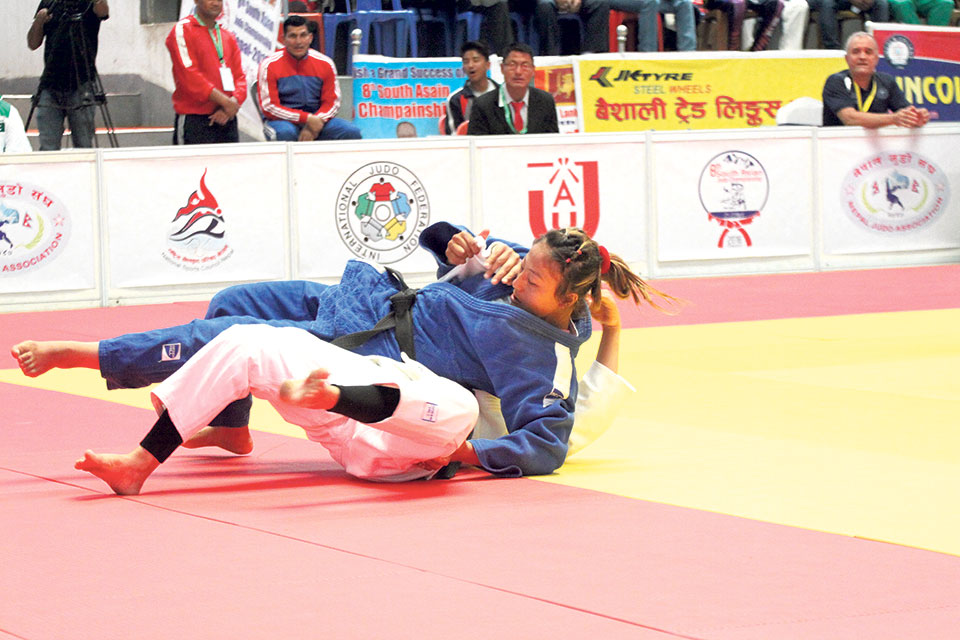 KATHMANDU, April 22: Nepal’s Ravin Shrestha became the first and the only gold medalist for Nepal in the eighth South Asian Judo Championship on Saturday.

Shrestha defeated all three of his opponents including his compatriot Suryaman Lama, Bandula Bajjala of Sri Lanka and Md Abdul Kalam Ajad of Bangladesh to secure the gold in men’s U-100 kg league matches held at the Army Physical Training and Sports Center in Lagankhel. Kalam secured second place and Lama finished third.

India started the championship in a positive note winning four gold medals in the opening day. Likewise, Pakistan won two golds and Nepal finished with one gold medal with seven more golds up for grabs on the second day of the tournament on Sunday.

The tournament is featuring the host Nepal, Bangladesh, Bhutan, India, Pakistan, and Sri Lanka, while the Maldives is not take part this time.

Nepal has two teams in the regional competition while all the other participating countries have one team each comprising of nine male players and nine female players. Nepal, by the virtue of being the host, is allowed to feature 36 players divided in team A and B.

“We are preparing for the Asian Games and we have set the goal of qualifying in the Olympics directly and not from wild card,’’ said Nepal Judo Association President Deepak Harsha Bajracharya.

Likewise, NJA General Secretary Dharma Kumar Shrestha thanked all the well wishers and supports for their generous support in organising this event.