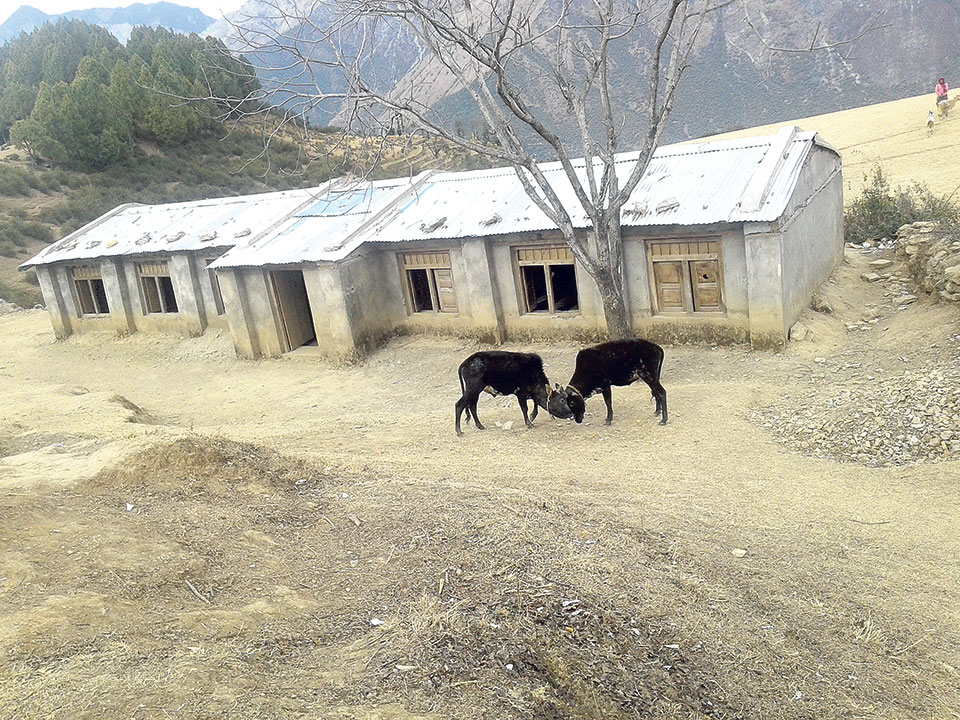 Calves fighting at Ratna Secondary School, Kholek which wears a deserted look due to the absence of students and teachers who have reportedly gone to the highlands to pick Yarsagumba, a prized herb with aphrodisiacal properties.

BAJHANG, April 22: With the beginning of the new academic session, parents were just preparing to enroll their children to schools when a large number of schools in the rural parts of Bajhang were shut down due to the arrival of the Yarsa-picking season.

Teachers started heading toward the hills after publishing the result of the final examinations. Kalak Rokaya, who recently appeared for the final exams of grade 6 from Dhuli Lower Secondary School, informed that there are no teachers in the village to teach students who are keen to study. He further informed that some teachers persuade students to join them in picking Yarsa. Every year, Rokaya and many students like him have to appear for the final exams before the completion of the course.

Similarly, Janak Bohora, a fifth grader of Tapovan Primary School, wanted to go to the hills for picking Yarsa after his admission but he could not meet his teachers even after visiting the school not just once but three times. As a result, he had to move toward the hills before his admission. According to Bohora, they can collect Yarsa worth more than Rs 200,000 in three months. This is the reason why most of the students here get enrolled in the month of July. Rarely, any of these schools complete their course before the end of the academic session.

Rajendra Dhami, chairperson of Saipal Rural Municipality, informed that a meeting was held between the parents, teachers, students and representatives of the local unit for upgrading the standard of education of schools but that didn't pay off.  As most of the teachers didn't return from their vacation, the school authorities could not continue their education.

Chairperson Dhami stated that the pay of the absent teachers will be deducted from their salaries from now onward. Poverty is the main reason why students are obliged to go for picking Yarsa by putting their education at stake.

There are altogether 397 primary schools, 40 secondary schools, 39 higher secondary schools and 293 child development centers in the district.  After the formation of the local government, the responsibility of inspecting and monitoring these schools has been transferred to the local unit from the District Education Committee (DEO).

These days, cow, sheep and goats are the common view in the schools as there are no students. In fact, locals have started conducting bull fighting on the premises of the schools for passing time.

DOLPA, May 1: Schools in remote areas of Dolpa have started wearing a deserted look as students prepare to head... Read More...

BAJHANG, May 11: Without the consent of the District Education Office (DEO), 60 schools of Bajhang have announced three months of... Read More...

Kathmandu: Balen Shah takes a lead of 8000 plus votes against UML’s Sthapit
9 hours ago

Ballot papers found quoted with ‘No Vote’
2 hours ago