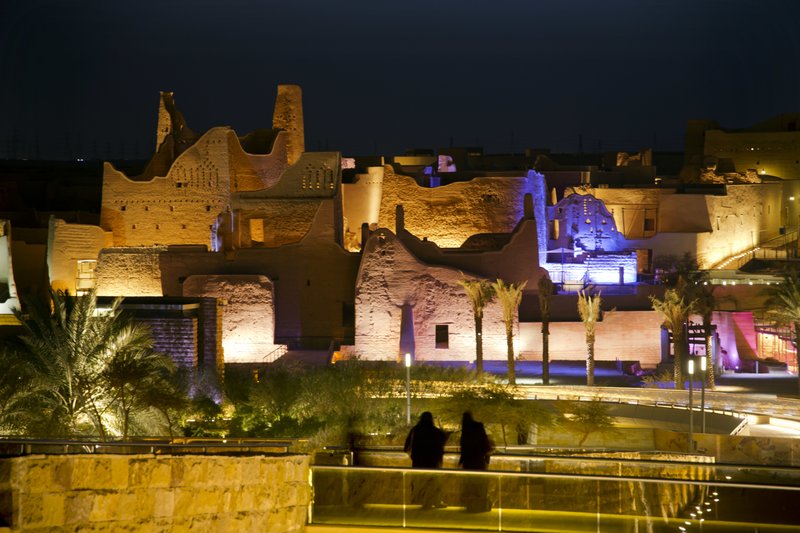 DIRIYAH, April 21: Just outside Saudi Arabia’s capital Riyadh, a group of elementary school children are on a field trip at Diriyah, where engineers and construction workers are busy restoring a 17th-century fortress, mosques and clay-colored structures that were once the ruling family’s seat of power.

The UNESCO World Heritage site lies in a conservative, arid patch of the country and is unlikely to feature high on any bucket lists for world travelers, but the kingdom is hoping to alter perceptions as it prepares to open the country to tourist visas and international tour groups later this year.

Diriyah lies at the heart of Saudi Arabia’s efforts to both control the narrative of its past for future generations of Saudis and to revamp its image to curious world travelers.

It’s an especially important site to the ruling Al Saud family because it’s here where the first Saudi dynasty was founded in the 15th century. The architecture here is associated with the tribes of Najd, the landlocked region in the heart of the Arabian Peninsula that is now home to Riyadh and surrounding cities.

In the 18th century, Diriyah rose to become once again the center of power for the Al Saud, but fell under Ottoman control in the early 19th century. It would take more than a century for the Al Sauds to reclaim Diriyah and found the current Saudi state— named after its ruling family.

Today, much of Diriyah remains closed to the public as authorities work to restore it to its former glory — except this time fitted with the modern comforts of air conditioning and plumbing. The area around the fortress resembles a modern desert oasis with palm trees, parks, restaurants and coffee shops, drawing young Saudis and families in the cooler months looking for green, open spaces away from the congested streets of Riyadh.

“There is an amazing amount of history here,” said Chris Brooks, who frequently comes to Riyadh on business. With a few hours to spare between meetings, he decided to visit Diriyah and take some photos to share with his family back in the U.K.

Still, it’s not a place he’d encourage his family to visit just yet.

“It’s going to take some convincing families to want to come here,” he said. “To open up, you need it to be more welcoming, more accessible. It takes a lot of time to get a visa to come here and if they address those issues then I think, yeah, more people will come here. There is just so much to see.”

For the kingdom’s 32-year-old heir to the throne, Crown Prince Mohammed bin Salman, Diriyah is part of a much larger national project to overhaul the country’s economy and make it more resilient in the face of lower oil prices. Boosting domestic spending and opening the country to foreign tourists are seen as ways to create more jobs for the millions of young Saudis who will be entering the workforce and looking for jobs in the coming years.

Though Saudi Arabia may seem an unlikely destination for a holiday, it boasts regions where ancient Christian and Jewish communities once thrived, historic forts, a stunning Red Sea coastline and a diverse culture molded by ancient trade and pilgrimage routes.

Saudi tourism authorities are planning to open five museums inside Diriyah and a research center named after Sheikh Mohammed Ibn Abdul-Wahhab, whose ultraconservative teachings of Islam in the 18th century are widely referred to as “Wahhabism” in his name.

Abdul-Wahhab was a pivotal figure in the foundation of the current Saudi state who helped the Al Saud family conquer tribes by using both the sword and the gospel. His legacy, however, is also associated with some of the most extreme interpretations of Islam that have been used to justify killings by al-Qaida and the Islamic State group.

A descendent of Abdul-Wahhab, Abdulmajeed Al-Sheikh, has worked as a tour guide in Diriyah for the past 12 years. He says the research center will be a place for Islamic scholars and academics to learn about the principles of Abdul-Wahhab’s teachings and how he helped unite disparate Arab tribes under the banner of Islam.

In a short presentation shown to visitors of Diriyah, Abdul-Wahhab is described as a moderating force — as someone who revived the true teachings of Islam that were first revealed to Prophet Muhammad in Mecca some 1,400 years ago.

“His words basically say that if you don’t do this you should be killed. You’re a non-believer. It’s not an obscure part of his writing,” said David Commins, a professor at Dickinson University in Pennsylvania and scholar on Islam in Saudi Arabia. “For them to rewrite the creed of Ibn Abdel-Wahhab and say it’s something else they’re going to have to do some heavy editing.”

For Saudi visitors, the center could serve as a way to reinterpret Abdul-Wahhab’s teachings as the crown prince pushes forth social reforms that curb the influence of Wahhabism. For foreigners, it’s a way for the government to put forth its own narrative about one of the country’s most controversial figures.

Natana DeLong-Bas, a professor at Boston College and the author of “Wahhabi Islam,” says that for more than a decade the kingdom’s rulers have been trying to create a sense of “wasatiya and wataniya” or moderation and patriotism among Saudi citizens.

“Religion is welcome as something that drives morals and ethics, but it is not going to be as linked to state activities as it has in the past,” she said.

Tourism official Salah Altaleb, who’s overseeing investments in the tourism sector, said visits to sites like Diriyah will help tourists “correct” the image they may have of Saudi Arabia.

“Once they come here and see the country, I think the marketing literature tells us that they would go back and tell their family and friends and relatives about what they experienced and things will start to change then,” he said.

A diplomatic row means Saudi Arabia will be pirating all 64 matches of the World Cup after banning the sports channel in... Read More...